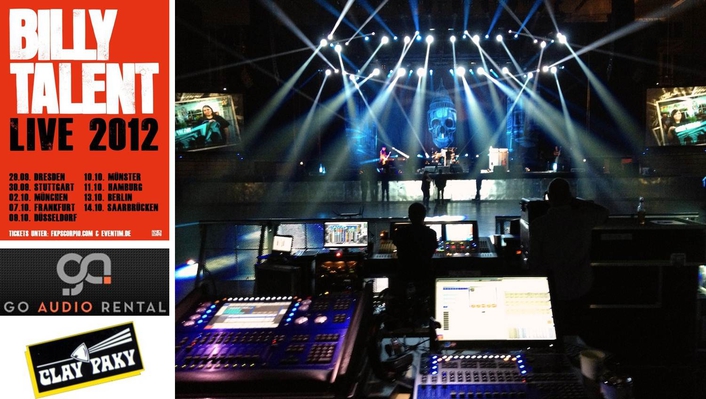 .
Canadian rockers Billy Talent celebrated the release of a new album in September by jumping straight into an arena run of Germany and central Europe. Having tested the touring waters on the summer European Festivals, the production and design was in the works and big things were being planned. Lighting Designer Dara Guiney had worked with the band briefly in 2010 and was invited to come aboard for the new album touring cycle.

The band are very much into big chorus rock looks with smooth verses. Dara had specified 28 Alpha Beam 1500, 24 Alpha Profile 1500 and 16 sharpys. “The power and beam from Clay Paky fixtures I find unparalleled at present and their reliability is fantastic. The fire power chosen had the ability to go from slick smooth looks to iris beam chaos without haste and the beams go for miles.”

The design incorporated three straight lighting trusses with four angled trusses to make two u shaped trusses. These held all profiles, beams and the sides held the sharpys. “I wanted the sharpys to create an ACL look by having four on each side, four on the mid stage and four on the floor. I could write chase effects that would have that old time feel to them but with fantastic beams especially when using the spot gobos.” All lights were placed at different heights to provide a layered approach and to interact with the soft good trusses.

This made for a very clean overhead design and gave the illusion that there was not as many fixtures in the air until they all fire up. Six Alpha Profile 1500 and four Sharpys were placed behind the backline for additional layering. 16 par cans were also scattered about the backline to give a warm glow during the show. “I'm not a fan of lights hanging all over the place and looking like junk, hanging for no reason except for candy, so the clean lines in the design were a must and there is a lot to be said for simplicity. I wanted to create a classic rock show that is warm and saturated but has these huge wide looks that come from nowhere and kicks it into 2012.”

This was both the Designer and Bands first time using these fixtures and all were happy with the outcome. “I had used the fixtures on various festivals during the summer and was impressed. What surprised us all were the Alpha Beams, such a versatile fixture with fantastic color mixing capabilities. I expected everyone to love the sharpys as they are the flavour of the month but I was quite surprised how the band were really into the Beams, they loved how an amber gives a red hue in the center and how a white can give a blue outer ring. I would have to agree wholeheartedly.”

All lighting techs, lighting, trussing, rigging and control were provided by Go Audio Rental Gmbh, who provided unparalleled support for the month long tour. “I have worked with Go Audio before and was always happy with the way they conducted themselves and the quality of product. This was my biggest rental with them and they delivered tenfold. The techs they sent me were the best in their field and were a pleasure to work with.”