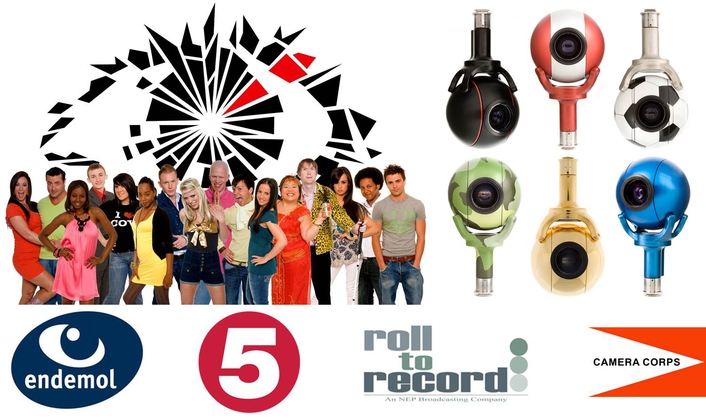 Camera Corps announces the sale of 38 remotely controllable Q-Ball and MiniZoom cameras to Staines-based Roll to Record, an NEP Broadcast company. The cameras are being used on the autumn 2011 series of Big Brother which is being produced for Channel 5.

“We have worked on more than 10 Big Brother series,” comments Mick Bass, Commercial Director of Roll to Record. “Camera Corps’ Q-Ball and MiniZoom are ideal for this series which is the first Big Brother UK to be broadcast in HD. We are using a total of 23 Q-Ball motorised pan/tilt cameras and 15 MiniZoom static heads located in various positions around the house on the George Lucas stage at Elstree.

“Q-Ball produces excellent images. Its smooth motor acceleration enables very accurate on-air tracking shots. The 10-times optical zoom allows us to move from wide angle to close-up from a single viewing angle. And the head itself looks neat and compact when seen in shot from another camera.

“The MiniZooms have been positioned wherever fixed-angle cameras are required. They use the same imaging electronics as Q-Ball and the same zoom. All 38 cameras are being operated from a single Camera Corps Joystick Control Unit and Multi Camera Keypad. The entire system is easy to drive and extremely efficient.”

Big Brother UK is the British version of the 'Big Brother' format which originated in the Netherlands and takes its name from a character in George Orwell's 1948 novel Nineteen Eighty-Four. The British series was originally broadcast on Channel 4 and E4 from 18 July 2000. Channel 5 formally signed a two-year contract to screen Big Brother from August 2011.

An NEP Broadcast company, Roll to Record (www.rolltorecord.co.uk) has over 20 years of experience providing semi-permanent broadcast studio installations and robotic camera systems for reality television, game shows and entertainment series. Working with the UK’s leading production companies and broadcasters, it has created pioneering and memorable programmes such as Richard and Judy, Saturday Kitchen and The Salon.

Based on the site of the former Brooklands motor-racing track, Camera Corps specialises in providing high-volume support services for reality television programmes as well as very large-scale sports events. The company has achieved a pre-eminent reputation for its ability to acquire exciting and unusual television content from exceptionally challenging environments. The Camera Corps team expands during large-scale events from 16 staff based near London’s Heathrow airport to as many as 200 specialists, including professional climbers who are very experienced at rigging camera systems at height in almost any location.