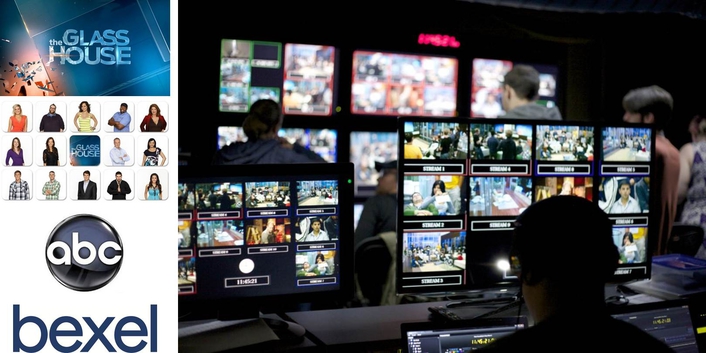 The Glass House features 14 contestants living and competing for a quarter-million dollars in a state-of-the-art house that is under complete surveillance, with no access to the outside world. The contestants aren’t just competing with each other, but also playing the game to win over the audience each week.

Bexel supplied more than 50 cameras for The Glass House, including close to 40 robotic cameras, seven fixed cameras and eight large studio cameras/handhelds for the show. Among these were Panasonic’s new AW-HE120 2.2 mega-pixel robotic cameras. Not only do the Panasonic robotic cameras provide excellent picture quality, their entire control system is IP-based. This makes it easy for busy show staff members to deploy the cameras and use off-the-shelf equipment for camera control.

“The Glass House is a large-scale job that integrates some of the more complicated equipment that we own,” says Johnny Pastor, director of technical services, Bexel. “From rigging to the engineering and large router infrastructure this is an ideal project for us, as Bexel's expertise and experience is a perfect fit for these types of reality shows.”

The production also called for robotic cameras with infrared capabilities. For those, Bexel turned to Camera Corps and its Q-Ball. The Q-Ball is Camera Corps’ latest HD/SD pan-and-tilt camera system, combining both appearance and performance in the smallest system currently available. The Q-Ball incorporates a built-in 10x zoom optical lens and smooth accelerating pan/tilt motors in a sturdy, fully weatherproof aluminum sphere with a diameter of 115 mm/4.5in.

For the project, Bexel also built a custom HD control room with a large fiber infrastructure and custom work benches for producers and loggers. A PESA router was utilized with a distributed audio routing system, which made the cabling very easy—requiring the team to simply interconnect everything using fiber.