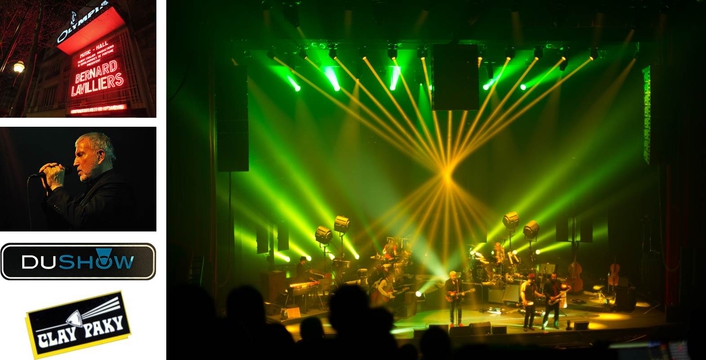 The Sharpy Beams send their extremely powerful light beams all over the place
Laurent Chapot, French rocker Bernard Lavilliers' long-standing, faithful and talented lighting designer, has come up with a creative, ingenious lighting design at the legendary Olympia in Paris. It is almost completely based on low consumption lights, provided by the French audiovisual equipment supplier Dushow.

Laurent Chapot has recently become "energy saving aware" and has started favouring "cleaner" light. However his choice is also motivated by a desire for a greater variety of easy-to-transport and easy-to-install lighting equipment, without ever compromising on light quality for any reason.

With this in mind, the "old" French stars' favourite lighting designer chose twenty four Clay Paky Sharpys: twelve Sharpy Beams, whose success and quality need no proving, and twelve new Sharpy Washes, which he uses to create a stage backdrop and illuminate an elegant, sober cyclorama with 190 W and 330 W lamps respectively.

Laurent Chapot, who "prefers to have several different small lights rather than a few large sized ones", had no choice but to turn to these compact, powerful and reliable lights. "There is enormous variety in this 300 W (approx.) range, and I can enjoy myself discovering or rediscovering lights I am fond of. However my choice does not allow exceptions: the equipment must first of all provide a high quality light output, as in the case of Clay Paky Sharpys."

His design is intentionally devoid of frills, as the artist himself wanted, and alternates innovation with tried and tested elements: "The kit is - as always - varied," explained Laurent Chapot, "because each light has a precise function, and I personally comply with certain arrangements that are very dear to me, like alternating LED washlights with spotlights for the front lighting, and placing LED lights under the drums. We have installed some high performance compact Sharpy Beams so they shine down from above. They may be used to create mid-air visual beam weaving effects. There are also some Sharpy Washes on the ground that 'paint' the cyclorama with colour and produce a light curtain that shines from the ground upwards. 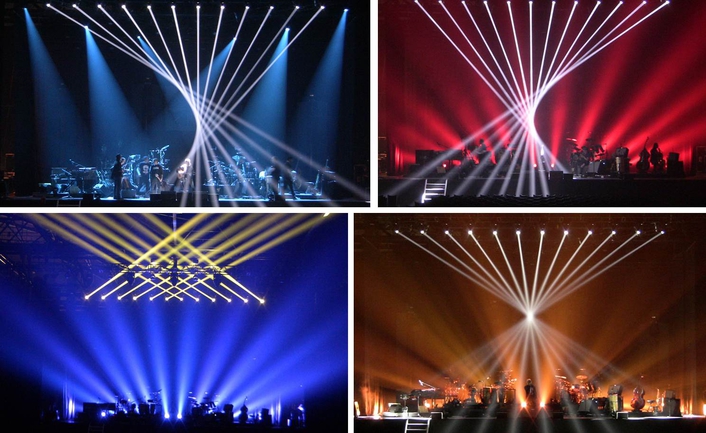 I chose the Wash version of this light with arc discharge lamp because it was the only one that was powerful enough with its 330 watts, and I am very happy with its light output. The colours are beautiful and its functions are packed with lively effects both when working with a 'narrow' beam angle and at maximum aperture."

However, even though the lighting designer always works with the artist's full trust and tacitly has carte blanche for the whole design, the tour specifications were very precise. The requirements concerned both the budget (small lighting team, two semi-trailers, use of the least expensive high performance lights, such as the Clay Paky Sharpys) and the artistic choices: Bernard Lavilliers specifically requested sobriety. He said he wanted to perform on a set that was elegant, but that did not have large video screens, excessive scenic arrangements or other unnecessary contrivances.

It was therefore not easy to impose the use of video totems.

Laurent Chapot explains that he "had to work really hard to convince Bernard Lavilliers of their usefulness, mainly by proving that the video would not have been invasive and it would not have stolen the scene."

"Even though I knew what I was doing, his reluctance turned out to be a veritable challenge. We had to carry out tests with these totems, first and foremost to demonstrate the quality of the material chosen, then to show that the video itself could be used in a sober, discreet and effective way that was always in keeping with the lights. They form a set of completely hidden windows thanks to the use of SMD black face panels, which are invisible in the darkness. The scene, which is projected, is seen through them. The depth effect is amazing, according to the case."

The Sharpy Beams send their extremely powerful light beams all over the place, also thanks to mirrors on motorized moving heads, which multiply them!

The lighting designer takes great pleasure in managing the show lighting and video himself using a GrandMA2 console. He is helped by lighting operator and long-standing co-worker Laurent Garnier. “I always love to use video together with lights, " Laurent Chapot said. "We have a Catalyst Media Server and two lighting consoles. We share the system on an open network so we can work on each other's consoles, for instance during the 'ballet of the Sharpys', where one of us takes care of the rhythmic precision while the other inputs the colour and movement changes."

The result is yet another beautiful light show. His team share Laurent's enthusiasm for consoles and for the set, which is - as always - the ideal backdrop for Laurent's lighting skills.

Nothing is left to chance in Laurent Chapot's design and this concept is at the heart of his creations and choice of lights. Even the amount of smoke he uses is always skilfully measured, especially in this case since the venue is not exactly ideal for smoke effects.