The Elton John gig was project managed for Woodroffe Bassett by Terry Cook, who was also the Associate LD
Battersea Power Station Development Company on behalf of its shareholders, SP Setia, Sime Darby and Employees Provident Fund hosted a concert by Sir Elton John to thank everyone who is helping to make the development of the iconic Power Station a reality.

The event featured a lighting design by Patrick Woodroffe, with Robe moving lights on the rig and equipment supplied by west London based Colour Sound Experiment.

A glittering array of celebrities turned out in force to attend where they and a capacity audience of 2500 were treated to a rousing 90 minute set of Elton’s classics.

As well as Patrick Woodroffe being Elton’s long term Lighting Designer, his company Woodroffe Bassett Design are acting lighting consultants for the entire Battersea Power Station development project, where their brief involves ensuring that there is continuity across the lighting of all architectural and environmental elements.

The Elton John gig was project managed for Woodroffe Bassett by Terry Cook, who was also the Associate LD, and for Colour Sound by Steve Marley

It took place in a 60 metre long by 30 metre wide clear-span tent installed inside the heart of the Power Station – currently the shell between the four famous 103 metre high chimneys, so the magnificent industrial architecture which was especially lit for the occasion, could be enjoyed by all. 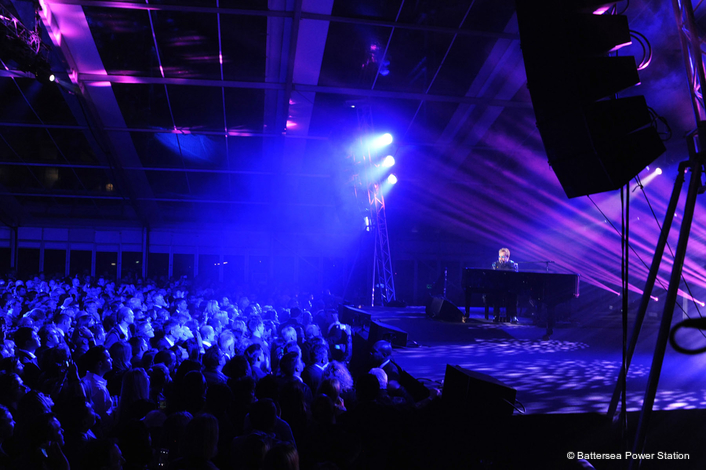 Inside the tent there was a performance stage, and this is where the Robes were installed – on a ground supported rear truss, a flown front truss and a flown spine truss running down the centre of the tent.

The LEDWash 300s and the MMX Spots were on the back truss utilised for wash and beam functionality. The LEDWash 600s were rigged on the ground supported trussing PA wings, giving a handy side lighting position, and the LEDWash 1200s and Pointes were on the floor.

These were programmed under Patrick’s direction to produce a spectacular show by Sir Elton John’s regular Lighting Director Andy Pygott using a grandMA console which was supplied by Neg Earth.

The lighting equipment illuminating the building exterior was supplied by PRG and the stunning projections onto the front of the Power Station were created by Drive Productions.

Colour Sound is one of the UK’s top lighting and visuals rental companies and have invested heavily in Robe for their hire stock. Their most recent purchases this spring included nearly 100 new Robe fixtures for a slightly crazy upcoming summer season including 60 of the hugely popular multi-purpose Robe ROBIN Pointes!

Robe Pointes Take Interga...Trip for A Marte Cabaret
Robe Celebrates 10 Years of Bellowhead
Robe Gets into the Groove with Vitality Tour