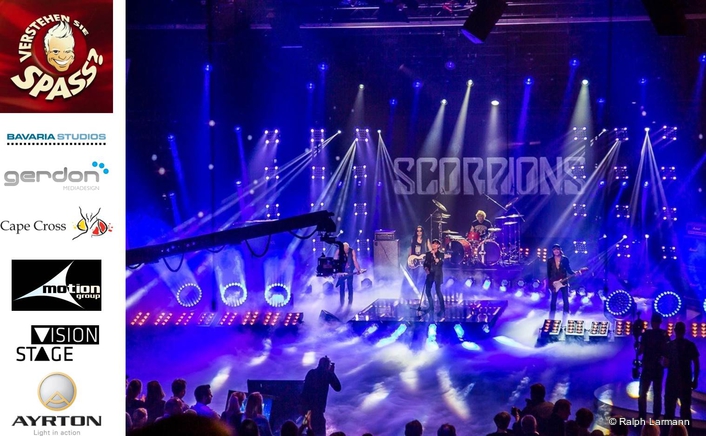 For The Scorpions set, Gerdon mounted the MagicPanel-R fixtures on truss towers behind the band to form a 4-panel high by 6-panel wide matrix. These he used for both effect and scenic lighting, and also as a video surface, pixel-mapping and bitmapping the matrix to run video content across it. Gerdon also used MagicPanel-R’s pan and tilt functions to animate the backdrop, adding movement for a further dimension of interest. 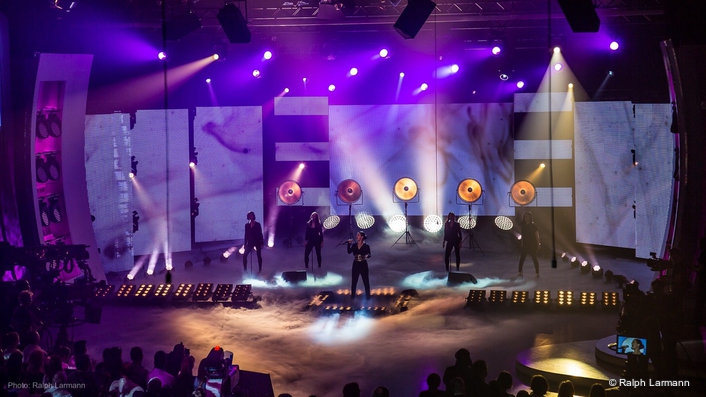 A riser composed of 24 Ayrton IntelliPix-R floorpanels was constructed for the lead singer to light him from below, while the MagicPanel-R matrix provided dramatic backlighting, focussing him in a pool of back- and floor-light both at the opening of the set and during the intro and outro of the songs. The IntelliPix-R floor was controlled as an extension of the pixel screen created by the MagicPanel-R units, mapped in one universal output. Six Ayrton NandoBeam-S3 units were embedded in the downstage edge of the riser where Gerdon used them for effect lighting through the low-lying fog onstage and into the audience.

Twenty-four more NandoBeam-S3 moving heads were floor-mounted in a moveable semi-circle upstage of the band for floor level lighting.

Six of Ayrton’s giant MagicRing-R9 fixtures were positioned on the front edge of the show stage and used to project big powerful beams of immense diameter, shooting flare effects into the steady cam and crane cam, and providing deep moody effects during the band’s slower, dark numbers. “I didn’t include the MagicRings in the pixel mapping but I did use most of their on-board macros,” says Gerdon. “The on-board effects are of a great quality so I use a lot of them by default.”

For Ann Sophie’s set, Gerdon chose to avoid theatrical or scenic lighting took a more minimalist approach. The NandoBeam-S3 units were moved to positions on the left and right hand edges of the showfloor, 12 per side, and used partly for side-lighting and floor lighting effects, but mainly for mid-air beam effects. Five custom-built halogen lighting fixtures were backed by the six MagicRing-R9 units which provided a strong blue backlight in support of the golden circles of halogen: “The contrast looked great behind the singer in the close up camera shots,” says Gerdon.

Finally, Marc Marshall’s ’50s-style swing set called for a complete change in atmosphere: Gerdon created a backdrop by using the MagicPanel wall as one big matrix which delivered a swirling, twinkling effect in a warm white hue between two video walls inset with conventional bulbs. The same video content was streamed across all the fixtures.

“Pixel mapping uses a lot of channels but the Ayrton software and channel set are very user-friendly which makes it easy to handle this quantity,” says Gerdon. “The separation is very nice on the MagicPanel, MagicRing and IntelliPix fixtures which makes the switch from video server to pixel mapping very quick. This makes our setup time very fast so I have more time to spend on the important creative work.” 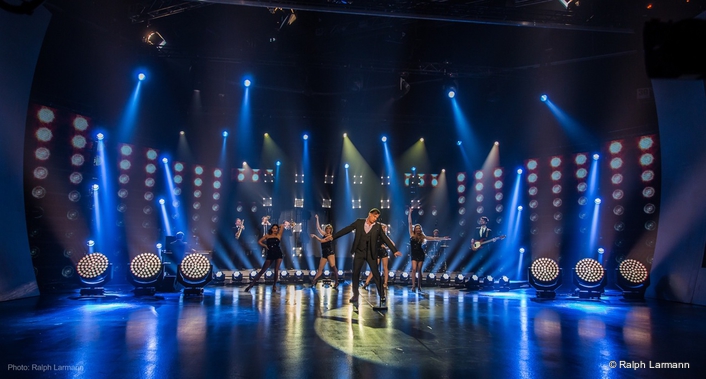 To ‘close’ the picture Gerdon used MagicRing-R9 units positioned at the front of the stage and Nandobeam-S3 fixtures at floor level providing good covering for the cameras.

“In my view the Ayrton fixtures are astonishingly high quality,’ concludes Gerdon. “They are smooth in both slow and fast moves and have outstanding colour mixing – which is often not the case for LED sources – and this is especially important for television lighting.”

The Technical Contractor for Verstehen Sie Spass was Cologne-based company, Cape Cross, with equipment provided by Motion Group from Fürth.

Ayrton is exclusively distributed by VisionStage in Germany and Austria and Gerdon comments: “Michael Althaus and his team at VisionStage have been as supportive and ever-present as always. They know the market, the designers’ needs and are very project-orientated. They always get the job done. I like that!”