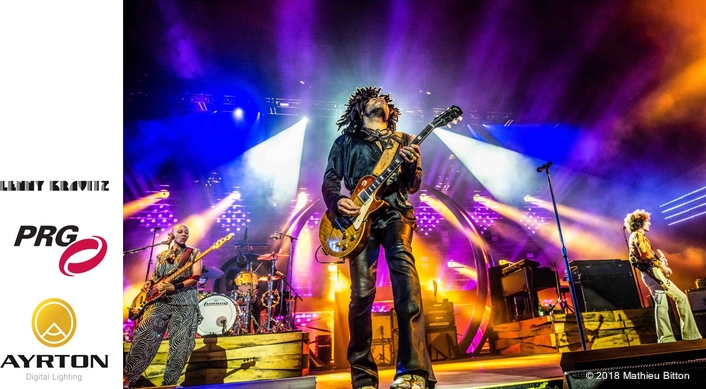 The Lenny Kravitz 2018 Raise Vibration tour, in support of his new album of the same name, kicked off earlier this year in Mexico City. The long-awaited tour from singer, songwriter, producer, multi-instrumentalist and actor, and all -round talented rock and soul singer, has created a lot of excitement around the world. The stage show is a large and lively affair with lighting designer, Leroy Bennett, incorporating 224 of Ayrton’s MagicDot™-XT fixtures into his multi-layered design.

The main set changes at different venues, but the backdrop setting and lighting design stays the same and consists of fourteen diamond-shaped pods with 16 MagicDot-XT fixtures tightly packed into each one, with just a 250mm offset between each fixture within each matrix. The pods are rigged in two rows of 7 and partially concealed behind a massive louvre blind back wall.

Bennett, who was keen to use the MagicDot-XT fixtures for this particular lighting design, explained, “the idea for the design was based on Lenny’s being inspired by the venetian blinds set I designed for Prince’s Controversy Tour. I have been using the MagicDot-XT for quite a while and like their reliability and versatility. They are small and quick and I like their continual pan and tilt feature the best. We were able to get multiple looks from them including using them in a cluster to emulate a large lighting fixture. I think that was my favourite use of the light here, to create a large beam.” 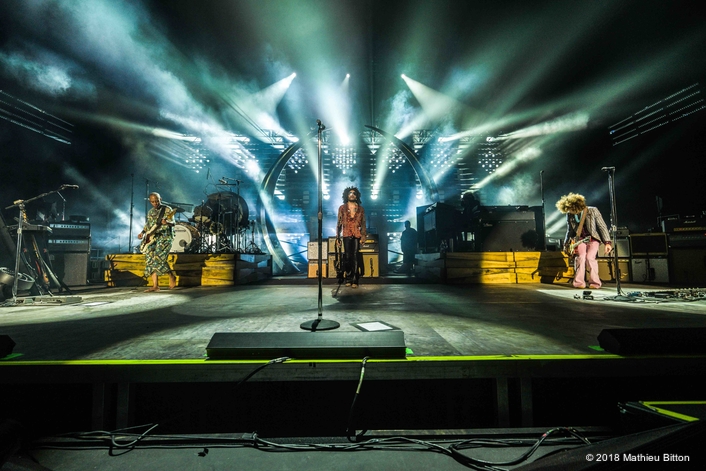 Throughout the shows, which are mostly held in large arenas, the MagicDot-XT fixtures have demonstrated their incredibly versatility. At times they can be seen twinkling through the louvre slats, refracting the light to create a tender mood or, when used with full-on intensity, drenching the louvres with saturated colour. MagicDot-XT’s high output and 2° beam can be used to create different patterns in light, with Bennett making the most out of the diamond formation in particular which is used to fabulous effect: sometimes it appears as a single solitary shape, or with several of them featured across the pods to resemble windows in a cathedral, with luminous shafts of sunlight beaming down onto the stage and performers. The fixtures are also used individually, sometimes partially obscured as a large light source behind the louvre slats, creating different a different mood for every song.

“The MagicDots were the main effect lights of the rig,” confirms Bennett’s lighting associate and programmer, Harry Forster, “partly due to the design and partly due to the versatility of the product. And, as always, Roy’s design was so versatile, that throughout programming the 20 or so songs, we managed to get a different look out of the MagicDot-XT every time.”

Forster explained why they wanted Ayrton MagicDot-XT for the tour: “We chose these particular fixtures because of their compactness which made them the best fit to assemble into the pods. We liked that everything you need from it is in the right place. It’s surprising how many fixtures have one or two annoying quirks about how the channels are mapped, or controlled, (in this case by a Grandma2) – we didn’t have any of those issues.” 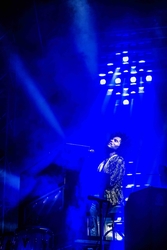 MagicDot-XT sports all the same features as the original MagicDot-R, including ultra rapid movement and continuous, unlimited rotation on pan and tilt, but with larger optics and a narrower 2° beam. The compact footprint permits multiple fixtures to be installed with a minimum amount of space between them, while its ultra-tight, fat beam is impressive over distances and can generate the sharpest of light curtain effects. The fixtures were supplied by PRG for the global tour.

The tour which included the UK and mainland Europe continued to the US taking in Atlanta, Louisville, Washington, New York, Broomfield, and San Francisco in October and Las Vegas, before finishing up in Los Angeles.  A further European leg is planned for early summer 2019. It seems that not only vibrations have been raised by this outstanding tour, with Kravitz having already sold over 12,000 traditional albums so far.