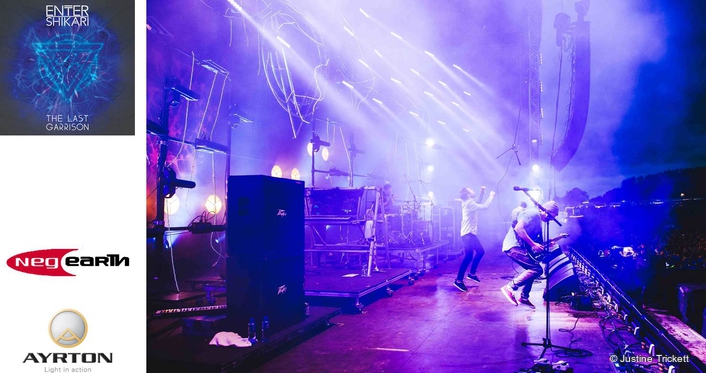 Lighting Designer, Steve Bewley, is the first to tour the UK and Europe with Ayrton MagicBlade™-R fixtures, using over 100 units for British rock-band, Enter Shikari, in support of their new album, The Mindsweep.

Bewley has truss-mounted eighty-four MagicBlade™-R fixtures behind the band in a curved wall which splits horizontally to adapt his design to fit any size of venue.

“My initial concept was to create a kind of ‘fence’ housing an LED framework in emulation of a brain and the neuropaths within it to emphasise the idea of The Mindsweep,” says Bewley. “The LED strip needed more to bring it to life, so I supplemented it with MagicBlades which have really made it zing!” 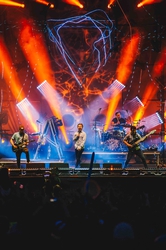 Ayrton’s MagicBlade™-R is a unique fixture which aligns seven individually controllable 15W RGBW LED emitters, each with a tight 4.5° beam, and provides continuous double rotation on the pan and tilt axes.

“For the first part of the year we used around 44 MagicBlades on a 3.8m high rolling framework which fitted the UK Academy venues,” says Bewley. “It’s like a floor package on steroids!

“We then added another 40 units on a flown truss to double the ‘fence’ to a height of 8m for this summer’s larger UK and European festivals like Download, Glastonbury and Rock Werchter.”

Bewley chose to use the pan/tilt and continuous pan/tilt features of MagicBlade-R fixtures copiously in his design, supplemented by a variety of static looks: “I opted to use the MagicBlades in many visually interesting positions and patterns, and employed the dimmer chase to emulate the music. The combination of MagicBlade’s movement, colour, on-board macros and desk effects mean I can create something truly different, weird and unique that people haven’t seen before. That is exactly what I want to discover in a new fixture.”

Twenty-four more MagicBlade-R units line the stage’s downstage edge to form a wall of light ‘like one big MagicBlade’ between the band and the audience.

“This groundrow acts like a huge curtain of light in the ambient haze and I use it to create big looks across the front,” says Bewley. “The band plays with this, sticking their heads through the curtain of light, interacting with the crowd and with the light itself.”

Bewley programmed the show using different layers and groups of MagicBlade-R fixtures. “We now have two or three different shows programmed to suit different sized venues. We use MagicBlade’s RDM function to automatically address everything during set up which is fantastically time-saving time, and have a show which is fast and easy to adapt wherever we go.”

Bewley discovered MagicBlade-R through Ayrton’s UK distributor, Ambersphere, which kept him up to date with new product developments. “I’ve been watching Ayrton closely – they’ve produced a lot of excellent products - and as soon as I saw the MagicBlade-R I knew I wanted to use it for Enter Shikari. The fixture really suits the band: Enter Shikari’s music is fast-paced with constantly high levels of energy. The MagicBlade is more than capable of keeping up with this in terms of LED, colours, speed of movement, and the continuous pan and tilt. Everything about it is really quick and does just what I hoped and needed it to do. I love the way I can create totally different looks with the MagicBlades – there is nothing else like it out there.” 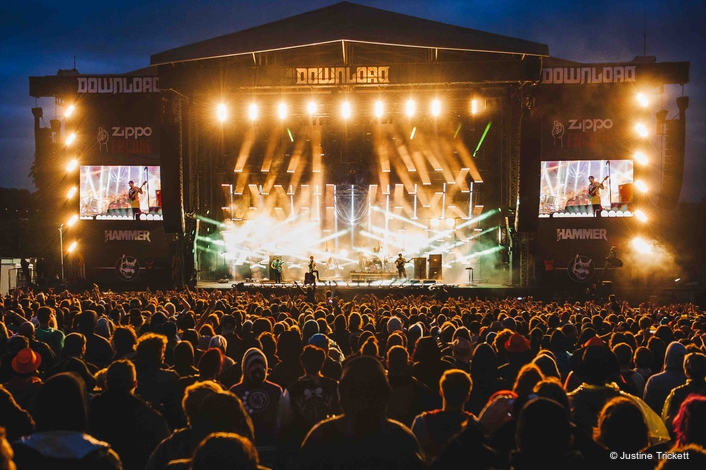 The MagicBlade-R fixtures are proving well up to the demands placed on them by the 40+ date tour. “These units are bulletproof!” says Bewley. “We give them a good bashing every night: they are the main workhorses of the rig and are worked hard from load in, through rehearsal and on into the show, before being de-rigged and transported to another venue to do it all again. They just take it all. They are great fixtures – really solid and reliable.”

Ayrton’s MagicBlade-R fixtures were supplied by for the UK and European tour by Neg Earth.