Mitchell Schellenger from Station Six, LLC was delighted to get the call asking if he’d create a production design for U.S. based electronic rockers AWOLNATION on their recent tour … since it was one of the bands for which he’s always had a few ideas in his head!

Mitchell started the design process by establishing some budget figures with management and then chatted with lead singer Aaron Bruno who is integrally involved in the whole stage presentation. They talked about his inspirations for the music among other things and bounced a few ideas around which kept returning to a water theme.

They based their final ideas on a nautical theme, so the stage set up started with the riser layout and the drum riser in the center at 45 degrees, resembling the bow of a ship. Mitchell then lined this with the CycFX 4s so he could create waves of light that could sweep across the set.

Mitchell likes using linear fixtures and creating sheets of light, which is one of his trademarks. “The zoom capabilities of the CycFX 4 helped produced the ‘low glow’ effect I wanted as well as the “very cool” waves of light.”

When Mitchell and Aaron were discussing ideas like porthole window effects, circles and colors, Mitchell immediately thought of the PATT 2013s. He knew they would bring a “perfect warmth” that would cut through the largely cold basic palette of the show.

As soon as Aaron saw some product photos, he immediately fell in love with the PATT 2013!

During the show, the PATTs are held back and used as feature lights for significant moments in the set to make additional impact. 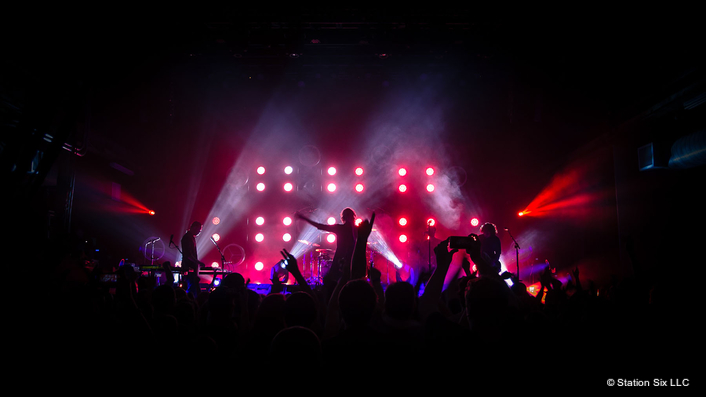 When AWOLNATION first saw the set in production rehearsals – Mitchell always has a look on stage to show off the rig before he walks a band in to see their set for the first time – and the PATTs were then turned on to show them off properly, the band literally lit up with excitement!

Wanting to keep rigging minimal and practical for the tour, but with as many different looks as possible, he knew he needed a ‘hybrid’ fixture, and the Pointe was perfect with its small size and massive brightness. It was THE fixture he needed to give the band a great looking and constantly changing show.

In terms of ambience, Aaron’s instructions were to make it feel like early morning or late evening on the water … when you don’t know if you might encounter a beautiful mermaid or an evil pirate!

Mitchell matched this vibe with a wide dynamic range to capture the spirit of the gentle and subtle songs right through to the heavy hitters. Staying with the ocean theme, he experimented with a lot of colors and color mixes to bring a watery signature feel to the stage.

The biggest challenge in creating the design as a whole was to ensure that it would work with the great variation in stage sizes and spaces on the itinerary! They played a combination of sheds, theatres, clubs and festivals, so a rig that would scale up and down and still give all the drama and impact needed was the goal.

He decided on different height vertical truss towers which allowed the rig to be expanded both horizontally and vertically. 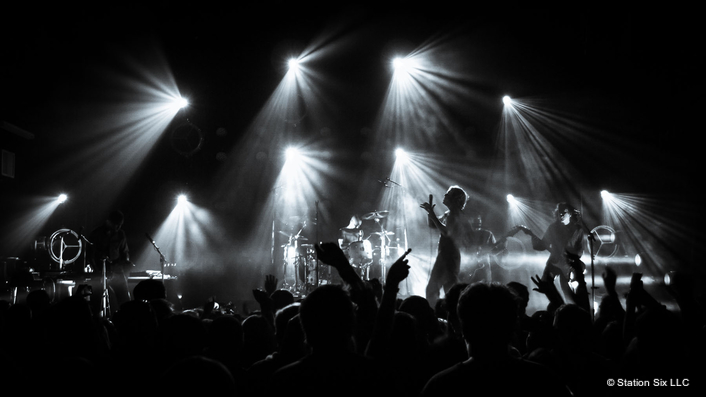 This was his first time specifying Robe products as the primary fixtures on the rig. “I was incredibly pleased with the looks I could create and I could get numerous effects out of all these very different fixtures, all from the same manufacturer, which was great.”

He thinks Robe has become a major player in premium lighting manufacturer. “They have always made great fixtures, but with the newest ones like the incredible BMFL range, I think we will be seeing Robe on most major tours and rigs this year. I’m looking forward to specifying Robe for another of my shows very soon.”

Running AWOLNATION’s lighting on the road was lighting director Andy May who worked with LMG’s lighting technician Chris Hill. The production manager was Bob Strakele and the tour manager Dan McKay.

Jimmy Russo, LMG account executive commented, "When Mitchell and I got together to discuss this tour, it was very apparent that ease of set up, big punch in a small package and over all artistic look were all very important to him. This made it really easy to work with the Robe products. Using the PATT 2013s as the anchor of the design, the CycFXs lined the drums, while the MMX Washbeam provided a huge range of features. It looked really good yet took up such a small amount of truck space.”

Mitchell Schellenger and his design company, Station Six Creative Productions, is based in Denver – although many know Mitchell via his portfolio website which has the fantastic URL of: ilikeLights.com!

His professional career has a multi-skilled base, starting work as a stagehand while still at school, then becoming a touring lighting tech and then graduating to programming. For the last couple of years he’s toured constantly as an LD and programmer for some incredible designers as well as creating shows for his own design clients. He almost exclusively works in the world of concert touring with the occasional foray into theatre, TV, and corporates.

He loves any opportunity to be imaginative and to explore new ideas.