Away From The World 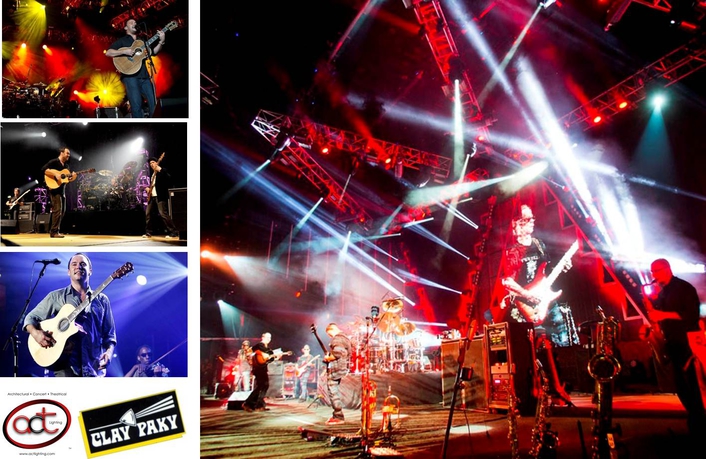 Clay Paky Sharpys Hit the Road with Dave Matthews Band
After taking last summer off, the Dave Matthews Band is back on the road with a North American tour previewing their upcoming album, “Away From The World”.  The tour features 16 Clay Paky Sharpy fixtures specified by the band’s longtime lighting designer Fenton Williams and supplied by Theatrical Media Services Inc. of Omaha, Nebraska.

“Sharpys are quite new to the market so the units we have were all purchased brand new for this tour,” says Pete Franks of Theatrical Media Services, who serves as system crew chief on the road.  “Everybody really likes the unique look of the Sharpys.  They are evenly distributed and mounted vertically on the video screen surrounds upstage of the band – part of the scenic elements instead of hung on a conventional horizontal truss.  They replaced all of the ACL-type lights we used in the past.”

Franks says the complement of Sharpys is holding up well on the busy tour schedule.  “They are rock solid and working great,” he reports.  “The guys really like the narrow beam angle the Sharpys produce.”

Francesco Romagnoli, Clay Paky Area Manager for North and Latin America, adds, “Yet another summer rock and roll tour that the our Sharpys have helped define the look for.  It’s gratifying to see so many great lighting designers and lighting professionals as excited as they are about our little light.”