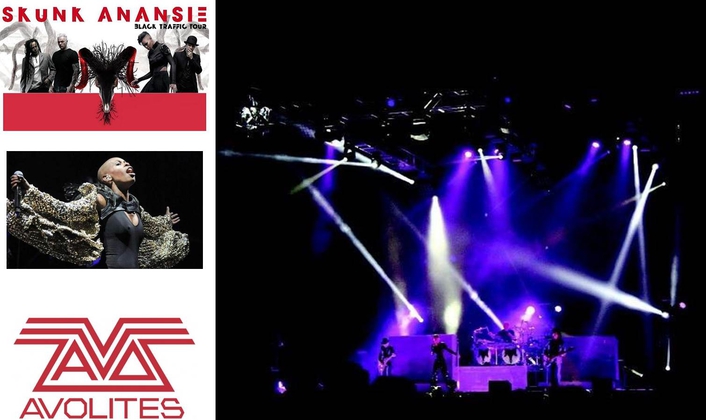 Titan it is the operating system across the Avolites range. LD Andy Smyth can run the show on a Sapphire as on a Titan
Avolites' powerful yet compact Titan Mobile console will be working alongside the uber-creative, incredibly versatile Ai Media Server for the first time on the latest Skunk Anansie European festival tour this summer.  Video-heavy, it's a visual feast of light, colour and movement backed up with epic rock show lighting. This has seen LD Andy 'Foxy' Smyth harnessing the power of Titan 7 in its most concentrated form.

Smyth has been working with Skunk Anansie since the beginning of summer 2011 and has used an Avolites Pearl Expert control console for the venues tour for the last two years. He describes the desk as 'incredible' following its boost from the new Titan Software.

"The Pearl control surface has been a favourite of mine since I started in the industry, so it was an easy choice to make for the tour. The Expert additions, such as the extra five playback faders, split roller page and fixture exchange to name but three, dramatically improve an already extremely user-friendly console. With the addition of Titan software, it really has stepped up a few gears. It's now an incredibly powerful console and things are continuously improving, with regular, really helpful, software updates."

Smyth explains that the design concept for the Skunk Anansie tour is a cocktail of epic rock show combined with an ambitious array of video projections, each of which is created to complement it's own particular track. These combine with carefully chosen colours, such as warm reds, pinks and ambers. Projection is balanced by a moving truss, which provides additional lighting when the video projection is not in use.

"I knew the Pearl Expert would have more than enough power to run the show and I've had no problem whatsoever," he says. "We had very little pre-production time for last year's tour so it was a busy first day. It was an entirely new show with many new songs. The band like to be heavily involved in the look of the show so there was a lot of work done in a very short time. This is where the Expert really shone. Having up to 60 playbacks per page, meant I could programme without worrying about running out of faders! The first couple of shows were run on the fly, with song pages being built as they happened. With 60 playbacks, as well as the 20 on the master faders, accessible at any one time, I could grab a cue and move it down to my show pages or simply run it from the presets fader banks when needed."

However in June Smyth will shift gear to a festivals tour and to make things easier he will move to the Titan Mobile.

"I really like the fact that Titan has become the operating system across the entire Avolites range. I can now run the same show on a Sapphire touch as I can on a Titan Mobile. I felt the Titan Mobile was the only realistic option given that we're doing a combination of bus / truck and fly-in shows.

"My setup at F.O.H. this summer is simply the Titan Mobile system and an Avolites Media laptop and dongle. This will ensure easier festival touring without sacrificing any of the functionality. The Ai will be powering all the video content, which is run from the Titan Mobile via artnet. The screens will surround the backline, some panels in front of the amps, drum riser, etc, so there won't be a simple straight screen. The video will then be mapped onto our screens using the Ai pixel-mapping feature.

"The show is already programmed and I can now carry the console on the plane wherever I go. All I have to do is a fixture exchange and patch when we arrive on site and my show will always be ready to go. It's going to be my first time touring with the Avolites Media system and it promises to be an exciting summer!"

Skunk Anansie will tours some of Europe's biggest festivals kicking off in June at Switzerland's Caribana Festival, and then touring to events including Denmark's Skive Festival, the StimMen Festival in Germany, and the Open Air Festival in Prague.