Bushell's stage lighting worked seamlessly with the multi faceted set, devised by set designer Richard Stembride, and the on-stage video content. Combined, these factors brilliantly echoed the bombastic mood of the band's art-house electronica with the mass enthusiasm of the crowd.

Nevertheless this show has been no easy ride for the creative team, which has seen them deliver a complex show design capable of fitting into every kind of venue from big US sheds, to European arenas and weekend music festivals, often with limited time and not always using the same lighting equipment. For Bushell, this is where the specification of the Avolites Sapphire Touch Console proved crucial.

"The Sapphire Touch was key to the successful realisation of Richard's concept because there were so many design considerations to take into account," he explains. "I needed a console that would allow me to recreate my design as quickly and efficiently as possible in each space. Luckily the Avolites Sapphire Touch not only manages to do what all other desks do, but it's also packaged in a much easier to access and more intuitive platform, which means I can focus on the creative side of my job rather than the number crunching aspect." 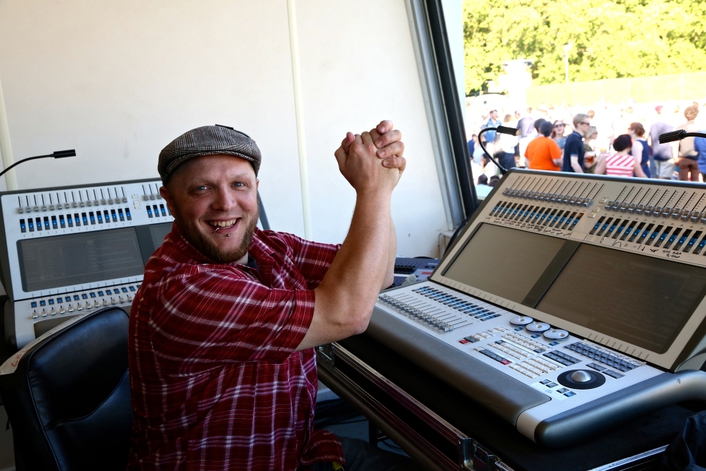 And creative it is - Bushell bounces light around the stage almost like it is a living three-dimensional object. The ceiling mirrors are used to great effect and the large selection of fixtures focused in at every angle make for a lively, rich and multi-dimensional show.

In addition, although Bushell is touring key fixtures, he also finds himself using a lot of the festival house rigs.

"Obviously as a headliner we get to bring in more of our own rig than most, however I don't put in full production by any means," Bushell continues. "For me the delight in using an Avolites Sapphire Touch console is the intuitive functionality, the dual screens and an expansive and versatile surface that gives me access to everything I could need during what can be some frenetic changeovers."

Also instrumental is the ease with which Bushell can transpose the arena show design into the festival rig, as he explains: "I can visually map the festival rig on the screen of my console and then copy, paste and clone each fixture from my own design as I like. In fast-paced environments such as festivals this is brilliant!"

Koy Neminathan, sales director for Avolites continues: "Avolites has an enormously rewarding relationship with Chris Bushell. It's great to see him using the Sapphire Touch in places such as Glastonbury, Earls Court and now British Summer Time at Hyde Park. Chris knows our consoles inside out and has always given us very helpful feedback from his experiences, at both festivals and touring venues. This feedback is a key factor when it comes to our product development and design as we value all of our lighting designers' opinions."