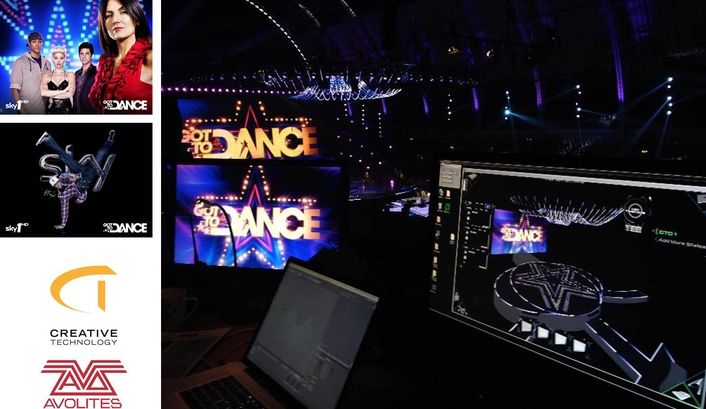 Ai is equipped to playback to video canvasses up to 8x HD1080 and this was a significant benefit to the production.
Avolites Media's industry-beating server "Ai" has been powering the fast-paced visuals for Sky TV's popular spring series of Got to Dance. A total of four Ai Server systems, running on Mac Towers, two main and two backup, were supplied to the production by video rental house Creative Technology.

Respected TV lighting and visual media programmer Russ Grubiak - who has worked on a number of high rating shows including the X Factor, Big Brother, and Friday Night with Jonathan Ross - chose to use the powerful Avolites Media Server Ai to manipulate the end visual output for Series 4 of the show, which was created to discover the best dance act in the UK.

"The Ai's built-in visualiser has been a god send, particularly in television when you are operating from a gallery or position where you can't always see the stage with your own eyes," says Grubiak. "Often, the real cameras are offering different shots to what I need to see. The Ai allows me to program entirely from the visualiser for everything, and then simply check for brightness levels from the real cameras."

Grubiak works closely with visual effects designer Julien Rigal to create content for the production, aiming to give each individual act a unique and distinctive backdrop to complement the action on stage. "Julien and I jointly decided to use the Ai Media Server. As well as being an incredibly creative content designer, Julien is also a computer genius and actually developed some of the 3D Models and wrote some FX patches for the show system."

In fact, the pair say they rely heavily on the Ai to help them achieve the desired look because every different LED product has it's own set of characteristics. "Each show also has different challenges," continues Grubiak. "Ai is great as you have the entire tool kit under the bonnet of the system. You can wire up virtually any configuration to make a creative concept work. Also, even if you are a new user or unsure on how to deliver a specific task, the support of Avolites Media's Dave Green [co-creator of Ai] and his team is always close at hand and will always offer a solution." 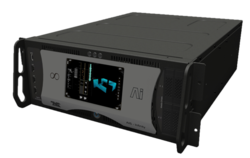 With the help of Ai, Grubiak and Rigal were able to see the entire TV studio as one giant canvas, utilising Ai's ability to scale the outputs to compensate for the varying pixel pitches of the different LED fixtures including the large screens, Barco Mi-strip dance floor and edge strip around the set. Ai is equipped to playback to video canvasses up to 8x HD1080 and this was a significant benefit to the production.

"Playing the content back across a wide canvas, using 4k files and the Ai codec has given the system a unique amount of output," says Grubiak. "The Graphical User Interface (GUI) is simple to use and now that the UV mapping can be addressed via the Ai software itself [using the Canvas Editor Feature], it has cut down time setting up the canvas - this is an invaluable new feature in the V7 software."

"Overall, Ai is a system that addresses the visuals needs of today yet has massive scope for the future," concludes Grubiak. "What can actually be delivered in software on Ai has considerably cut down on the amount of hardware onsite such as scalers, mixers, etc that many other systems require."

Steve Warren, managing director of Avolites Media comments: "It's great to see the Ai products used on such imaginative and technically challenging shows. Russ and Julien have been very enthusiastic since they first trialled the products. As well as the flexibility of working with a huge canvas, Ai runs "AiM", a unique CODEC, and projects are progressed efficiently using the powerful Salvation node based engine and Ai's project based workflow."

Series four of Got To Dance concluded with Lukas McFarlane winning the prize for his own very distinctive and emotional contemporary dance style.

Got to Dance
CT Group
Avolites