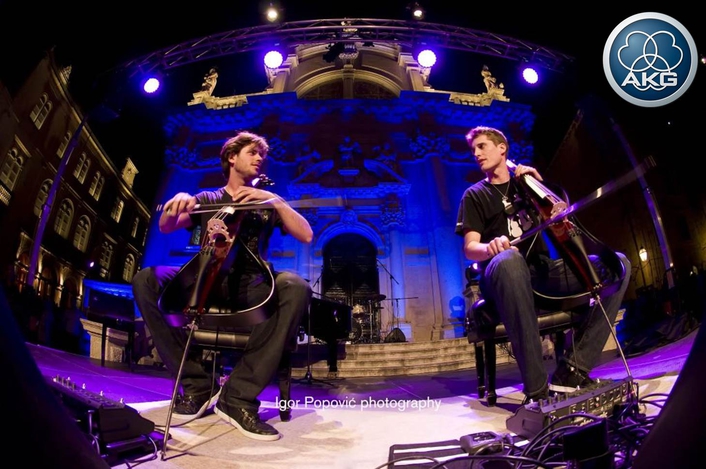 HARMAN’s AKG Mics And Monitoring For Unique Music Experience
Formerly cello rivals in the performance space, Luka Sulic and Stjepan Hauser have teamed up to create one of the most unique pop music groups to date: 2CELLOS.  Relying on HARMAN’s AKG IVM 4 In Ear Monitoring system and the world-renowned C414 XLS microphones, provided by Croatian distributor AVC, the duo delivers crowd-pleasing performances around the world.

Within a month of uploading a cover of Michael Jackson’s “Smooth Criminal”, the video had 5 million hits – making the duo one of the most successful classical/crossover artists today.  With an astonishing, yet brief history as a group, 2CELLOS has performed with greats such as Sir Elton John and George Michael and made appearances on TV shows around the globe – The Ellen DeGeneres Show, Lopez Tonight, Fox and Friends and Stefan Raab TV Total in Germany.

“2CELLOS has come a long way in such a short time and utilizing AKG’s mics and monitoring systems, their tour and performances are as successful as their online videos,” said Reinhard Mitter of AVC.  “AKG’s classic C414 microphones provide a great, true sound that translates into any genre, including the amazing style of 2CELLOS.  Luka and Stjepan also continue to praise the supreme performance of their monitoring system, IVM 4.”

Extremely accomplished individual musicians, Sulic and Hauser both started playing cello at an early age.  Sulic has won numerous international awards and performed all over the world at renowned venues, including London’s Wigmore Hall, Amsterdam’s Concertgebouw and Vienna’s Musikverein and Konzerthaus.

Hauser has performed around the world in the majority of European countries, including for Prince Charles at Buckingham Palace and St. James’s Place, South Africa, New Zealand and throughout Asia and the United States.  He has earned 21 national and international awards.

2CELLOS self-titled, debut album, which features covers of well-known rock and pop songs, was released in the summer of 2011.  Their unique sound and international fan base has successfully landed them on Billboard’s top 200 albums at #2 on the Classical Crossover chart.

AVC prides itself on employing highly educated engineers with modern views on technology.  For more than 20 years, AVC has had an active voice in systems integration of professional audio and video, broadcast systems, lighting, multimedia presentations and networks and video surveillance.