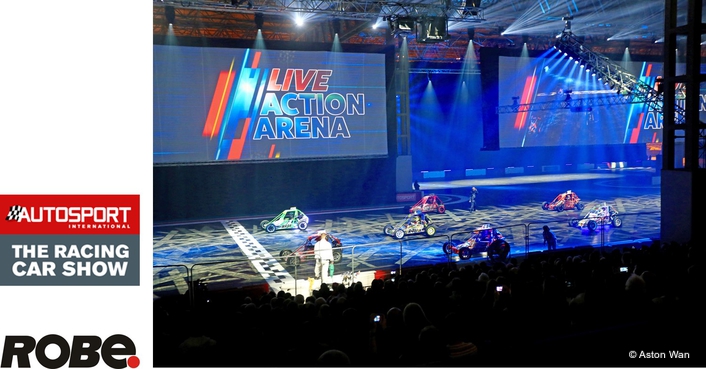 Petrolhedz and adrenaline junkies were treated to a new look for the Live Action Arena at the 2017 Autosport show staged in Hall 5 of the National Exhibition Centre (NEC) in Birmingham, UK. An audacious, eye-popping lighting design by Nathan Wan featured nearly 300 Robe moving lights to provide the power, punch and luminosity needed to match the roaring engines, burning rubber and screeching brakes of the races and performance car action!

Nathan has lit the show for the past few years working with technical consultants and equipment suppliers Network Productions. This year their technical director Nick Halliday and production manager Dave Beel were working with a new creative team who wanted to inject some turbo-charged theatricality into the tyre-slaying speed drama unfolding on the track.

When it comes to lighting, the Live Arena is notorious as a ‘lumen-killer’ – however much lighting you seem to throw into it … is voraciously consumed. But this year with the BMFLs, Nathan was able to achieve some serious high-impact lighting that’s never been seen before.

”There was absolutely no other fixture available with the power and punch to do this job,” he stated.

With cameras positioned 360 degrees all around the arena, it was essential to ramp up the lighting levels to match the excitement, and the aim was to get as much even coverage as possible around the vast space which is also the UK’s largest indoor racetrack for the duration of the show.

Last year Nathan had illuminated the track with around 250 x 1K PAR 64s … but this year these were replaced with 84 x BMFL Spots – all supplied by Network Production.

These proved a far brighter, hugely more versatile and less power-hungry solution giving Nathan multiple options for a show that was all about creating bold statements, exhilaration and keeping pace with the craziness of the racing!

A network of trusses was rigged in the roof, trimmed at 9 metres,  including four 90 metre long sections, one above the audience and three ‘stage’ left and right over the track and another two 20 metre long side trusses, all of which Nathan populated with the 84 x BMFLs.

Four of these fixtures on the audience truss were used for key lighting presenter Sky Sports TV broadcaster David Croft and his various guests. These four BMFLs replaced follow spots that had been used in previous years.

Having all this intensity at his fingertips, Nathan could highly effectively texture the whole track when needed. Using a combination of the linear prism and various gobos also enabled him to shape the light and create some way-cool high-impact asymmetrical looks. 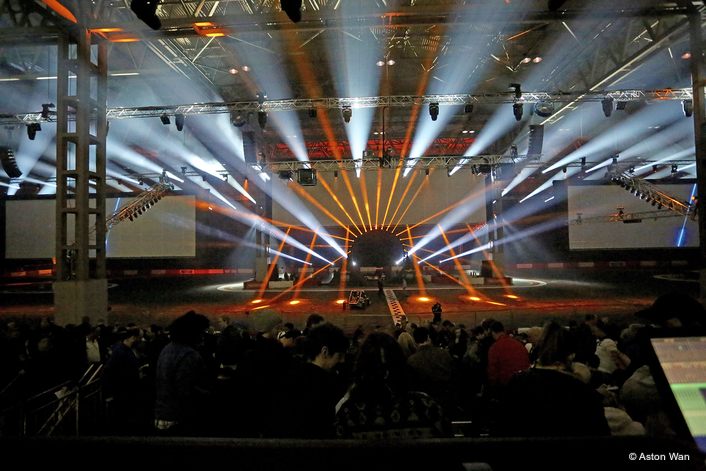 BMFLs were also used to reveal the cars once they were in position on the track at the start of the races, and also to throw interesting looks across the space for strategic moments, all enhancing the live show experience and very successful for sections like the Electric GT (EGT) Championship, the world’s first 100% zero-emissions GT championship which was a major part of the 2017 live show.

Nathan programmed these with arcing and strobing effects to the delight of the 5000 capacity crowds that packed the grandstand for up to 6 shows a day.

Another scenic gantry was built over the track at the start line which was lit with generic PARs and 90 pixel battens around the outside wall of the main track provided a layer of up and back lighting.

Thirty Robe Pointe multi-purpose fixtures were rigged around a special loop-the-loop structure for the show finale, built for stunt guru Terry Grant to perform his completely insane trick – for the first time ever with a passenger on-board – a supremely fine balance of weight and speed creating enough gravity to keep the car tyres in contact with the 8 metre high loop track!

The back-lit loop structure was first revealed from behind an LED screen … with Pointes all around it – a look for which Nathan was inspired by Pink Floyd’s iconic rings of moving lights around their famous central circular projection surface.

“The Pointe was an absolute perfect fixture for this,” declared Nathan.

As Terry’s car completed the stunt each time, a hail of pyro and lights blasted the arena for this high octane finish for a show that will be remembered.

Nathan programmed and ran the lightshow and a series of MDG Atmosphere generators from an Avolites Arena console, complete with a Tiger Touch for backup.

Apart from getting enough light into the arena to make a real difference and to be able to light the space properly for the drivers and for maximum show-effect, using the BMFLs made the space a lot cleaner than last year’s design with so many generic PARs.

The BMFLs were all lined up neatly on the same cords of their respective trusses, adding geometry and precision to the look.