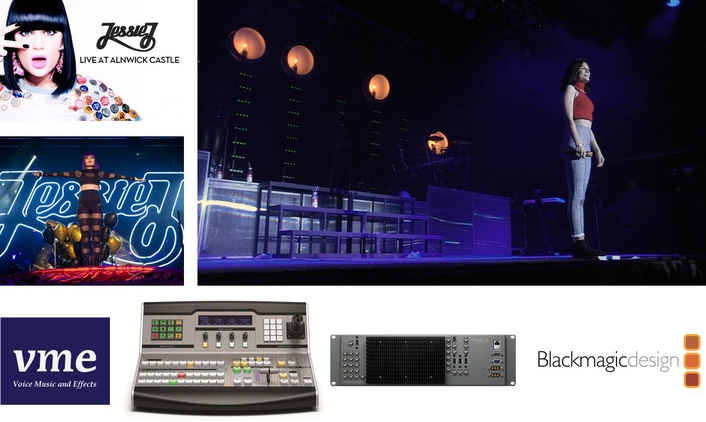 The concert was set against the dramatic and iconic backdrop of Alnwick Castle, built in AD 1096, where Jessie J performed some of her greatest hits, including “Do it Like a Dude” and “Price Tag”, to a capacity crowd of 12,500 fans.

Blackmagic Design’s ATEM 2 M/E Production Switcher and ATEM 1 M/E Broadcast Panel was used to switch between four CanonXF305 camera feeds and broadcast the performance live in HD to a 13 square meter plasma screen. At the center of the operation was Blackmagic Design’s Compact Videohub, responsible for routing all video signals and feeds to and from the nearby OB van, while a pair of SmartView Duo SDI rack mounted monitors were used for viewing the cameras video output.

Managing Director of VME, Dion Davie sets the scene of the concert, ”British weather can be unpredictable at the best of times and on this particular occasion it didn’t disappoint. It was a total washout and that can be a nightmare when managing outdoor AV installations. That said, with such a relatively small set up, it was easy enough to manage as everything was compact, and most importantly dry, inside our van. Our only real drama was having the van towed out of nine inches of mud in the early hours of the morning.”

Dion explains why a Blackmagic Design workflow was chosen: “We decided to build an OB truck that was unique and compact, as there aren’t many on the market that are built around an entirely HD workflow. It was a niche in the market, so we seized the opportunity. The decision to implement Blackmagic products was easy; the products are affordable, high quality and reliable, and Blackmagic is used by some of the biggest names in the business.”

Dion continues, “Now that we’ve tried and tested quite a few Blackmagic products, we are really excited to start implementing new ones, such as Teranex and the HyperDeck Studio Pro. We look forward to what Blackmagic does next!”

VME has more than 20 years of experience in providing solutions to international broadcasters, such as SKY News, outdoor festivals, including Wakestock, and producing sporting events, such as the Barclay’s Premiership Football 20th Year Anniversary Special in London.

AFP Broadcasts Live from Cannes with ATEM 2M/E
Broadcast Rental Installs...OS at the London Olympics
Live at the Apollo and Om... Go Live with ATEM 2 M/E