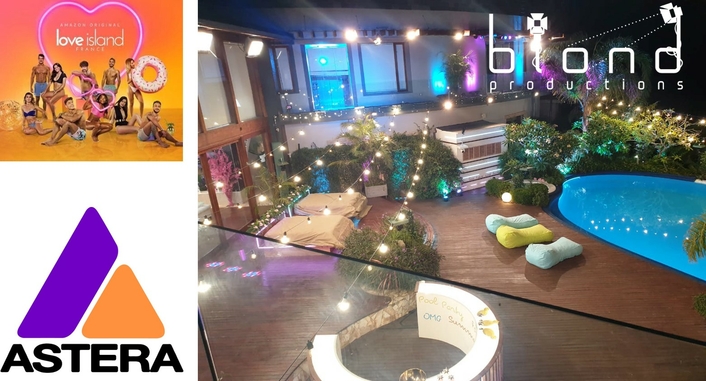 South African rental and technical production company Blond Productions invested in its first Astera products – Titan Tubes and AX3 Lightdrops – for the first series of reality dating show Love Island France. This was filmed earlier in the year at a luxury villa on the beautiful Lothian wine estate in Elgin Valley, on the banks of the Palmiet River – and with its own private lake – about an hour’s drive from Cape Town.

Paris-based director of photography (DOP) Florian Sinopoli works worldwide on various TV shows and series, and last year also lit Celebrity Love Island in South Africa for producers ITV Studios. He initially specified the Asteras, although Blond Productions’ owner Christiaan Ballot was already considering making an investment in the brand after numerous recommendations, “It was really just a question of awaiting the right moment,” he explained … “and this was it!”

The Asteras were supplied by Johannesburg-based distributor for Southern Africa, DWR, and delivered straight to site in Cape town.

Florian explained that lighting the house and the Islanders was not a straightforward task. He was looking for a very naturalistic tone and style with all the right levels and texturing to look good on camera, just as if people were in their own home environments. “It sounds like a simple thing to achieve, but believe me, it’s not!” he declared.

There were also specific areas like the swimming pool, lake and the stunning gardens that needed special lighting to ensure they looked their best on camera. In fact, around 50% of the lighting in the house was sourced from standard commercial retail outlets ... and the rest was created using conventional film and Tv lighting fixtures and treatments.

For Florian, having a wireless fixture like the Astera Titan Tubes or AX3s to hand is a “must” in this scenario.

Not only can you put lights virtually exactly where needed without the restrictions of cables, the great thing is that “the Astera batteries are properly long-life,”  he says, adding that they will go for 12-13 hours without needing a re-charge, especially when not on 100% all the time.

He also likes being able to control them from a phone or tablet using the Astera App, which is incredibly useful, and then also, when needed they can be DMX controlled via a lighting console.

All Titan series Tubes (including the half-metre Helios and the 2-metre Hyperion) have been developed to give the high CRI and TLCI required for film and TV, and Florian appreciates all the extra effects that are available like chases.

“I can use them for key light, background light, interview lighting and so on – it’s incredible how versatile a box of Titan or Helios Tubes can be.”

Florian started using Astera products around 3 years ago … and now will not light a show without them!

He spent three weeks on the Love Island France set preparing all the lighting before departing back to France to work on another show. Immediately before Love Island started, he was working on a show using around 70 Astera Titan Tubes.

Looking after lighting in the Love Island villa after Florian left were gaffer Eldridge Jacobs and Blond’s own gaffer, David Nhlanhla, who worked with a crew of four lighting technicians from Blond.

It was the first time that David had worked with any Astera products, and he commented that  they are “great fixtures to work with, perfect for background illumination, up-lighting close-ups and many more scenarios.”

They used the tiny AX3s during night shoots for highlighting plants and foliage in the background and for picking out some more detailed architectural features around the house and its outside areas.

He echoed Florian in the expediency of battery-powered lights “for positions where it’s impossible to run power of data cables,” and most of the time used his phone and the App for controlling colours and colour temperature.

As it turned out, with the sudden spread of the Coronavirus pandemic, filming had to be cut short. They managed to shoot a special finale episode just before the lockdown was imposed and wrap the series.