For the last few months, social media and the internet worldwide has been alight with The "Jerusalema" Dance Challenge – a TikTok challenge that originated in Angola and went viral after lockdown – with people sharing funny and uplifting videos of themselves dancing a series of moves often performed at African weddings to the hit song ‘Jerusalema’ by South African DJ & music producer Master KG, featuring the voice of songstress Nomcebo Zikode.

As they have generated millions of views, likes and laughs, these videos in different locations have boosted morale and spirits globally as people have also added their own costumes or elements of style and interpretation to the now-famous moves. 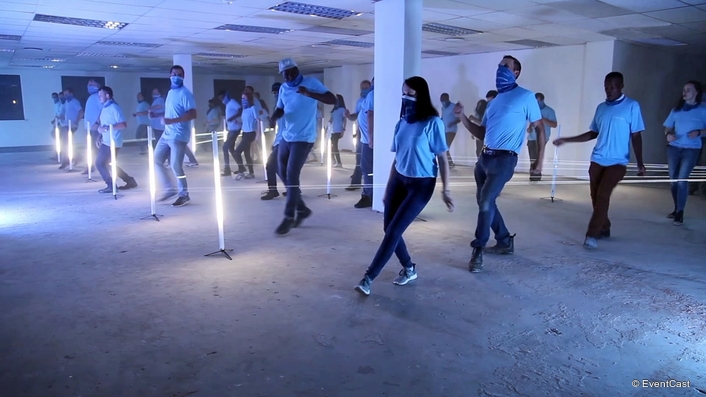 Marius van Rooyen from Pretoria, South Africa-based broadcast and streaming specialist EventCast was asked by Jaco Minnaar, CEO of their broadcast / IT partner ClearAccess, to produce a livestream / record of a Jerusalema Dance Challenge moment organised as a team-building exercise for their Johannesburg and Pretoria staff including on-site workers and contractors.

Everyone doing a Jerusalema Challenge video is looking for a quirky or different flourish to make theirs unique and stand out in a sea of viral moments ... so for the main ClearAccess video location, Marius, video director Stephan Pieterse and the team proposed getting some Astera Titan Tubes involved with the action.

The idea was that the lights could be part of the choreography, adding colour, funkiness and – with a few chases and some strobing – some additional movement to the mix. 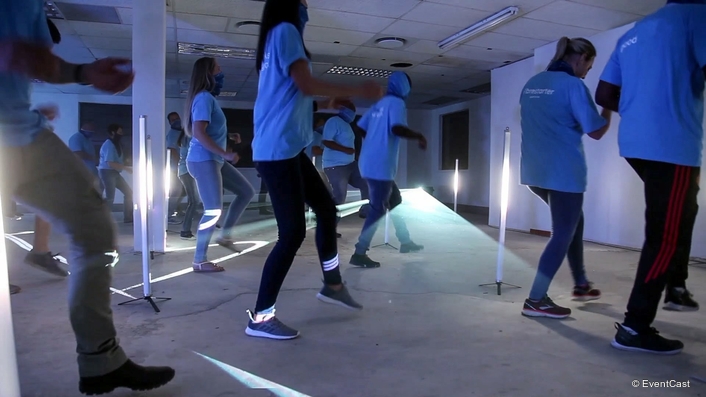 The main location was a building with a long white empty room on the same trading industrial estate as EventCast, which was the perfect space to arrange 60 distanced ClearAccess employees, and the 24 Titan Tubes – three sets of 8 – were sourced from the lighting inventory of Marius’s technical production ‘sister’ company, Millennium Productions.

He also added two 10-Watt multicolour lasers to the visual picture which were positioned on the floor at the back of the room and looked fantastic combined with the Titan Tubes. “Titan Tubes and lasers work really nicely together, producing a vibrant and dynamic fusion,” enthused Marius.

The Asteras were arranged in three rows of eight – down each side and the middle of the space – sitting on their discreet floor stands. Having them in shot immediately created additional depth to the picture. 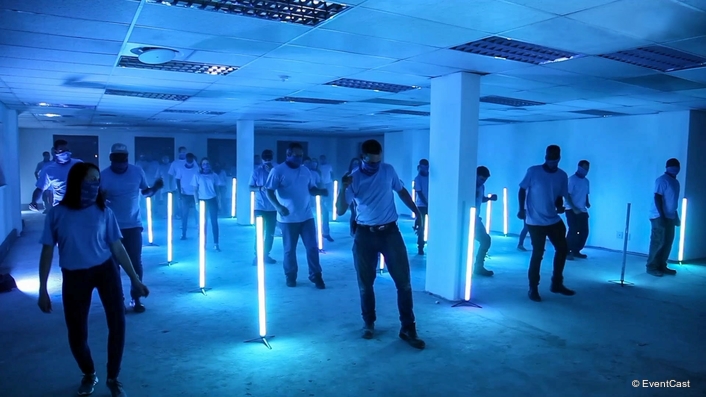 As well as colouring the room and adding effects, they were great for delineating the space, although all the dancers were also masked for extra Covid-compliance.

“Jaco Minnaar specifically wanted it to be about the staff and their experiences,” related Marius. “It was great fun and very inspirational to be involved in making a video like this.”

EventCast’s streaming division was launched at the start of the lockdown. The project was already in the planning, but the process – which includes a new streaming / recording / augmented reality studio space – was accelerated due to the pandemic as Marius and his colleagues saw the potential growth for well-produced streamed / recorded / broadcast events, which turned out to be a sharp move!

Millennium Productions has a full inventory of lighting kit including the Astera Titan Tubes.
“They were a fantastic investment,” Marius comments, in addition to being extremely quick and easy to deploy in any space or place, “they are great for effects in environments where there is no smoke or haze”.

The Asteras – purchased from South African distributor DWR – are in use constantly for their streaming projects, especially for DJ / dance / electronic music sessions where they make cool background effects.