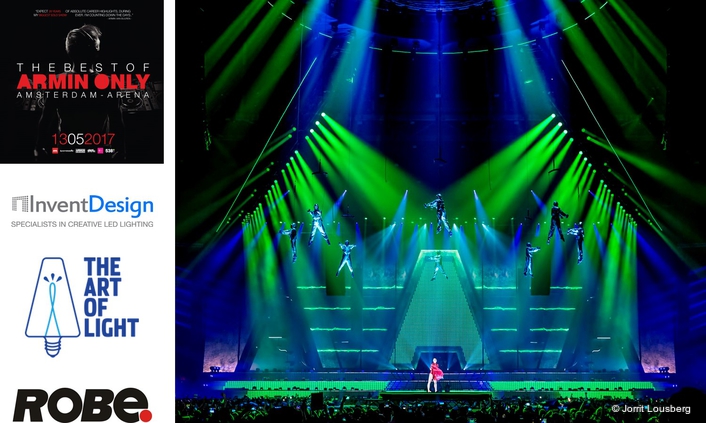 2.5 kms of DiGidot LED strip was supplied by Invent Design and controlled and mapped by The Art of Light with their Hippotizer Karst

The one, the only, the totally awesome Armin van Buuren played two tumultuous gigs at Amsterdam ArenA as ‘The Best of Armin Only’ celebrated the conclusion of the ‘Armin Only’ performance concept. Armin’s largest solo show to date in his home country of the Netherlands additionally marked 20 years of an incredible career as a DJ / creative music producer, and it was the first time a DJ has staged a solo show at the venue, also home to Ajax Football Club.

Creating an equally awesome lighting and visual design for the occasion were Andre Beekmans of The Art of Light and Marc Heinz, who united the worlds of live events, opera and drama in a visual extravaganza to match the energy and diversity of the performance.

There were over 900 Robe moving lights to help achieve their imaginative goals which were delivered by lighting contractors Focus Amsterdam B.V. and Rent-All.

The breakdown included 200 x BMFL Spots, 112 x BMFL WashBeams, 186 Pointes, 180 LEDBeam 100s and 231 Spiiders … and is one of the largest ever Robe lighting rigs for a single artist show, which was organised and promoted by ALDA Events under the technical direction of Maarten Hoogland.

As with all stadium shows, one of the first steps is to ensure there are enough lights to provide the sheer spectacle and WOW factors needed, especially for the high expectations of this show.  These 900 plus Robe fixtures were joined by around another 450 luminaires together with 2.5 miles of DiGidot LED strip. The large upstage 8mm video screen measured 60 metres wide by 18 high and comprised four sections which rotated with lights on the reverse. 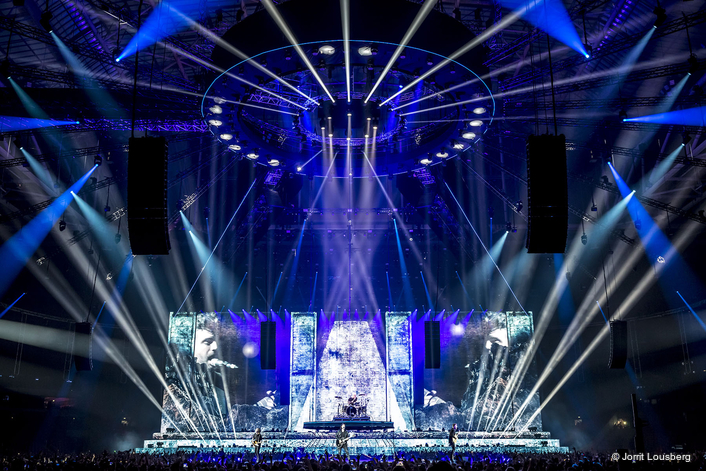 The Armin Only (AO) showcase has included four live tour extravaganzas by the artist – Imagine, Mirage, Intense and Embrace - and dates back to 2005, complete with a selection of interesting special guests producing a vibrant creative musical space encompassing numerus musical styles infused into trance including jazz, hip hop, pop and rock.

They took elements from previous AO tours - the latest being Embrace, which has just ended – with a set designed by Freek Cornelissen from 250K based on a giant ‘A’ form, with a triple level stage and a central 15 metre diameter circular truss centrepiece which was rigged above a circular ‘B’ stage below.

Various stage lifts were also incorporated into the decking and the circle had two long trussing bridges at the stage end forming the ‘A’, which were rigged with a double row of Spiiders underneath … and moved down to the stage level later in the evening. 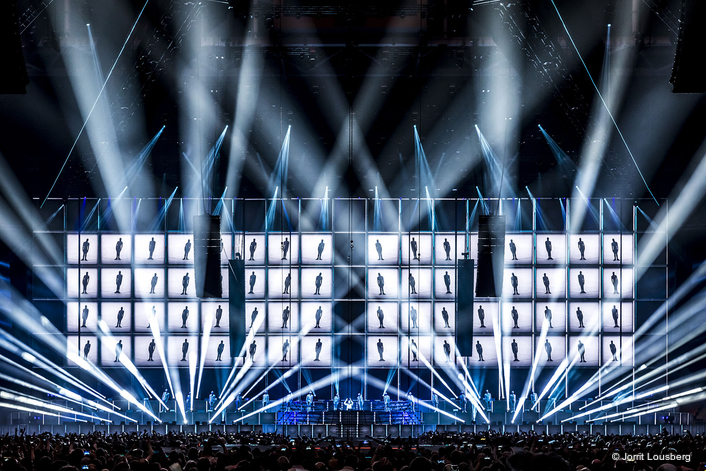 Andre and Marc have used Robe’s new Spiiders before … but not in these quantities. Before deciding on the Spiiders, they thoroughly ‘auditioned’ the fixture in a shootout with two other products … from which it emerged a clear winner.

The Spiiders outlined both the legs of the A (described above) and the O centrepiece.

They didn’t use the individual pixel mapping on the Spiiders for this gig as the focus was on making lots of big, bold, bright statements with all of the lighting, so they drew extensively on its solid high quality fat beam and superior wash capabilities.  “The spiider is a perfect wash with a narrow bright beam which works well at these heights,” stated André.

As the two moving bridges went from their ‘home’ position down towards the stage, the Spiiders produced lots of effects and excitement with the crowd going completely mental!

As an Armin Only spectacular, they knew there would be several guests plus aerial performers and dancers onstage, all of whom would need key lighting in multiple positions onstage and in the air. 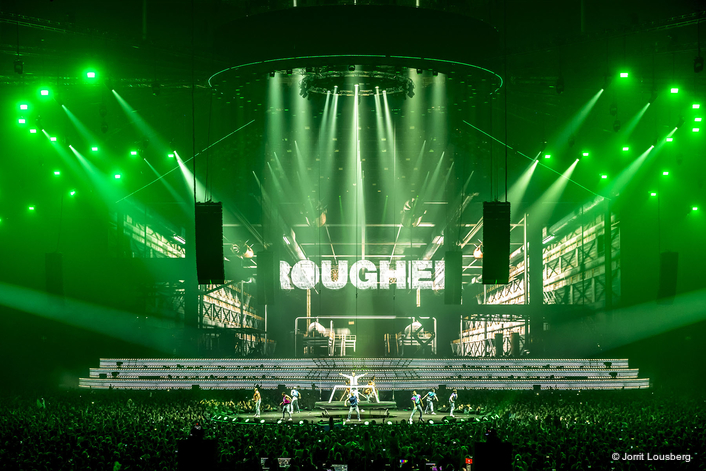 With a trim height of 20 – 24 metres across different parts of the rig, that’s why they chose the BMFLs, as the only light currently available that is powerful and bright enough to do the job efficiently.

“BMFL is the only fixture you can use at these heights and have impact,” stated Andre, “so it was an easy choice to go with the Spots”. All BMFL WashBeams were dedicated just to key lighting artists. Above the DJ booth on the main stage between the legs of the A was a big grid of LEDBeam 100s, an excellent small fixture to use en masse to fill gaps like this.

LEDWash 800s were used as down-lighters over the stage areas, while the 186 Pointes were distributed everywhere, including on a truss around the entire arena perimeter, where they were ideally placed to provide essential background and camera candy for the live RTL4 telecast on the second night. 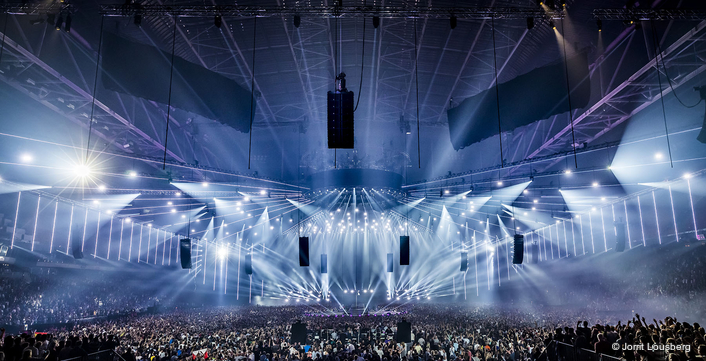 Forty-eight Pointes were used in the centre … 24 in the air around the circle (O) truss and 24 on the floor up-lighting the underside of the circle, which featured three concentric rings of lights and an access platform for the aerialists.

All lighting was controlled from two grandMA2 full size consoles (fully backed up) operated by Andre and Armin’s long time lighting operator on the road, Michael Seeverens – a mix of  timecoded and manually triggered cues for the best of all worlds.

All 2.5 kms of DiGidot LED strip was supplied by Invent Design and controlled and mapped by The Art of Light with their Hippotizer Karst.

Video was run by Carlo Ruijgers and special content was created by Eyesupply.

The challenge was creating all the epic crowd-pleasing trance and dance looks over a four hour period and balancing these with the more precise and crafted lighting required for some of the soloists and aerial pieces. This is where the synergy between Andre and Marc works so well, uniting and crossing over two different base disciplines of lighting in this highly charged ‘live’ atmosphere. 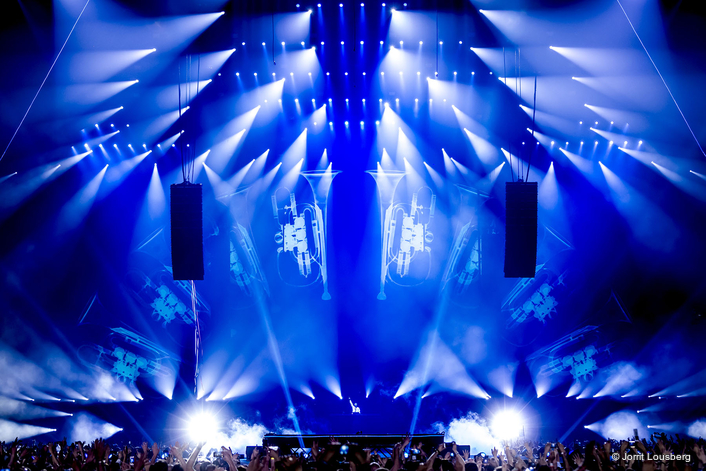 Amsterdam born-and-bred Marc really enjoyed working in the venue – packed both nights at its 35,000 capacity for dance events – which is sacred ground as he is an avid Ajax fan and has been a regular visitor since 5 years old!

Andre comments that the four hour, action-packed set simply flew by … the original Armin Only shows were known for their marathon 9 hours of pumping rhythms!

For Robe … it was a massive honour to have so many fixtures specified on such a high profile and critically acclaimed show, by one of the world’s leading dance music exponents.