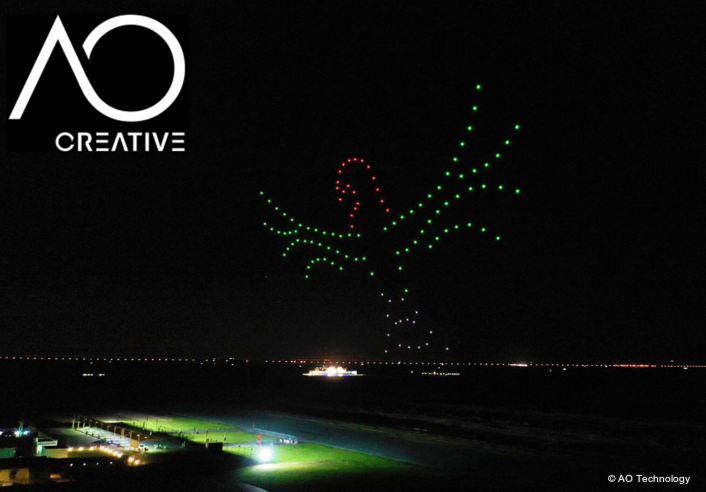 AO Drones’ mission is to enhance events with spectacularly choreographed, volumetric images in the sky.

Of course, it’s not just about the kit for the business, as Niedermeier explains. “AO Drones offers our clients full-service 3D pre-visualisation using 3D design software and 3D video rendering, plus we have a global network of trained pilots, creatives and technicians who can work with our clients to deliver mind-blowing visual designs in the sky.” 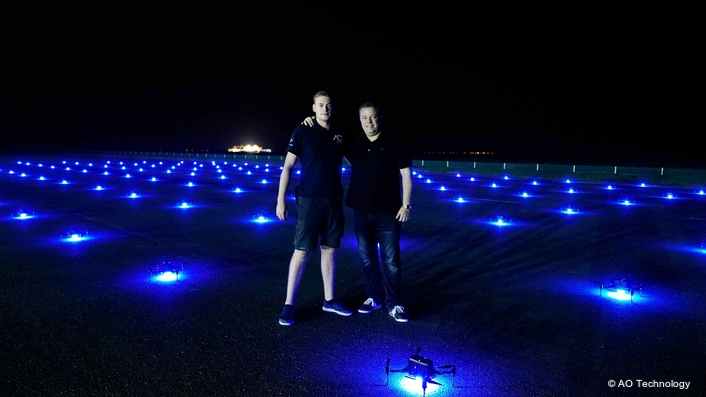 Drones, when used imaginatively, can bring a rich, dynamic layer of content to any show designer’s palette. “The fact that drones can move freely in three-dimensional space can add another layer of value and meaning to a show – the artistic possibilities are endless,” adds Niedermeier. “In addition, a drone’s ability to carry payloads including video tiles, lighting and mirrors can bestow a rich storytelling layer to both artistic and corporate endeavours. It’s a very exciting time for show design.”

Drones can be deployed individually or in small or large groups. Indeed, large numbers of drones can create stunning swarming effects and deliver vibrant volumetric patterns, which in turn can interact and respond to other elements of a production such as audio, lighting and video.

Each drone unit features high-brightness LED surfaces, offering stunning visual impact and a plethora of colours, resulting in visually captivating shows that can now be enjoyed by audiences over much longer distances.

AO Drones currently serves the Middle East region from its UAE hub and Europe from its German HQ. However, with partnerships in America, Asia and Africa, the business is able to deliver shows worldwide. 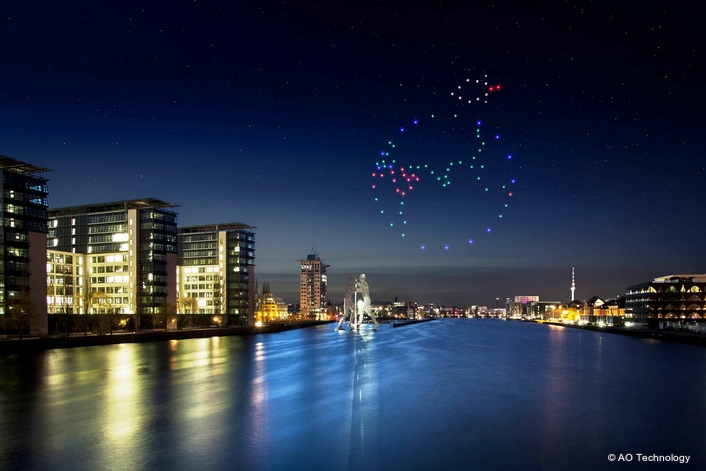 AO Drones’ mission is to enhance events with spectacularly choreographed, volumetric images in the sky.

“Our mission is to craft the very best drone entertainment experiences in the world. Harnessing ever evolving technology, AO Drones can offer flight times of up to 20 minutes, considerably more than other models in the marketplace. Our system can also achieve pinpoint accuracy of formations with up to 1cm tolerance at high speeds. AO Drones is also continuing to work with developers to ensure that the system is robust in wet weather,” states Niedermeier.

The company says the relatively low weight of each unit makes it possible to transport multiple drones in cargo easily and affordably.

In light of recent issues of drones near airports, AO Drones feature real-time monitoring during operation as standard. Its mission control software allows for the creation of geo-fenced boundaries ensuring drones remain in pre-determined operating territories throughout their flight. The company also offers comprehensive training for drone ‘pilots’.

“We believe AO Drones’ new technology heralds the start of an event design revolution,” concludes Niedermeier. “This shift will be similar to how moving lights transformed the show design industry three decades ago. Today we can go higher, faster and brighter than ever before and we can do it so much more efficiently. This is a brand new dimension in creative visual design.”

For more than twenty years, AO Technology has been providing regional and international support for even the most demanding projects in the field of architectural or events lighting: from the supply of equipment – whether sale or rental – to the elaboration of creative concepts, to the provision of full-service support in the role of general contractor. The clear division of the company guarantees customers communication backed by expertise and efficient solutions at every stage of a project. A large network of tried-and-tested partnerships is available to support your projects.