During the show spectators witnessed what happens when a person’s Facebook account is hijacked—specifically, when Simon Gosejohann and his brother Thilo commandeer someone else’s account. Due to this hostile take-over, the social network becomes an "antisocial network".

Simon and Thilo asked the volunteer Philipp to hand over the access data to his Facebook profile and thereby controlled his account for a week. Philipp was confronted with six tough tasks, which he and all his unsuspecting friends could then read about on his profile. How do friends react if a fan of the Cologne ice hockey team suddenly announces on his Facebook site that he’s going to sing the arch-rival’s fight song in front of all fans in the stadium?

And what was Philipp’s potential reward for mastering these challenges? For the first five tasks he could get 1,000 Euros each. On overcoming the sixth challenge he could double his prize up to 10,000 Euros.

Eventually, the exertions paid off for Philipp. He accomplished all six tasks and won the 10,000 Euros.

As evidence that the tasks were accomplished, and in order to capture the moment for eternity, the Gosejohann brothers uploaded the videos of the tasks to Philipp’s Facebook page.

Hans Douma, Director of Technical Production of the MMC Studios in Cologne, explains:
“On behalf of REDSEVEN Entertainment, the MMC Studios provided technical support for the different challenges of the production ‘antisocial network’. All challenges and the emotional reactions of the candidate were recorded with the help of hidden cameras: at the dance challenge, at a course for painting nudes, in a café, and at a piano concert in the city hall. 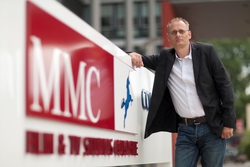 The MMC art department converted a delivery van into a mobile control room, in order to monitor and control the candidate. The van was then equipped with video, audio and lighting equipment. It was transformed into a combination of a set, an outside broadcast unit, and a command center.

In addition, every location had its own sub-control station, from which the production and editorial teams could talk to the candidate and to the presenters. Fiber optic lines were used to transfer sound and video between this additional control station and the vehicle. Despite the little time for preparation, the technical systems in the vehicle and the additional second control room were implemented to the complete satisfaction of the customer.”