Another Successful Summer Session for Adlib in Glasgow 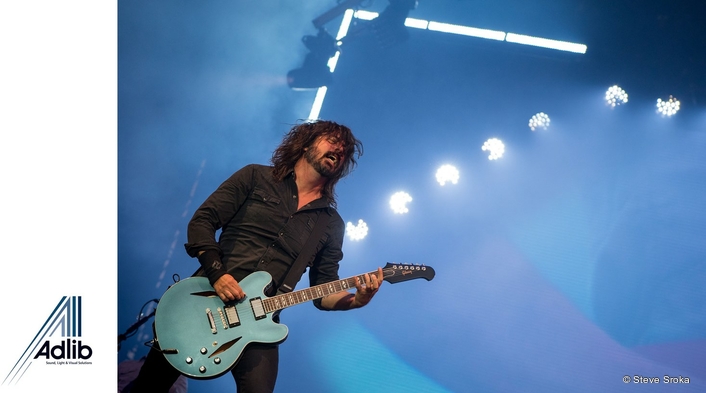 Adlib supplied full production – lighting, video including LED screens and cameras, audio and rigging – to DF Concerts for the 2019 Glasgow Summer Sessions in Bellahouston Park that featured three dynamic gigs over two consecutive weekends, attracting over 100,000 people who rocked up to see headliners The Cure, Foo Fighters and The 1975.

The project was coordinated from Glasgow’s Scottish Office by Chris Neary and Craig Hamilton who created a production visual and audio design that also facilitated each of the headliner’s own productions. 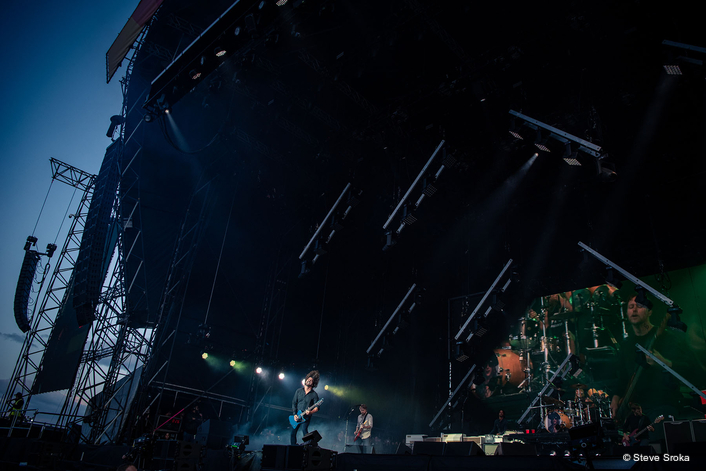 Adlib provided The Cure’s 4-truss ‘house’ rig, with both Foo Fighters and The 1975 installing their own video and lighting specials packages ‘underneath’ the house system.

Lighting & Video
Adlib’s four LX trusses and one backdrop truss were installed beneath the 22-metre wide Serious stage and roof structure which was similar to the one they had worked with for the TRNSMT Festival a few weeks earlier.

Over 70 moving lights were utilised, a combination of Martin MAC Viper Washes and Profiles and Claypaky Mythos hybrids that were great for beams and effects. These were all chosen as good, reliable workhorse fixtures. 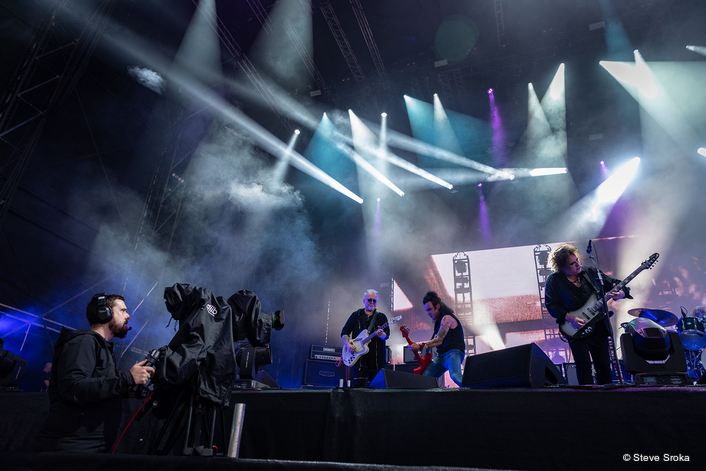 Adlib’s Tom Edwards on camera duty during The Cure live

Twenty GLP Lighting JDC-1 LED strobes added plenty of power and punch, spread out across all four trusses together with 40 x blinders, a mix of 2-lites and 4-lites, great for audience illumination and white-outs.

All the headliners brought their own onstage video elements, while Adlib supplied the left-and-right 6-metre-wide by 8-metre-high portrait IMAG screens, made up from their Unilumin Upad II H05 5.9mm product.

This ensured everyone in the large crowds had a great view and the classy portrait orientation also worked nicely with the proportions and scale of the stage. 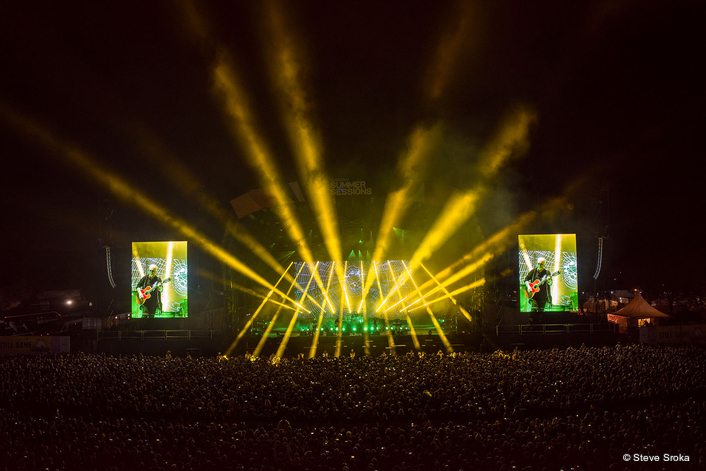 The camera package comprised three Sony HXC-100 broadcast units, one positioned at FOH with a long throw lens and two in the pit / stage area, one was usually used hand-held onstage with the other on a pedestal just in front (of the stage). Adlib also provided 4 Marshall Minicams for placement on drums, keys etc.

The IMAG camera mix was directed by Dan Ormerod using Adlib’s UHD / HD PPU with a Ross Carbonite Ultra 2 M/E switcher at the centre. This was a new investment that has provided a solid backbone and excellent continuity for several Adlib supplied events throughout the summer.

A Resolume media server was part of the setup, programmed to handle adverts, promos, interstitials and general site and public service announcements with a PowerPoint laptop on the network for emergency messaging if needed. 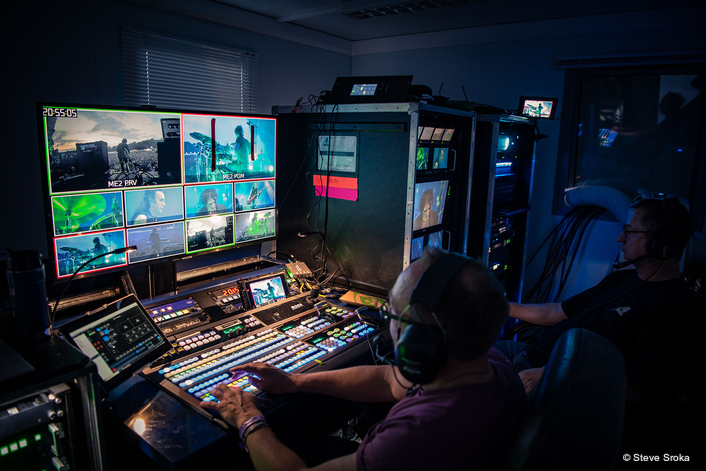 Audio
A ‘classic’ L-Acoustics system design was implemented for the event which needed good, strong, high-clarity coverage over a wide area, and this is a tried-and-tested system which meets all Adlib’s standards of excellence as well as all the headliner riders.

A mix of L-Acoustics K1, K2 made up the main and side left-and-right hangs with a combination of 24 x K1 and 24 x K2. KARA was used for all the necessary infills, outfills and lip fills.
The 36 x L-Acoustics KS28 subs were arrayed across the width of the stage for even coverage.
Four delay hangs were made up from 24 x K2 speakers.

The ‘house’ consoles were DiGiCo SD12s for both FOH and monitors – with five supplied in total including a spare system.
All of the headliner’s stage systems were self-contained, and several other bands brought in some sort of audio package, many with their own IEM systems, all of which were accommodated seamlessly by Adlib’s efficient crew. 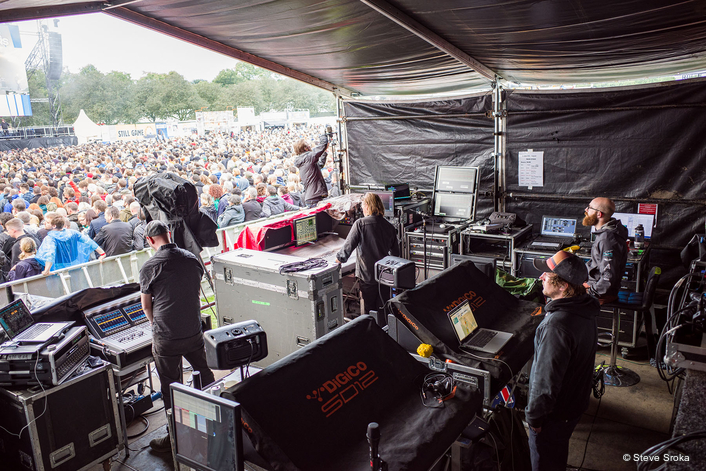 Sixteen Adlib MP5 wedges were available for those using the house monitor system.
Audio crew chief Andy Russell and project manager Craig Hamilton spent considerable time advancing everyone’s requirements, ensuring that all the details were taken care of, so when they arrived onsite, as far as possible there were no surprises!

The erratic weather was a challenge with some heavy rain in the days leading up to the first weekend, however the tarmac’d access roads helped the get-in logistics massively and nothing phased the Adlib team!
Everyone catching The 1975 on the second weekend was treated to a bout of glorious late-summer sunshine!