Die Fantastischen Vier - AKA iconic German rappers Fanta 4 - hit the road again on “Vier und Jetzt” their biennial tour campaign for 2016-17, reaching out to an ever loyal fan base which spans several generations and stretches across every corner of the country! Once again an equally fantastic lighting, set and visual design was created by Gunther Hecker working in close collaboration with Marc Lorenz.

Gunther and Marc are a well-known FOH duo recognized for their fresh, often radical, boundary-pushing ideas and different approach! Their lighting rigs frequently contain Robe fixtures and this one followed that very trend with 60 Pointes that were integral to the epic yet raw show aesthetic developed by Gunther.

Marc, from Cue Design, took on the role of lighting director plus overall visual technology and control guru, compiling and co-ordinating the lighting and video specifications according to Gunther’s wish list. The pair were joined on the creative production team by visuals / content producer Franz Schlechter and band member AndY (And.Ypsilon – Andreas Rieke) who created some of the video and programmed custom Quartz Composer patches which were integrated into the Resolume video playback system that Marc chose to run the show visuals.

Gunther and Marc have used Robe products in their work for some time and are big advocates of the brand for the flexibility and reliability it brings to show scenarios.

The 60 x Pointes were all rigged on five overhead trusses flown directly above the central section and main performance area of the epic wide-look stage design. These trusses were automated using a Cyberhoist C1 system. 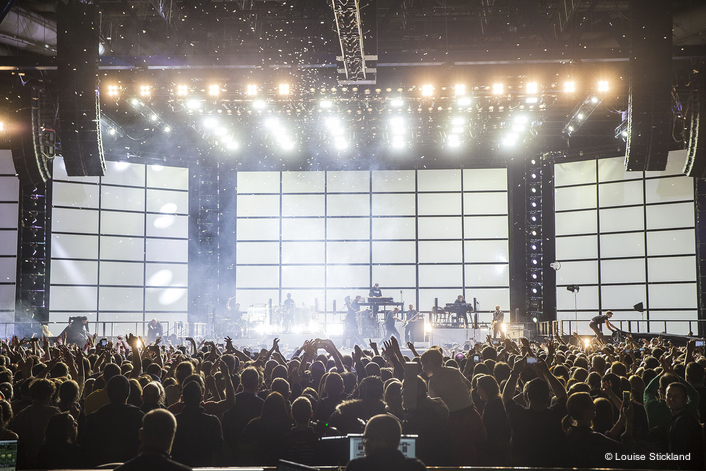 Gunther explained that he wanted to step away from a ‘traditional’ lighting composition of using wash, spot and beam lights, instead using just LED wash fixtures - to do exactly that - and then Pointes for multiple lighting special effects.

“I chose Pointes specifically as they worked so well in contrast to the washes, and that’s also why I concentrated them in one area of the rig rather than spreading them over the set”.

The intention was to create looks that didn’t feature predictable beam patterns or sequences either symmetrical or asymmetrical! Instead he built off-beat almost abstract visual impressions utilizing Pointes. These ‘pictures’ were juxtaposed with the LED wash lights and around 180 medium flood PAR cans dotted around the rig. 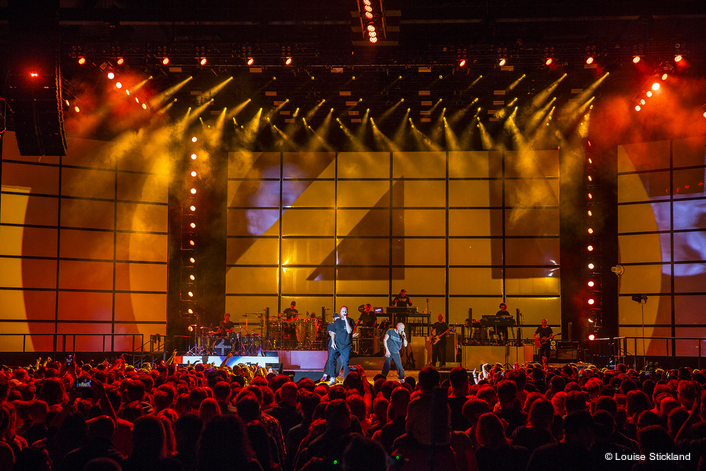 And different they certainly looked!

Sometimes the Pointes would be on a tight focus and used for fast pulsing and trippy flickering effects in conjunction with LED strobes also rigged on the same moving trusses … and at other times, they were used for super-fast pan/tilt chases … almost anything that was non-standard and that you’d not normally recognise as a Pointe look!

‘Very versatile, high output, low weight” all made Pointes ideal for this application according to Gunther. A lightweight fixture was essential to be able to optimise the speed and accuracy of the C1 system. When those trusses moved … it was super-fast!

The five moving trusses also added  theatricality to the stage and shifted the entire look and feel of the space, sometimes closing it right down in a complete antithesis of the full-on wide set looks. 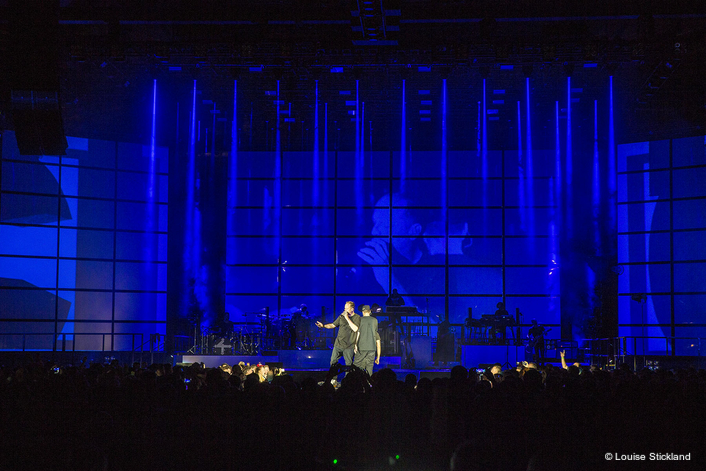 The 40 x 7m stage wings were built from five sections containing 2 x1 metre high gloss white foil projection panels.  Four sections had 21 panels and a centre section had 42 panels with 2 metre gaps between all the sections. These were inspired by a design that had worked very successfully during their outdoor summer shows. Furthermore, Gunther used Pointes to break the very clean stark picture that these panels presented.

Gunther comments, almost flippantly, that creating a show in a white gloss environment was a real challenge, but in the true spirit of experimentalism, “That’s why we chose to do it”.

Apart from the white patent being a departure, it was part of the show narrative. Like most rap music, language is important, so this was an ideal vehicle to deliver key words and text onscreen via powerful projections. This was also one of the starting points for the whole overall visual design. 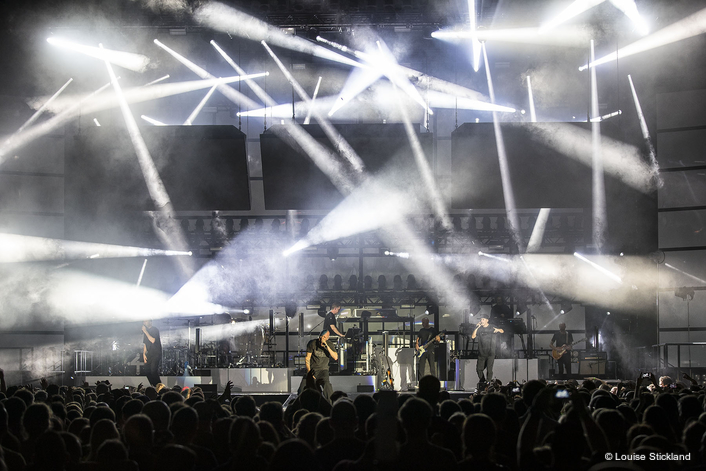 Gunther very much sees video and lighting as one creative entity, so his designs create collages full of ‘images and impressions’ with careful layering and combining of both mediums and this is very much a key part of his MO for bringing a show to life onstage with interesting and lasting memories..

The seven camera IMAG mix was directed by Simon Cimander and fed to three moving LED screens as well as treated and displayed across the projection surfaces sometimes skilfully mashed up with the playback video. The screens were also used as pure light-sources, underlining the whole concept of blending lighting and visuals.

On the road, Gunther ran the lights while Marc operated the Video-Matrixes and controls, both using Hog 4 consoles. Ingo Koenzen was the Cyberhoist operator and Franz Schlechter and Mark Langer divided up the touring media server duties between them. 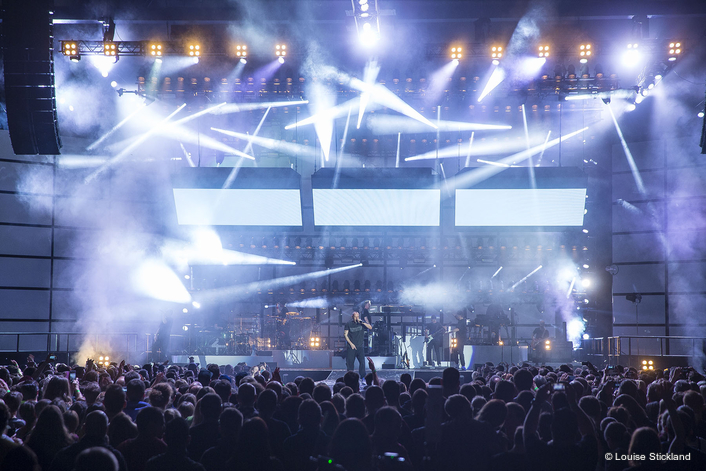 All the lighting equipment was supplied by leading German rental specialist Satis & Fy, out of their Werne facility, together with rigging, automation, stage and set. Cue Design provided the Hog 4 consoles running the lights and media servers for the playback video.

The Fanta 4 tour started just as an extremely busy autumn / winter season drew to a close for Gunther and Marc with three other show designs on the road including for violinist David Garrett and rapper Cro, both with Robe BMFLs on their rigs.