The tour’s final show in Vienna at the Wiener Stadthalle was taped in front of a live audience
Called ‘The Concert Event of 2012’ in Austria, the country’s newest superstar Andreas Gabalier is conducting his first tour of his native land. Though he’s dressed in traditional leather suede pants, plays an accordion and sings “Volksmusic,” he’s packing in crowds on his “Volksrock’n Roller Tour” 2012 with a rig full of High End Systems, a Barco company, products.

The university student in Graz, Austria, made his major-label debut in 2009 with a self-produced CD that he burned in his basement. Since then, he’s garnered numerous awards and critical acclaim.

For stage and video designer Andy Fink, the design elements centered around Gabalier’s love of traditional costume and his special leather trousers. The audiences love the look as well, with more than 85 percent of them outfitted in traditional costumes in support. So when each show opens, the first thing the audience sees onstage is Andreas Gabalier in his leather trousers and accordion, with the Volksrock 'n Roller T-shirt logo projected on the back screen. 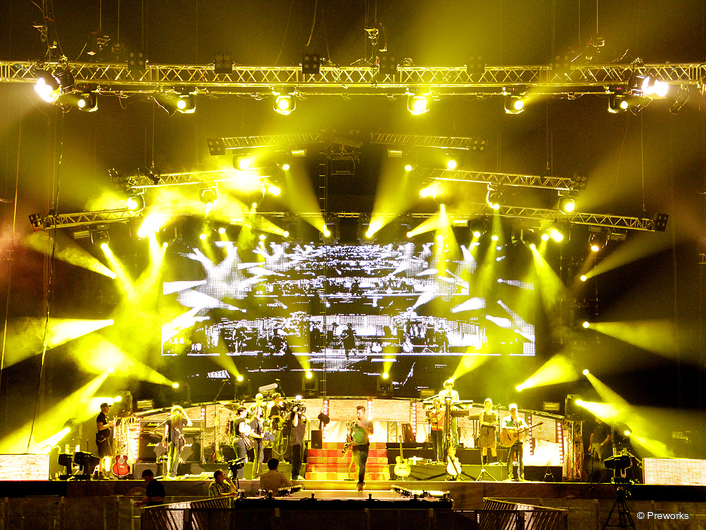 LD Mayler and designer Fink pre-programmed the whole show on Wysiwyg including video pre-programming on the two Axon Media server in Preworks’ studio. Fink used stock and custom content from Axon and its HD-SDI input for the live video stream. 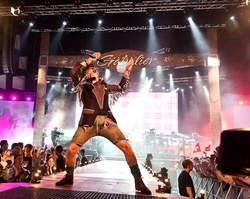 Fink says, “It’s brilliant to use the simple Axon for this show. We can play with different sources and Michael can use the Live Video stream with his Road Hog Full Boar as an upper layer.”

Describing his lighting rig, Mayler said, “It was a very nice mix between spot lights and wash lights. The Intellaspot is always the best choice for large venues. The truss for audience lights was installed in 23 meters high, which was perfect for beams and colors on the people. The Studio Beam 700 is very well known but Technospot is incredible. I know very bright spotlights in the 700 watt class and when you see the immense output of Technospot with 575 Watts - especially in colors - wow.”

A SHOWPIX fixture, along with enhancement from the FQ-100 fog generator, were installed in the round end of the catwalk to use in some songs for special uplighting of the singer and guitar player.

Mayler used the control desks in Multiserver mode and was happy with its success. The DP8000 processors were installed stage right and Hognet was broadcast via fiber optics from FOH to dimmer city.

The tour’s final show in Vienna at the Wiener Stadthalle was taped in front of a live audience for a DVD recording.  The German production company Tee-Vee recorded this show with 8 different cameras in HD quality. Director of photography, Florian Schreiter, also a longtime Wholehog user, controlled all lights for the audience and the recording on this show. 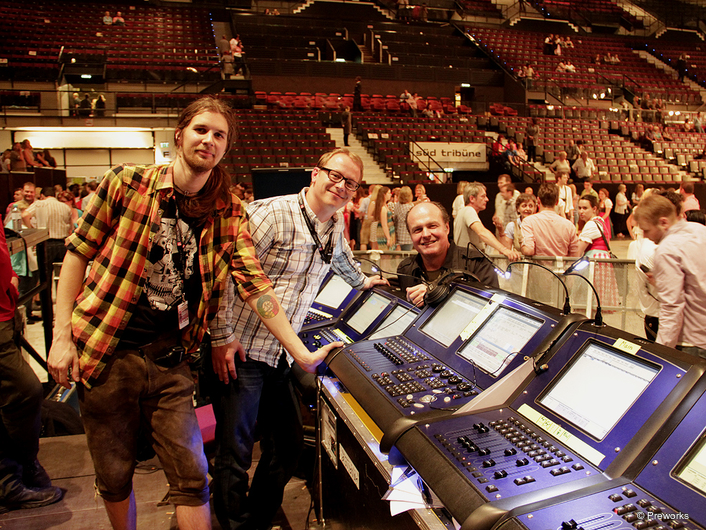 Preworks’ Andreas Reinbacher said, “It’s a pleasure for us to see High End Systems equipment light up this tour. We will continue to be a partner of Andreas Gabalier and his career, so we envision using a large amount of HES equipment in his shows again in the future.”