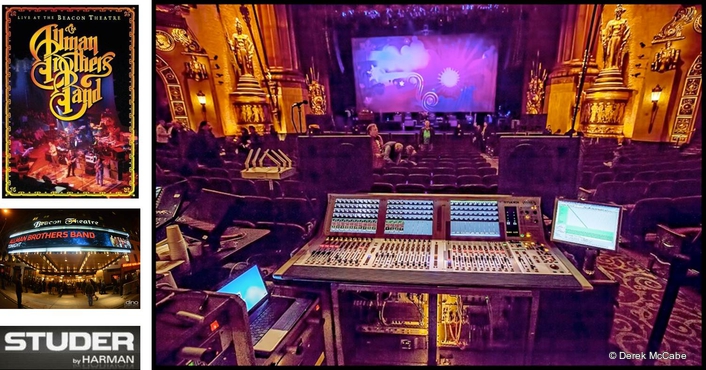 The Allman Brothers Band Continues Beacon Theatre Tradition With HARMAN Studer Vista 5 SR Digital Consoles
One of the most popular live bands in music history, The Allman Brothers Band is currently in the midst of its annual residency at the Beacon Theatre in New York City. For this year’s 11-show stretch, Lititz, Pennsylvania-based Clair Global is providing two HARMAN Studer Vista 5 SR digital consoles for front of house and monitor mixing.

For nearly ever year since 1989, The Allman Brothers Band has had an annual residency at the Beacon Theatre, where the band’s shows are celebrated for their unpredictability. Because of the band’s extensive catalog of material, remarkable improvisational skills and numerous surprise guest performers, no two Beacon Theatre concerts are the same. This year’s shows have included guest appearances by the Blind Boys of Alabama, Joan Osborne, John Popper, and Luther and Cody Dickinson.

This year marks the first time Studer Vista 5 SR digital consoles have been used for the band’s Beacon Theatre residency, which were chosen for their versatility, ease of use and—most of all—unmatched sound quality.

“I really like working with the Vista 5 SR—in my opinion, it’s the best sounding digital console out there,” Judd said.