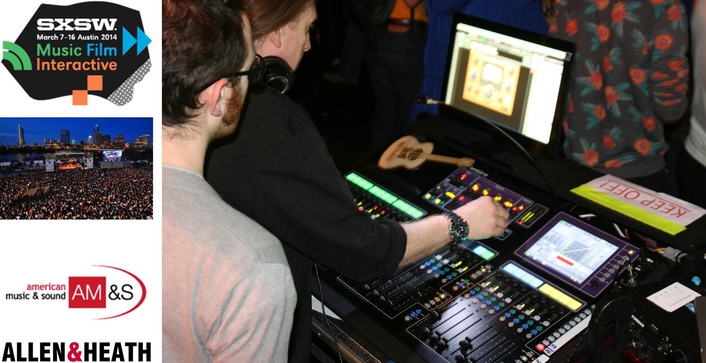 .
At this year’s South By Southwest Music Festival held in Austin, TX, USA, Allen & Heath digital consoles were used to stream the experience live to millions of fans around the world. One of the world's largest music conferences with 100+ music venues, Allen & Heath mixers managed the Festival’s British Music Embassy, sponsored by the UK Trade and Investment Corporation, where over 40 UK bands played sets over a 5-day run, and BBC Radio streamed live to the UK for the first time, and the Dell Computer Fader Fort.

For the British Embassy series there was the challenge of lack of sound checks, plus the need to send the audio signal to the BBC and UK talk shows hosting remote interviews live.

“We had an Allen & Heath GLD-112 with the latest v1.4 firmware freshly installed at FOH position. Plus, we used an AR2412 and two AR84 remote I/O racks to give us a total of 44 microphone inputs and 24 microphone outputs,” Palmer adds.

At monitor position an Allen & Heath GLD-80 with an AR2412 and AR84 being used to control Tannoy iQ Live series monitor wedges.

Now in its seventh year at the festival, the British Embassy hosted the BBC’s first ever showcase radio show live from Austin, Texas. To handle the challenge, the GLD-112 was running WAVES sound grid with a Dante Card split, during the Thursday live web streaming Talk Show, a Focusrite Rednet 6 was used to connect the Dante stream to a MADI signal.

Over at the Dell Computer Fader Fort was Brett Orrrison, veteran FOH Engineer for Austin’s own The Black Angels. All of the live inputs were being run from a remote trailer 400ft from the stage via live streaming with an Allen & Heath iLive-T112 control surface and iDR-64 MixRack running WAVES sound grid.

“The truest challenge of mixing live stream during SXSW, in this case being for Fader.com and Sirius Satellite XMU, is the lack of sound checks and the enormous and ever-changing input lists. The scenario is this: 10 bands per day from completely different genres, with 20-minute set changes, for 5 days straight with no full band line checks. 90% of the time I have no idea what the band sounds like until the show starts, in which case my mix is already live streaming. This means that if I reach for something - be it EQ, Dynamics, Pan, Gain etc. - it better be easy to get to and accomplish what I'm trying to do very fast and in a way that sounds pleasing to the thousands of people in their cars and on their computers. Allen and Heath’s iLive worked extremely well for this. I enjoyed the soft knee button on the compressors. I was able to dial in vocals fast with broadcast quality, and not just any vocalists either; there was Snoop Dog, Erycah Badu, P Diddy, Les Claypool, Wiz Kalifa, Big Freedia, De la Soul, Damon Albarn of Blur, Bun B, SZA, Rick Ross, etc. It had to be dialed in within a few words. I also liked the side chain option in the onboard compressor, which I used as a d-esser at times. The EMT reverbs and the 2tap delay were really useful in helping me create a live concert environment, and I was pleasantly surprised with the depth of the reverbs. Overall, iLive was a great experience.”

Michael Palmer points out: “The iLive system’s unique design allowed us to do this very remote set up with only one CAT5 cable instead of multiple heavy cables, for which there was no room. The system ran flawlessly for five days in rain, heat and snow.”