All Robe for Scala & Kolacny Brothers 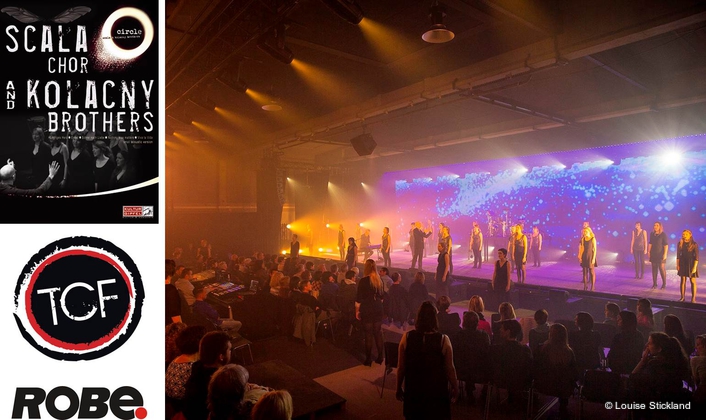 Kristof van Mensel is one of a new wave of highly original LDs from Benelux, and currently part of innovative design and programming collective, TCF bvba (The Creative Factory). He’s involved in a myriad of exciting lighting and visual projects that embrace multiple performance genres from hardstyle dance to choral!

The eleven 20th anniversary concerts staged by Scala & Kolacny Brothers at the Stadsfeesthall in Aarschot, where their whole concept which is now world famous started … was a great opportunity for him to utilize nearly 150 Robe fixtures to deliver these memorable and visually compelling sold-out performances, playing to 750 people a time.

The award winning women’s choir is conducted by Stijn Kolacny and accompanied by Steven Kolacny on piano. Their material is an eclectic mix of special arrangements from well-known artists like Coldplay, Metallica, Radiohead, U2, Nirvana and many others, interspersed with their own material. As you might expect, it veers from classical to rock to full-on techno; from raw and intense to delicate and ephemeral in the same breath!

The 20th anniversary shows featured around 70 members of Scala and also had a narrative, running through Scala’s timeline and highlights from the last 20 years. They are constantly touring worldwide, and Kristof has been the lighting and visuals designer and operator for the last four. 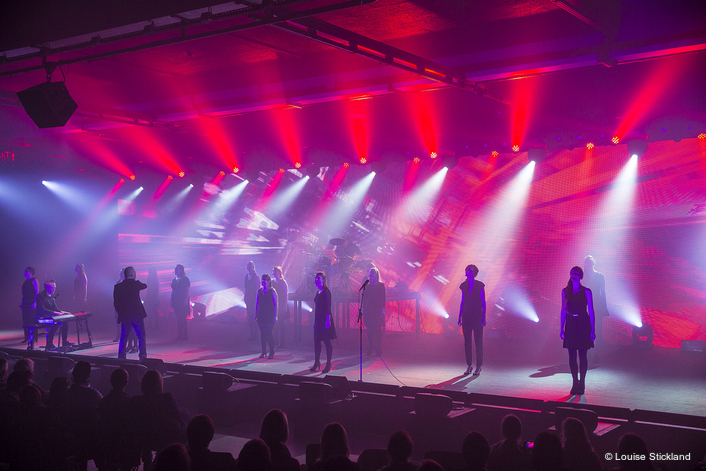 The biggest challenge was shoe-horning the amount of production needed to deliver the show of this stature into the venue, which offered a 20 metre wide stage, but with no more than 5 metres of headroom and almost no wing and backstage space. It was also optimised to fit as many seats as possible with the demand for tickets sky high!

A row of 20 x CycFX 8s along the back were rigged to low profile truss. These were above a 20 metre wide 10 mm pitch LED screen which formed the backdrop and integrated seamlessly with the lighting. 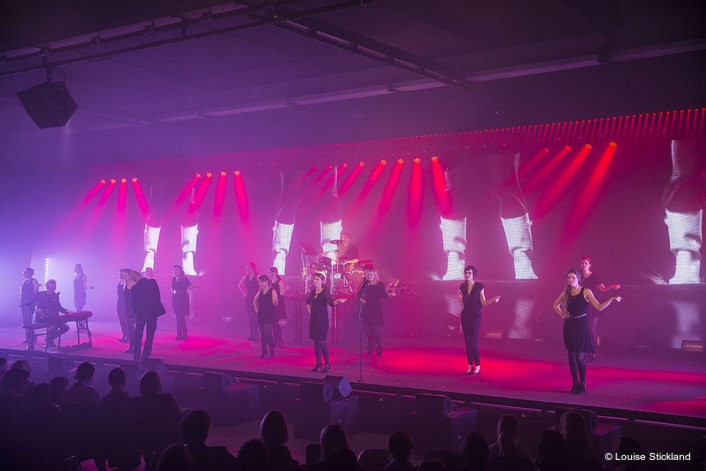 He wanted a big wash at the back to cover the whole stage, and with the output and effects, the CycFX 8s were “perfect” explains Kristof. Being only 10 cm deep, they made an extremely neat linear statement, virtually flush with the truss. The other 18 were positioned along the front of the stage, positioned unobtrusively in the footlights positions. “Together they gave a fabulous even wash coverage which was nice and tight and easy to focus”.

The 12 x LEDWash 600s were hung around the sides and front of the stage on scaffolding and used for illuminating the audience during  the song “Evigheden”, where members of the choir stand out amidst them. He also used them for strobing and a few other surprise funky effects!

The nine BMFL Blades were on the advanced truss which was tight to the roof above the front rows of audience. Ideal for general washes and specials, “It’s pretty awesome being able to do everything on just 9 lights,” stated Kristof. 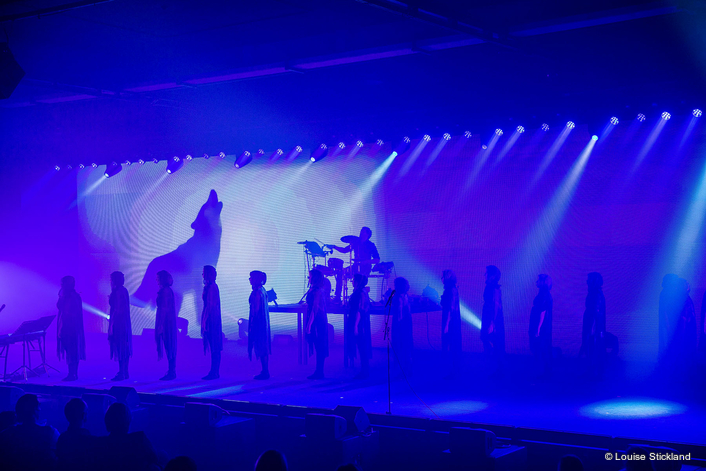 The LEDBeam 100s were scattered all along the back truss which was actually two ground supported trusses side by side, one facilitating lighting and the other the LED screen.

“The LEDBeams are great for long, low spaces like this where you can really increase the sense of depth by using them judiciously. Being reliable, light and small, you can squeeze a lot into a small space!”

The 600E Spots were also chosen for their small and neat dimensions, and rigged along the top and bottom rails of the back truss, creating breakups onto the floor, hard-edged beamy looks and and slow movement effects. 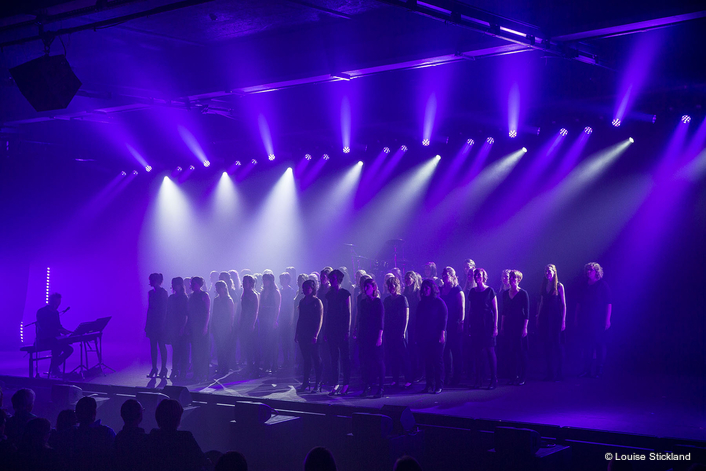 TCF also created content for the show which was stored on an AI media server triggered by Kristof via his ChamSys MQ console with Playback and Execute wings.

All the equipment was supplied by Belgian rental company L & L Stage Service based in Herentals.

Stijn Kolacny underlines the importance of the lighting and Kristof’s role as both designer and operator, “Our live shows overturn many people’s conventional expectations of a choir and the lighting and visuals are an essential element of that experience”.

Stijn personally likes the Robe LEDWashes in particular and the way they can change colours extremely slowly and subtly, “helping to create a real magical environment for the more delicate pieces of music”. 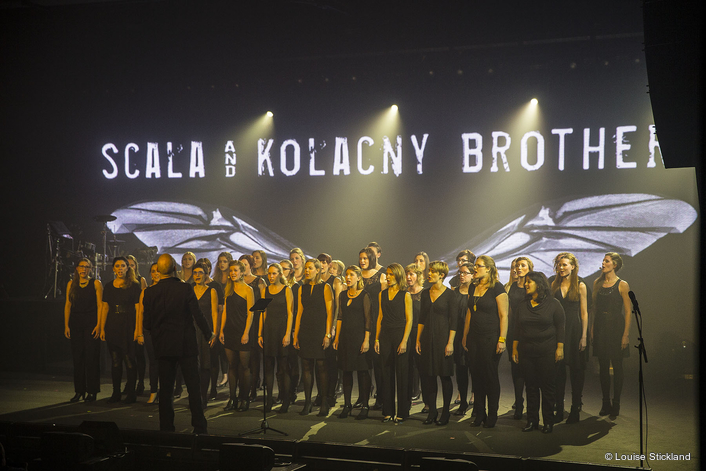 Kristof has been a Robe user for several years and was one of the first LDs in Benelux to beta test the prototype BMFL Spots – in the Pussy Lounge arena at Tomorrowland 2014 – just ahead of their launch.

“I like the diversity of Robe’s ranges, and the fact that there are multiple choices of fixtures, so you can keep going to Robe whatever the style and genre of show you’re lighting,” he observes, adding that he thinks the manufacturer is also good at keeping a few jumps ahead of the competition!

Scala and Kolacny Brothers have used Robe lights on their touring rigs and riders for a very long time – way before Kristof was involved … and are probably one of Robe’s longest-running touring artists!