All Hands on Deck for Brilliant Stages 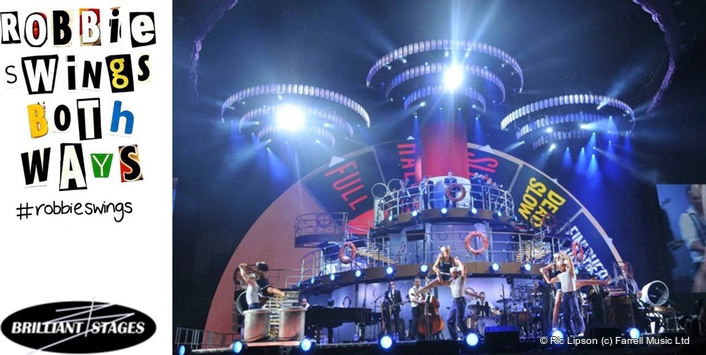 Robbie Williams Swings Both Ways
Brilliant Stages continues its long-standing relationship with top showman Robbie Williams and the ever-inventive Ray Winkler and Ric Lipson of Stufish by its collaboration on the design and fabrication of the stage set for Williams’ Swing Both Ways tour. The dazzling arena tour has seen Williams promote his new album across Europe from April to July, culminating in four dates at London’s O2 arena, before it travels to Australia in September.

The Stufish stage is lavish and multi-layered, transforming in appearance from an Art-Deco hotel, to a 20’s style club and a luxurious ocean liner, and is surrounded by a massive, curved Austrian drape, all of which set the tone for Williams’ sumptuous Swing Era extravaganza and big band sounds.

Fundamental to the set is a 1.8m high, 18.3m x 14.7m main stage with a deeply curved front edge and two additional levels – a mid deck and an upper deck – rising from it. These are built using over three hundred 2.4m x 1m decks supported on custom frame assemblies which use poles to transfer the extra weight of the upper layers to the layers below. The whole is built on a rolling frame with heavy-duty castors that support the extra weight of the layers above and allow the framework to be rolled into place for faster setup.

“We were mindful of creating a structure that would give the support required without looking ugly or showing too much framework,” says Brilliant Stages’ lead CAD designer for the project, Ollie Laight. “The result is a clean, minimalist look which allows the rear video screens to be seen through them.”

Preliminary and final plans for all load-bearing frames and support structure were passed to Brilliant Stages structural engineer, Malcolm Richards, who advised on structural integrity and gave clearance before construction commenced.

The main stage front edge includes a step-down shelf and acoustic mesh, which accommodates space for PA sub-speakers and, like the mid and upper levels, fixing points for lighting. The stage is surmounted by a 14.7m x 9.59m lower base that follows the concentric outline of the main stage and is raised by 15cm using insert legs. 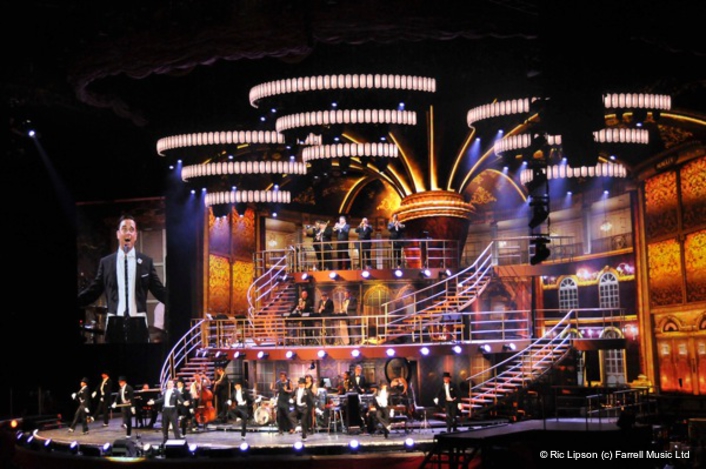 A manually operated star trap is integrated into the main stage framework with built-in dolly wheels that allow it to be simply rolled into place and left in situ for the duration of the show.

Each deck level includes a curved handrail at the front edge and is connected by sweeping ornate performer treads on stage whilst linked backstage by rear access steps. These are a low profile solution of minimal construction to maximise the visual aesthetics and are easy to set and strike: “It is important that these features simultaneously look good and are practical for the crew,” says Laight. “We also had to give them enough support while allowing room beneath for a set of rolling ‘bleacher’ steps, which are brought onto stage and locked into position with brakes, for Williams and a choir of children to sit on during the High Hopes number.”

Upper and lower ‘cabins’ are formed between the three layers using scenic cladding suitable for a quick removal and change between acts. These are finished with additional ‘ship’ and ‘Art Deco hotel’ style quick-release fascia panels for the backline, lower and mid deck sections.

Back down at stage level, Brilliant Stages designed and built stage-left and stage-right screamers, with access steps, on cantilever frames and two 300mm high tech decks. Like the main stage, these are on a system of rolling insert legs for easy deployment.

A 1.2m high ellipical catwalk extends 18m from the main stage into the audience to a B-stage. Brilliant Stages constructed the catwalk on rolling leg assemblies and built the B-Stage on custom-designed dollies with decks that simply fold out to form a platform at the correct height for the B-stage. “This had several advantages in that, not only did it save on framework, but the dollies are right there to hand when it comes to load out,” says Laight. “What’s more, with eleven dollies forming the sub-structure for the B-stage, there were enough to take all the main stage decks and some of the framework too. You can see how much time this saves the crew by not having to retrieve dollies from the car park before loading out. We always try to keep the crew happy!” 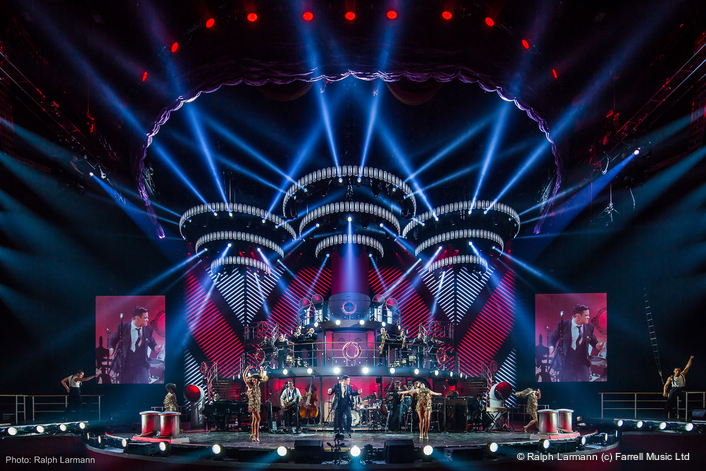 Lighting designer, Mark Cunniffe, planned to use uplighting around the front of the main stage, B-stage and catwalk to illuminate the performers and run content. Over 300 individually programmable lighting units were specified so, to make it easier for the crew whilst retaining the desired look, Brilliant fitted the fixtures into a channel which was then pinned to the side of the deck for quick and easy connection. “It was quite intricate work on our part, but saves the crew huge amounts of time,” says Laight.

The catwalk is accessed from the main stage via two ‘bridges’ complete with access steps. As part of the audience stands inside the catwalk’s span, Brilliant incorporated some cable management solutions to ensure no cables were within reach of the public.

Brilliant Stages was also responsible for the scenic elements and ‘gags’ on stage, collaborating with Pyle to create moulded GRP ‘ventilation funnels’ for the ‘ocean liner’ which appear as period props on the upper deck and main stage. These are removed and stowed when not in use.

Brilliant Stages worked with Air Artists to provide the ship’s crowning glory of two large inflatable funnels which are supplied complete with fan and cart. “The funnels have to appear quickly from nowhere during the scene change so we decided that an inflatable was the fastest way to achieve this as well as solving the challenge of how to stow them,” says Laight. The funnels are inflated by the fan in only 15 seconds and pack down into specially adapted sections of deck where they remain stored for transit. Aluminium frames with di-bond cladding slide into purpose-built slots that locate them around the funnels, adding rigidity and completing the look.

Above the stage, Brilliant Stages worked with drape manufacturers, J&C Joel, and control wizards, Kinesys, to supply the impressive 15m-drop Austrian drape complete with winch mechanism and control. The drape is curved to echo the shape of the main stage and all structural designs and prototypes were submitted to Richards who approved the technical recommendations made by Brilliant’s Tony Bowern and Kinesys’s Andy Cave prior to manufacture.

The final, but by no means the least, visual aspect of the set are three ‘chandeliers’, each with three tiers of ‘crystals’ which hang above this visual confection.  Brilliant Stages created each chandelier fascia from a VAC formed plastic panel which conceals an LED strip (supplied and fitted by the tour’s lighting supplier, Neg Earth) that illuminates it, and supplied it complete with truss fittings. 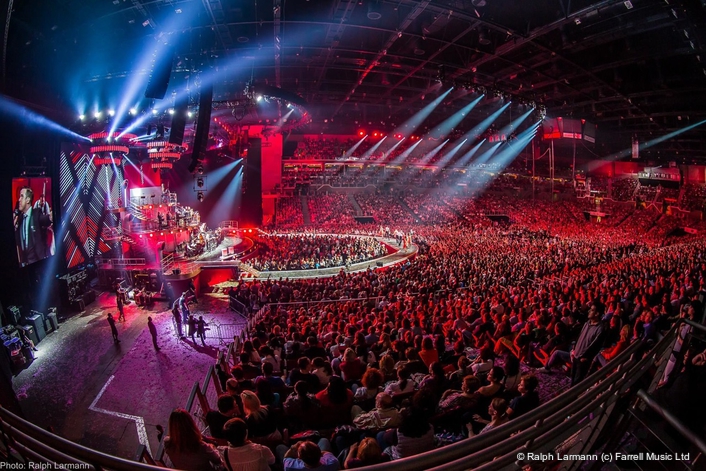 “We experimented and prototyped the plastic to find the precise degree of frosting for the optimum result,” explains Laight. “The whole project called for a considered degree of prototyping and a high degree of collaboration with designers and sub-contractors at every stage of construction for all the scenic elements. This is one of the aspects of a project that Brilliant excels at and enjoys, and one in which our team of CAD designers and structural engineers proves invaluable, especially on a fast turnaround such as this project.”

“Forty-four shows later, the efficiency of the stage design and build has proven itself,” says the tour’s production manager, Steve Iredale. “Having Rick Worsfold, the tour’s head carpenter, involved at the design phase with Brilliant proved invaluable, and his idea for the decking carts that formed the support structure for the B-stage was one of the inspired ideas for the stage construction.

“As always Brilliant has delivered a well packaged, beautifully finished product that has been one of the keys to the success of the Swing Both Ways Tour.”