All Foxes Need is Robe

One of the UK's hottest rising pop stars is singer / songwriter Foxes (Louisa Rose Allen) who recently toured the UK with a fresh, inventive and contemporary lighting design to match which was based around Robe moving lights… and created by Jake Vernum.

Jake has worked with the band for two years. He landed the gig after Foxes played a Student Union May Ball he was lighting. As they were headlining, he designed a bespoke rig and added some specials for their slot, as well as programming and operating, all of which impressed the artist and tour management enough to offer him the gig as lighting director / operator on the road, a task for which he collaborated with LD Cate Carter of Bryte Design. He’s worked for Foxes ever since.

His creative starting point for this latest tour was the band’s request for a complete change in visuality and a step away from the strobe-tastic and lasery look of the previous tour  … to something more subtle, magical and ephemeral. 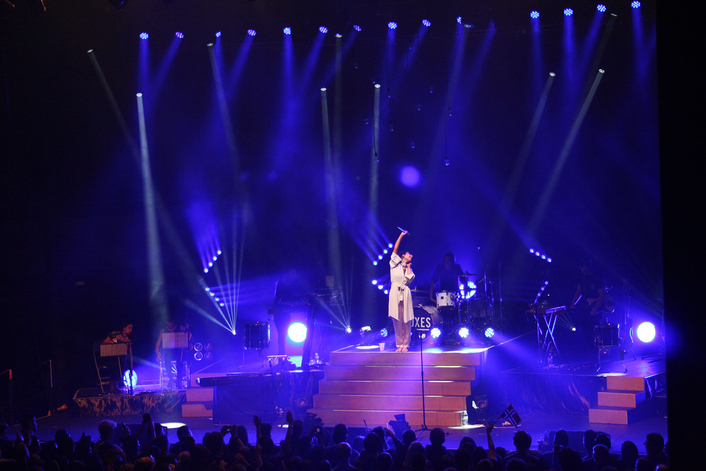 Jake, Cate and Mike Smith from Bryte Design discussed adding some classic theatrical effects like a starcloth / voile backdrop plus more set elements and gold fronted stairs. They complimented the set with a thoughtfully crafted floor package, designed for scalability both up and down to suit all the venues on the itinerary.
The floor fixture layout optimised the scope for dramatic, high-impact looks by firing lights through the backline.

The five Robin LEDWash 1200s were located on each of the five risers, providing strong backlight that perfectly created ‘’’moments of suspense’ when the audience could not tell if the band were onstage or not, forcing all the attention onto Foxes, a technique used at the top of the show and during the moodier acoustic numbers.

These fixtures enabled powerful shafts of colour to be thrown up the 50 X 20 ft upstage voile and star cloth evoking that theatrical look which the artist specifically wanted.

Jake has long been a fan of Robe’s LEDWash series. He thinks the LEDWash 1200s are "extremely bright and a great LED wash light" that also worked well in conjunction with the 4-lite blinders and strobes positioned along the back line. He reckons the strobe macros on the 1200s are pretty cool and likes “using the rings to strobe randomly” which can also be an efficient use of programming time! 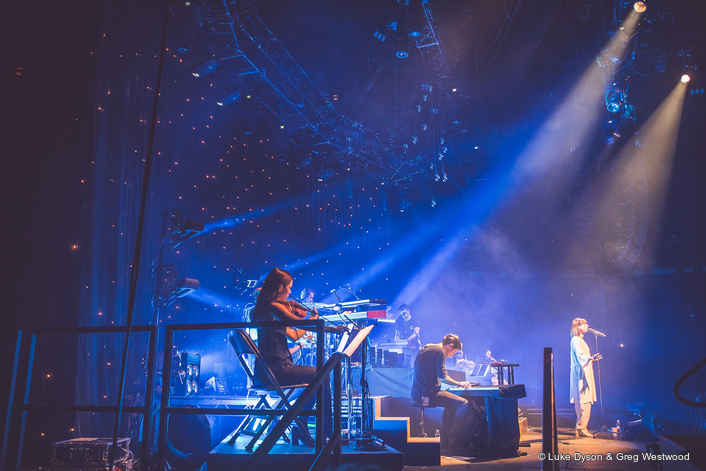 The Pointes were spaced evenly along the back of the stage risers to give an alternative powerful back look, again blasting forward through the backline.

Pointe has been Jake’s “number one moving head profile” for this scale of tour for some time.

On this one they were primarily used in open white, and for the potent beam and gobo shapes plus some hi-impact slow moving gobo looks. “The gobos and prisms are excellent,” he states. Jake also likes the fast movement and tight, razor-sharp beams which he used for the upbeat sections of the set. 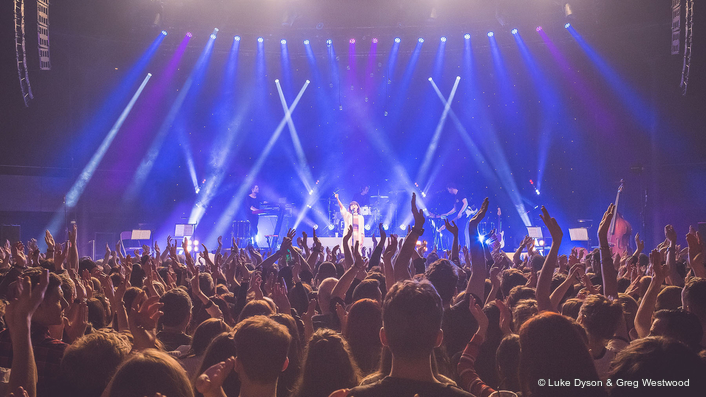 His favourite features on the Pointe are the 6-way linear and 8-way circular facet prisms, which give a break-up that is completely different in quality and texture than standard breakup gobos, or prisms.

The LEDBeam 100s were positioned on the drum riser steps behind the centre vocal position. Jake loves the “small and effective” LEDBeam 100 and used them frequently to draw the attention right to Foxes herself when stood at that centre vocal, a visual reinforcement that is particularly important at the start of the show during huge uplifting moments.

The LEDBeam 100s also created extra layers of depth, their beams shooting out from behind the singer from a position downstage from all the other floor fixtures.

For the Roundhouse show, 18 of the 42 additional LEDBeam 100s were hung on the back truss and the other 24 were used to light around the room.

The Roundhouse’s DLF Washes were used as overhead washes, and more DLF Washes on the front truss coupled with DLX Spots doubled as additional front washes and key lighting.

The touring lighting package and stage set, risers and extra lights for the Roundhouse show were supplied by Pearce Hire.

Jake’s been using Robe products in his work for around 5 years. “Robe is a great brand and recently has produced a raft of exciting products which are ideal for this scale of touring” … he’s interested to see what Robe is going to launch in 2016! 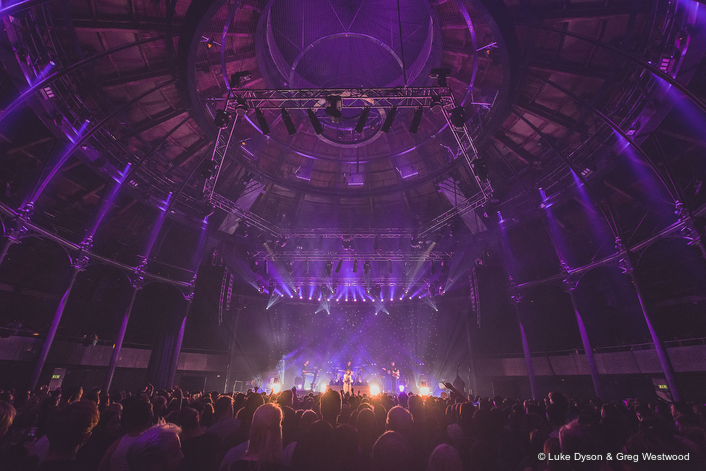 Jake Vernum is a freelance LD based in High Wycombe in the UK and has been in the industry since the age of 14. He became interested in lighting through his father Shaun Pearce who runs well-known rental and installation company Pearce Hire, based in Cambridgeshire. He studied event management at Buckinghamshire New University and worked as a lighting tech at the student union and a house lampy at various academy type venues … which proved a stepping stone to the rough-and-tumble world of touring. Now at 22, he’s one of the new generation of LD’s to-watch with plenty of imagination, enthusiasm and ambition.