Alice In Chains Tours With All HES Rig

LD Marty Postma Creates UpRoar With ShowGun, Cyberlight 2.0, Intellaspot and TechnoArc
Following their headlining slot in the 2013 Rockstar Uproar Tour, Alice In Chains played a series of shows in the UK before taking a holiday break. The band is next slated to perform at the Soundwave Festival in Australia early next year. LD Marty Postma is man behind the design work for AIC's lighting and video systems, in addition to handling all the programming, content wrangling, and day to day operation of the show. He also designed the group's set for the Uproar Festival.

Postma created the rig to wrap around and envelop the band 'like a shell'. He comments, "The band had talked about this shell idea for several years, and we finally had the opportunity to make it happen on a large scale. This approach allows me to create the illusion of depth in several ways. One could think of it as a 3D forced-perspective design." His design incorporates 16 ShowGun 2.5s, 20 Cyberlight 2.0s, 20 Intellaspot and a dozen TechnoArc units. The ShowGun 2.5s are split eight overhead with another eight on the deck and set, while the Cyberlight 2.0s are hung primarily on vertical boom trusses and upstage with a few on the DS truss. The Intellaspots are primarily mid-stage with four on the deck in the DS corners, while the TechnoArcs are all placed on the front truss. 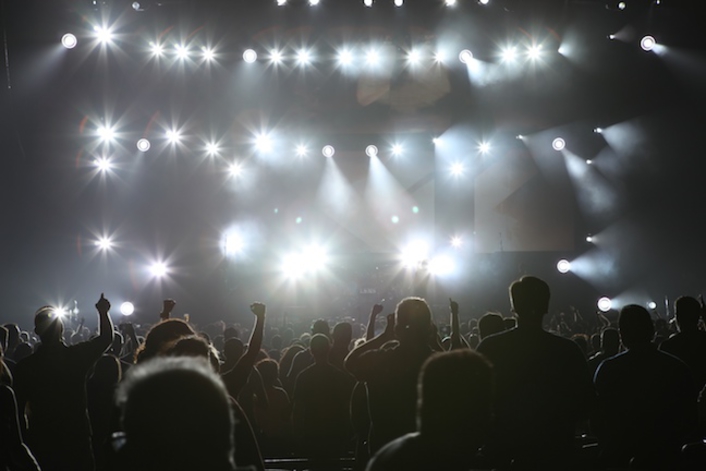 Asked about his preference for HES fixtures, Marty reveals that he specifies them for four primary reasons, the first being their 'extremely bright output and ultra-efficient optics'. He adds, "With so much LED video I need every fixture I use to be able to cut through the brightness of the screens - even when in darker more saturated tones with or without a gobo. This allows me to really carve out the shape of the band and set from the background to give dimension and keep everything from looking too 'flat' or shallow. With so much of the design concept involving the illusion of depth, this is critical. There are loads of fixtures out there that appear to have good output characteristics in open white, but as soon as colors and gobos start coming into play - that is really where High End outclasses all other fixtures. It makes it very easy for me to keep a balanced overall picture." 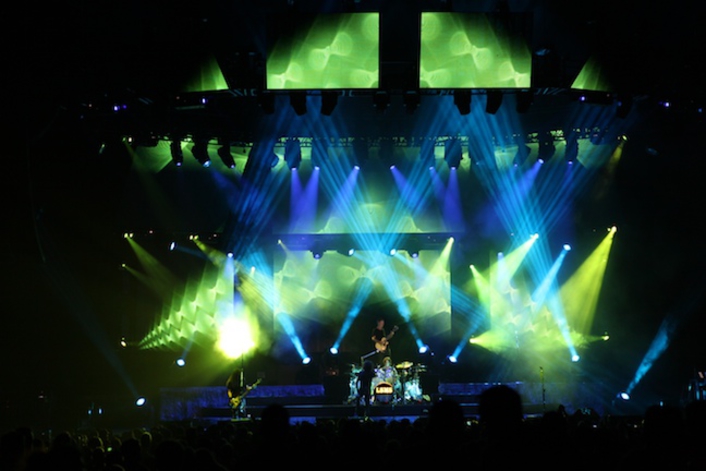 Marty says the hue and saturation ranges of High End's CMY color mixing is another major factor in fixture choice. "Alice In Chains' music is very 'dark' and consequently I tend to use highly saturated colors. This helps to create the illusion of being dark without actually being dark -since that would essentially defeat the purpose. No other fixtures I've worked with are able to get to the colors that the High End fixtures achieve with CMY. There are a few that get somewhat close in a few colors here and there, but they are not nearly as efficient. Their output drops off to the point of being unusable for my purposes. The speed of the color changes via CMY is also critical to me, and the HES fixtures are as fast or nearly as fast as many RGB LED based fixtures in this regard." 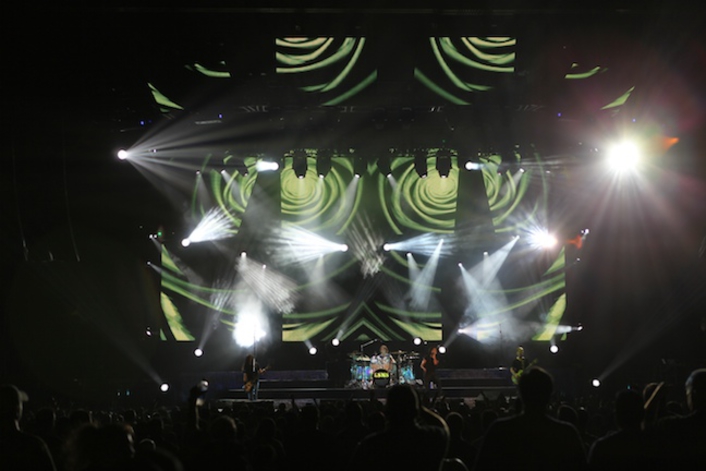 Postma also points out that the large outputting aperture of the fixtures further help him to change the perception of space by framing out the physical hang structure of the system as a whole. And last but not least, the LD says "there are always extra features designed into the High End fixtures that there simply are no equivalents for. These give me a completely different set of options and choices without having to add a whole slew of extra fixtures. The LED tracking rings on the ShowGun 2.5s and the indigo highlighter LEDs on the Intellaspots and TechnoArcs are good examples of these innovations. A dozen High End fixtures are typically far more useful to me than three or four dozen lesser equipped fixtures!" 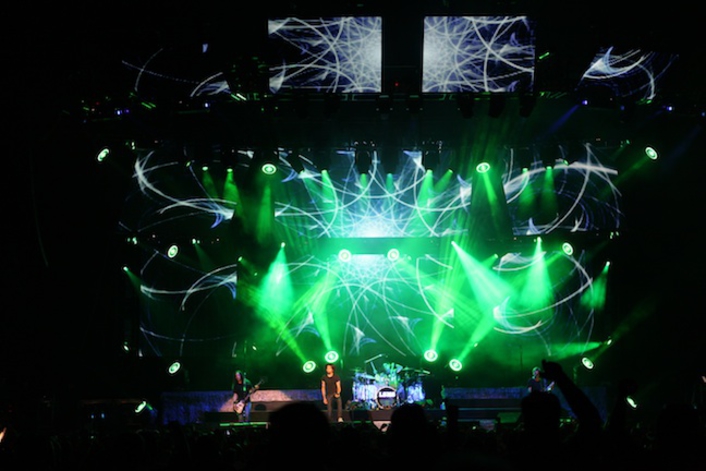 With no less than four cutting edge HES fixture types at his disposal, Postma can cover the gamut of automated lighting requirements. "The ShowGun 2.5s - as their name implies - are my heavy artillery for defining the band from their surroundings," says Marty. "The LED ring is a nice feature that adds another distinctly unique layer to my looks; it economizes the design by not having to hang a whole other system of LED wash lights. The Cyberlight 2.0s are used for creating most of my textural looks with patterns where I need that extra brightness and efficiency to cut through the video. I also chose them for the vertical structures between the video screens, because they move without creating any significant inertia. If I put a moving head fixture in that position, I would then have to add dozens of gyroscopes to counteract the movement of the fixtures and keep the trusses from swinging into the video walls. They also mount very nicely into Upstaging's HUD truss and on their vertical 'torm' structures. The Intellaspots are used primarily to fill and treat the areas around the band (the floor, the set, etc..). A few are used at lower angles to get shapes and textures onto the band members themselves. The Intellaspot animation wheel is by far the best of any fixture I've used thus far, and the stock gobo load gives me far more choices than I ever need. The indigo highlighter LEDs are also really great for that 'extra little bit' when it is required. The TechnoArcs pull double duty, both as front wash fixtures and to create beam looks into the crowd." 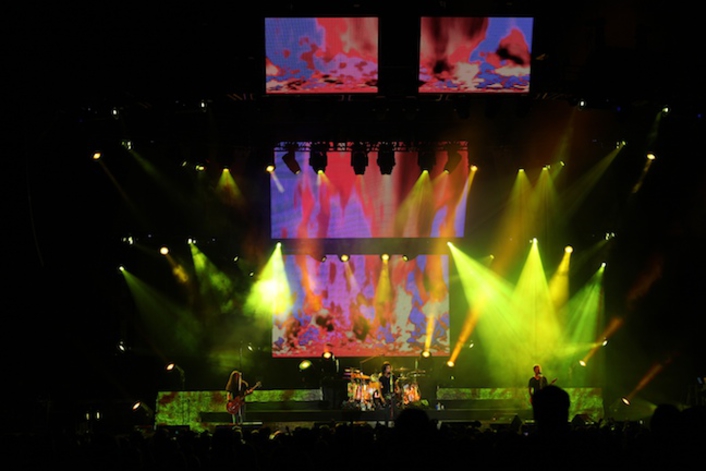 Marty is using the new flagship Hog 4 to control AIC's visuals on tour. "As a long time Hog3 user it's a very natural choice to transition over to the Hog4," says Marty. "Upstaging supplies a secondary console to my own Hog4. This is partially to have a backup in case of physical damage during transport or show, but also to have a desk available for the supporting bands. I have found the Hog 4 to be stable enough to not have to really worry about needing a second desk on the network. I'm excited to see the rapid software developments in the Hog4 since its release less than a year ago, and am doubly excited for the features currently being developed for near future updates!" 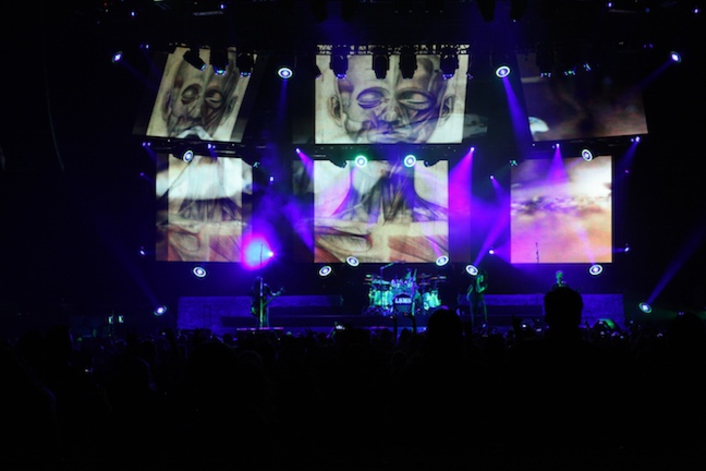 Alice In Chains' US lighting package is supplied by Upstaging; Marty says, "John Bahnick and John Huddleston have both been very supportive of us and provided our last few tours with an unparalleled level of service. Every time I go to prep a show at Upstaging I actually look forward to it, whereas I cannot say the same for many other shops. Glen Claytor is our Upstaging Crew Chief and has done an outstanding job on all legs of our tour. He adds a lot to the ease with which we are able to move the show every day with many very helpful suggestions. Glen even found a way to mount the ShowGun 2.5s inside the pre-rig HUD truss. Our lighting techs were "Cuddles" Wilson and Mike Jacobi, who also do a great job everyday. In the UK we use NegEarth for lighting; Dave Ridgeway and his people have also been extremely wonderful to work with and provide truly top notch service."

In closing, Postma says he's also received exemplary customer service from High End Systems and his other major vendors. "Craig Burross at High End has been very very good to us over the years, and was highly instrumental in making sure everything was up to spec. The set was built by Accurate Staging with skirting supplied via SewWhat?. Both José at Accurate and Megan Duckett at SewWhat? did fantastic work for us and everything came out exactly as drawn and specified right 'out of the box'."

Alice In Chains Locks Up ... Washes for National Tour
Barnes and Thatcher Rely ... Hog 4 For The Big Screen
Hog 4 Debuts in Japan