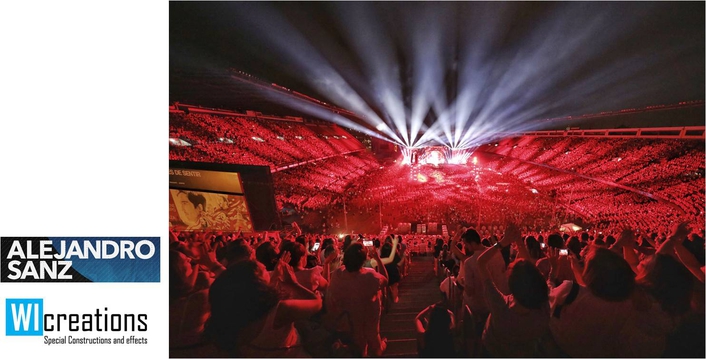 Multiple Grammy and Latin Grammy Award winning Spanish singer / songwriter and musician Alejandro Sanz performed a ‘once-in-a-lifetime’ show at the Vicente Calderón Stadium in Madrid to celebrate the 20th anniversary of his best-selling and landmark fifth studio album, Más, released in 1997.
The production team wanted some spectacular visual moments to make what was already going to be an outstanding show … even more memorable … so the show’s production manager Borja Gonzales contacted stage automation and engineering specialists WIcreations.

WI’s Geert Stockmans headed their team after the introduction, which initially came six months ahead of the gig via Frank Janssens, a Belgian lighting specialist living and working in Spain. Geert and Frank have worked together many times, including on Malu’s 2016 tour.
Containing a diverse collection of ballads strongly influenced by flamenco, pop, and tropical rhythms, Más opened the door to international stardom for Alejandro Sanz who is from Madrid, and it was a pivotal work in his incredibly successful career. 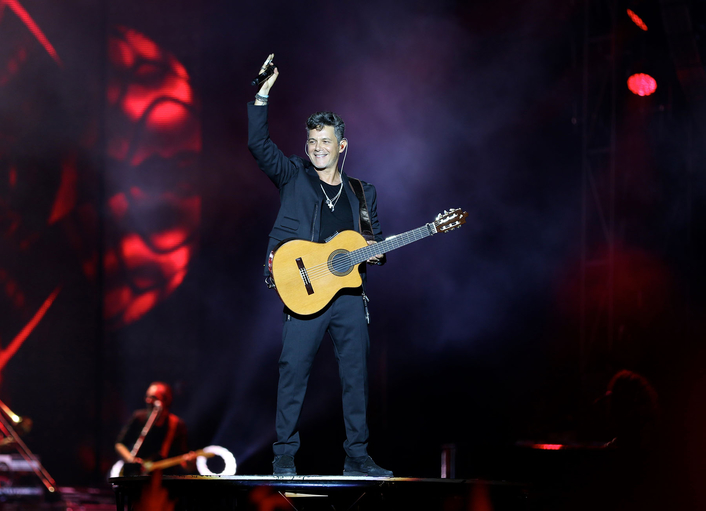 Fifty thousand ecstatic Sanz fans attended the concert, made all the more special, historic – and emotional - for the fact that … as soon as the get-out was completed, demolition began on a truly iconic building, home to the legendary Atlético Madrid football club between 1966 and this summer!
Sanz’ lighting and set designer Luis Pastor already had an ambitious plan! It involved the tracking of LED screen columns around a curved upstage truss to reveal matrixes of moving lights rigged on a structure behind.

Geert had an initial meeting at WI’s HQ in Heist-op-den-Berg with Borja and Frank where they presented Luis’ lighting plot and visualisations.
Immediately Geert saw the designs and had an insight into Luis’ creative goals. He recalled an event a couple of years previously, where WI was commissioned to make and track LED columns on a circular trussing track, which also rotated to reveal moving lights on the reverse side.
He tentatively suggested that using this proven automation technology in a slightly different context and on a larger scale … might actually be a more flexible option for creating the original effect that Luis had in mind. 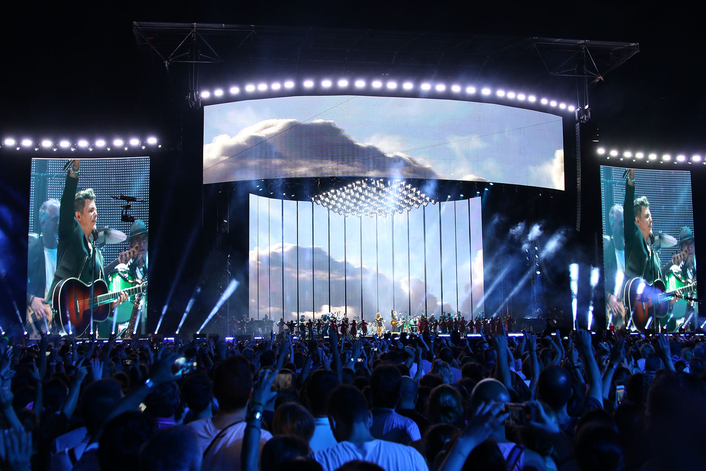 When Luis was presented with this option, he realised that in addition to doing virtually everything he originally envisioned, it would actually bring a whole raft of even more dynamic looks, scenes and transformations to the stage!
Geert then presented Luis, Frank and Borja with a possible set-up in CAD for tracking and rotating the columns, which they loved! From there their initial design plans were adapted to incorporate the WI system.
A bit further into the project, some other movement elements came into play! They wanted to lift and tilt a vertical lighting pod which weighed close to 5 tonnes, and they also added a stage lift to the spec for the B-stage out in the audience, that would be capable of elevating the artist 2.5 metres above stage level.

An ever expanding brief was then extended again, this time to include the automation of two piano risers for one of the show’s frequent WOW moments.
So, ultimately, WI supplied a total of 52 metres of curved tracking system, including the truss to which it was rigged, plus the 16 automated trolley carts to which the columns of LED / moving lights were attached, each fitted with a WI rotating element. Each LED / moving light column weighed 1100kg.
To move the 5 tonne central lighting pod, four 2.5 tonne WI motion controlled hoists were deployed. One of WI’s standard hydraulic stage lifts was also supplied, complete with a 2 metre diameter circular stage platform for the B-stage, and for the two automated piano risers, WI supplied two of their exclusive LCW (laser controlled wagons) plus control.

The trolley carts, rotators, motion hoists and stage lift were run via a Kinesys console, operated by Erik Gielen, while the laser wagons were controlled by Sam Melotte.
They and Geert were joined on site by two other WI crew, Bart van Steen and Jair van Renssen.
“The challenges – and the rewards - of this project were numerous,” stated Geert.
On the challenging side of the equation were the logistics and feasibility of delivering a set of complex requirements.

With the 16 track trolleys for the LED columns and the 5 tonne central lighting pod - without adding on a single item of lighting or video kit - they were already pushing 30 tonnes of dynamic weight loading, and nearing the capacities of the roof system installed in the stadium.
Monitoring the weight loading and ensuring that the weight didn’t increase as the design and production process progressed was a major task.
Numerous suppliers were involved and the LED product specs changed twice during the pre-production period, all affecting the calculations. 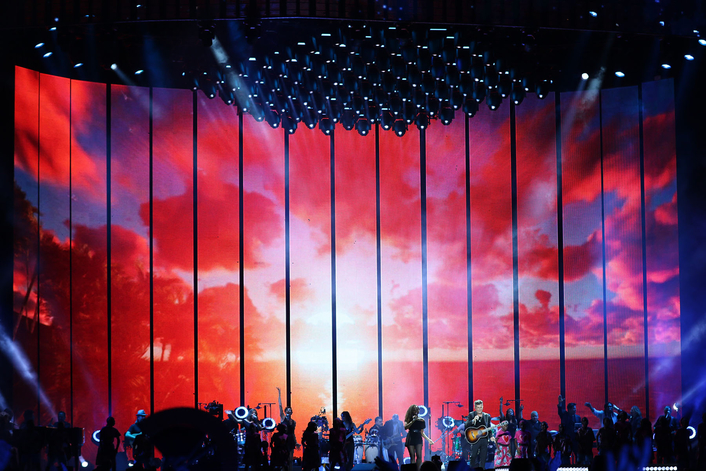 PRG Spain was the principal technical contractor for lighting, sound, video and rigging, so having a close and fluid working relationship with them – notably Xavier Theys and Pablo De La Flor – was essential.
Through its previous work in Spain, WI has built up a good communication with PRG. “Knowing the people there well made a massive difference to the smooth progression of this production from our end,” confirms Geert.
Assisted by PRG’s Belgian office, Pablo and WI co-ordinated a scaled test build of the system in Antwerp’s Sportpaleis three weeks ahead of the gig to demonstrate to the key Spanish production personnel exactly what would be delivered. It was also a chance for any major queries to be answered, and it put overall weight awareness at the centre of everyone’s attention, and underlined its importance to the success of the concept.

“Topping the ‘rewards’ list on this one,” says a very pleased Geert, “was having your expertise and advice taken on-board early-on by the artist’s core creative and production team.” Their flexibility and willingness to adapt initial design proposals to incorporate WI’s ideas and knowledge, allowed them to produce bigger and higher impact effects.
“It was really satisfying becoming a small part of the creative team rather than ‘just’ a supplier,” explains Geert.

It was also good having a reasonable amount of time to work on this project, with the initial approach coming six months ahead of the show. This allowed proper and controlled planning, rather than more compressed timescales which sometimes force quicker - and therefore more compromising - solutions. “It was mainly thanks to Borja that everyone was given this time. He kept everyone involved on -rack and moving forwards, even through the concert seemed ages in the future,” Geert adds.

Finally ... there was also the huge gratification of seeing hundreds and thousands of comments across multiple media platforms – mainstream, social, etc. – about the incredible audience experience of a show that touched so many.

The epic two and a half hour performance saw Sanz engage in a number of unique collaborations with guests of great national and international level including Laura Pausini, Juan Luis Guerra Juanes , Pablo Alboran , Niña Pastori, Malu, Bisbal … and many more.