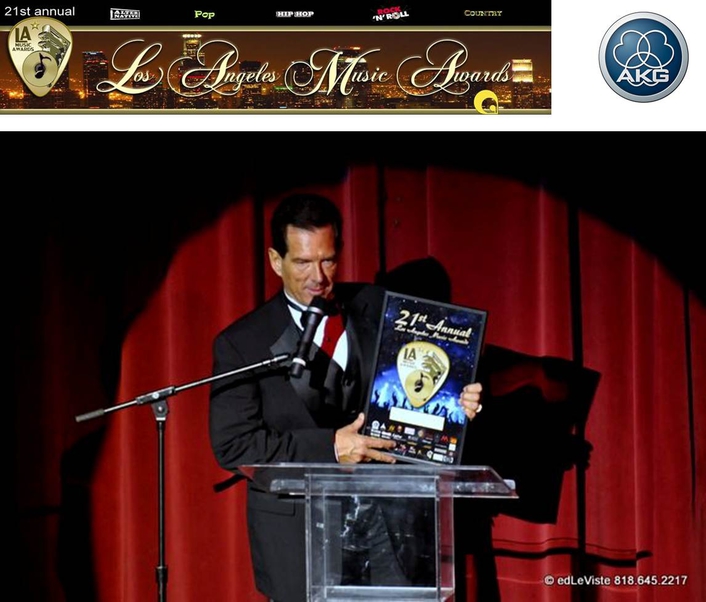 David Osborne accepts an award at the 21st Annual LA Music Awards
With a focus on rewarding the best unsigned performers around the world, the 21st Annual Los Angeles Music Awards ceremony – the longest running independent music awards program – was mic’d through a partnership with HARMAN’s AKG.  Presenters and performers alike donned the world-class microphones and wireless systems to showcase their talents and earn the recognition they’ve worked so hard to achieve.

Held in the iconic Avalon in Hollywood, AKG supplied an arsenal of equipment to support the night filled with emotionally exciting performances and award presentations.  AKG’s WMS 4500 wireless system and D7 capsules were used for all vocal performances, while wired D7’s completed the stage vocal tasks.  The DMS 700 handheld units were utilized for the podium and presenters.  From the Studio to the Stage, the C214’s mic’d the guitar cabs and a C4500B was used for bass. The Perception Groove Pack clipped to the main drum set was combined with C414 XLII’s for overheads. Two D112’s, D40’s and C415B’s were clipped on the Chopper drum set, which resembles a chopper-style motorcycle.

World-renowned pianist David Osborne, more commonly known as the “Pianist to the Presidents,” placed a studio pair of AKG C414 XLS’s on the grand piano during his recital at the ceremony. Osborne has played in the White House for numerous presidents, from Jimmy Carter through President Obama.

“We were very interested in AKG’s offerings to live performers and we wanted to bring that same quality to our stage for the LA Music Awards,” stated Al Bowman, founder and executive producer of the Los Angeles Music Awards.  “The performers, award winners and all participants at the event have a fearless work ethic and provide their own unique style and performance, which helps reinforce AKG’s partnership with the show.  We have built a great relationship with AKG and hope to continue working together as the awards continue to grow.”

With 30 categories, the Los Angeles Music Awards offer artists a free opportunity to be recognized for their hard work and dedication.  Recognition from the awards ceremony propels artists through a renowned program, highlighting their music, writing and playing capabilities.

“Partnering with the LA Music Awards allows AKG to continue offering top-quality performance microphones and wireless systems to those artists looking for their big break,” stated Joseph Wagoner, product manager, wireless-tour-install for AKG.  “These artists work tirelessly and we are happy to provide equipment that is used in top-selling tours and recording studios around the globe.  These artists put their entire lives into their work and deserve to have their art heard at a professional-quality level.”

AKG also supplied the microphones and wireless systems for the LA Music Awards Nomination showcase in LA’s Whiskey A Go Go Club.  “Simply put, AKG delivered,” continues Bowman.  “We presented such a wonderful, true sound during our show and we look forward to keeping this partnership alive throughout the years.”