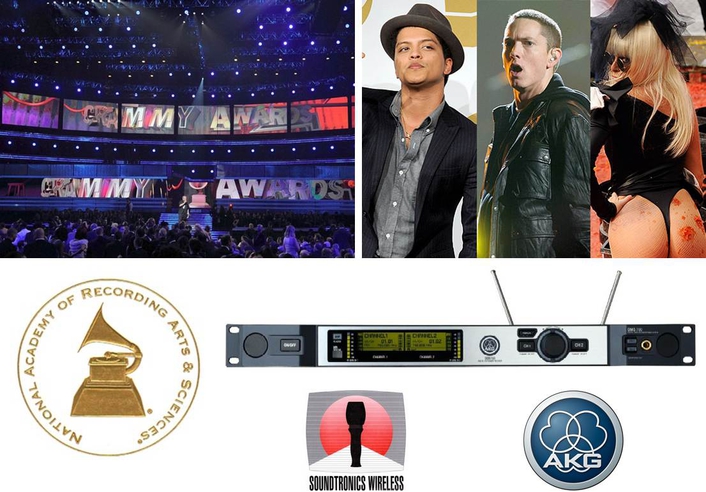 Deployed by Soundtronics Wireless, AKG microphones were a success in the eyes of GRAMMY Awards Audio Director, Michael Abbott
Music’s Biggest Night® would be nothing without sound. As the world watched their favorite musicians perform and present at the GRAMMY Awards®, AKG was tasked to provide flawless audio through its DMS700 wireless microphone system and corresponding D-series microphones. Held at the STAPLES Center in Los Angeles on Sunday, February 13, the GRAMMY Awards honor those who have achieved recording greatness around the world.

Throughout the telecast, AKG equipment was utilized to deliver key announcements, including the introductions of Ricky Martin and Miley Cyrus, to the live crowd and millions of at-home viewers. Located at two stations during the awards, numerous D7’s and DHT700 handheld mics were in front of the main stage as well as in the satellite stage outside of the arena.

Deployed by Burbank, California-based wireless microphone specialists Soundtronics Wireless, AKG microphones were a success in the eyes of GRAMMY Awards Audio Director, Michael Abbott. “The AKG DMS700 system’s digital transmitter delivered audio without the compander artifacts associated with most RF hand mics, “ Abbot said. “In the RF-intensive environment of our live GRAMMY broadcast, the system operated extremely well. Our mix engineers were pleased with the smooth frequency response of the DHT700 and D7 handheld mics.”

Utilizing the AKG DMS700 system for the first time, David Bellamy, owner of Soundtronics was pleased as he monitored the mics during the show. “The AKG system and microphones performed very well and are great pieces of equipment,” Bellamy said. “We’re still getting used to the system as we only debuted it at the GRAMMYS, but the more I learn about it, the more I like it and the more I like it, the more I’ll integrate it into our equipment rotation.”