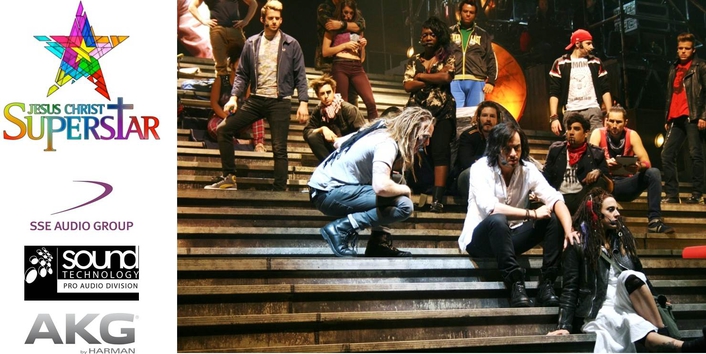 .
Andrew Lloyd Webber was just 21 years old when he and Tim Rice collaborated to pen Jesus Christ Superstar. Now, more than 40 years later, Laurence Connor's contemporary take on the production, which features former Spice Girl Mel C and Australian comedian Tim Minchin, is in the midst of an arena tour of the United Kingdom. Sixty of HARMAN’s AKG C544L headset mics are deployed for all vocals during the show, and according to both FOH and monitor engineers, the mic was ideally suited to this particular application.

Both engineers talked to Redditch-based SSE Audio Group's director, Yan Stile, whose company provided the audio for the tour, and requested an organized “shootout” to find out which microphone would be best suited to the job in hand.

“I arranged for the best current offerings from all the major microphone manufacturers to be set up and tested through a smaller version of the show's touring sound system,” Stile explains. “They were looking for sonic performance, stability during head movement, ease of mounting and durability; and after a full day's testing, the unanimous choice was the AKG C544L. We also did a blind test with a number of other experienced engineers, and the result was the same.”

With the amount of dancing and acrobatics on this production, the cast mics needed to be in the optimum location at all times, regardless of head movement. Monitor Engineer, Seamus Fenton, says the C544L was the perfect choice.

“We did our A-B tests with about 12 different microphone models, and the C544L came out on top – none of us had ever heard one in action before, but we soon realized what an amazing mic it is,” he states. “Literally everyone is using one on this show, and the sound it puts out really suits the production too; it was certainly head and shoulders above the rest in all departments.”

“It was very much a production decision to go with the AKG mics,” confirms AEG's Keith Wood, production manager for the show. “Because this is essentially an arena rock show, we realized we needed a head-worn microphone that would be more roadworthy and provide a greater output level and better off-axis rejection than some models currently favored in musical theatre.”

Jesus Christ Superstar opened on September 21 at London's O2 Arena and played host to several other sizeable venues including Wembley Arena and Liverpool's Echo Arena. It closes on October 21 at the Motorpoint Arena in Sheffield.