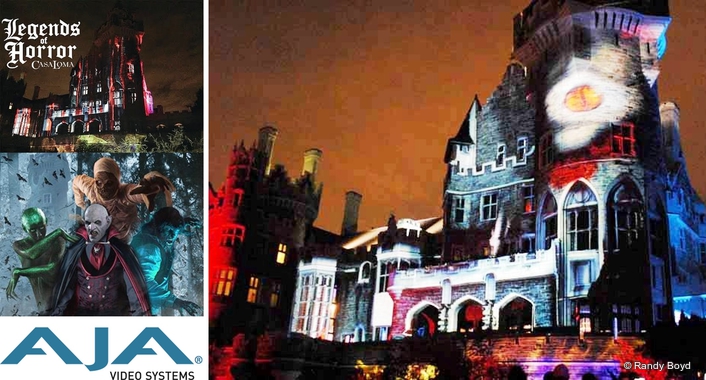 Built in 1911, Toronto’s sprawling Casa Loma is rumored to be haunted, making it the perfect setting for the haunted house experience “Legends of Horror.” The promenade theatre featured dressed sets augmented by fog, sound effects and animatronics, bringing the venue alive for this year’s Halloween celebration; more than 70 actors representing iconic horror characters like Dracula and Frankenstein and 3D and laser projections took the experience to a whole new level. Production designer, independent VFX supervisor, colorist and editor Clark Graff lent his services to the project, including the creation of intricate 3D projections such as a plague ridden tunnel overrun by rats and dead bodies, a hellish fire, a demon possessed tree and more. AJA® KONA 3G and Io™ 4K and were key in the creation of each projection.

“I’ve used AJA products almost exclusively for more than 15 years because they’re reliable, and this project was no exception; it’s that simple,” Graff shared. “Reliability is worth more to me than anything. If gear breaks on a project like this, especially when it’s live and time sensitive, you’re up a creek without a paddle. With KONA 3G and Io 4K, I knew I’d be set.” 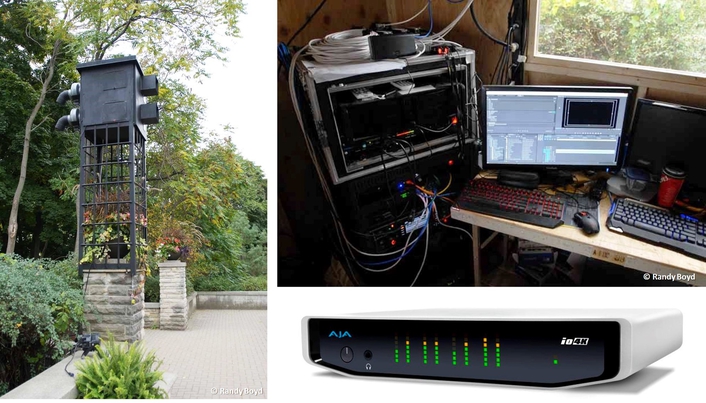 From the start of the project, Graff realized that access to electricity would be limited throughout the grounds. He first walked the castle and surrounding gardens with Liberty Entertainment Creative Director Nadia DiDonato, script in hand to determine where each part of the story would take place, breaking it out into 20 different zones. Graff then built a power map to assess the required resources to service all the lighting and 3D projections for each zone, and set out to select, create and refine the projections.

Graff collected footage that served the story, mostly stock, in addition to projection mappings from Big Digital. Once approved, he previsualized each projection and colored it to fit a range of traditional and nontraditional surfaces – from plasma screens to mosquito netting, a tunnel, tree and more. AJA KONA 3G capture and playback cards were integral to the previsualization process, with two systems running Adobe® Premiere® and Assimilate® Scratch®. Using AJA’s mobile Io 4K capture and output device via Thunderbolt™ 2, Graff was also able to preview 3D projections in UltraHD. The imagery was processed on a desktop system outfitted with AJA’s KONA 3G, running Premiere and Scratch for greater stability and color fidelity while monitoring. 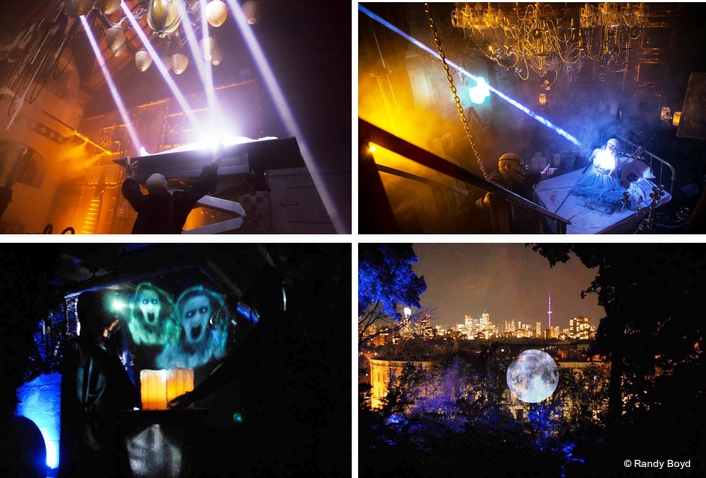 Once finalized, projections were fed through a range of projectors located throughout the castle and surrounding gardens – including the Barco HDX-W20 Flex (4), Casio XJ-UT10WN (8), Casio XJ-2600 (4), AAXA LED Android™ (24), AAXA M4 Mobile LED Projector (1), and OPTOMA ML750ST (5) – to eight plasma screens and other surfaces. Antari fog machines, 116 speakers, more than 300 lighting fixtures, actors and wicked costumes rounded out the experience. 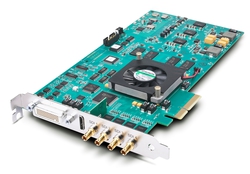 About KONA
The AJA KONA family of capture, display and mastering solutions for SD, HD, 3G, Dual Link HD, 2K and 4K on a Mac™ or PC offers maximum connectivity like 3G/HD/SD SDI, component, and HDMI, along with the flexibility of AJA's superior conversion capability. From KONA IP to KONA 4, AJA’s KONA cards provide unparalleled performance and reliability, and support a broad range of creative software.

About Io 4K
Io 4K is the next evolution of capture and output hardware offering a full set of professional video and audio connectivity with support for the latest 4K and UltraHD devices and High Frame Rate workflows. The power of Thunderbolt 2 enables Io 4K to handle a wide range of formats from SD to HD, Ultra HD and full 4K over both SDI and HDMI and support 4K frame rates up to 50p/60p.

About AJA Video Systems, Inc.
Since 1993, AJA Video has been a leading manufacturer of video interface technologies, converters, digital video recording solutions and professional cameras, bringing high-quality, cost effective products to the professional, broadcast and postproduction markets. AJA products are designed and manufactured at our facilities in Grass Valley, California, and sold through an extensive sales channel of resellers and systems integrators around the world.