Adlib Laughs Long and Loud with Mrs. Brown & Her Boys 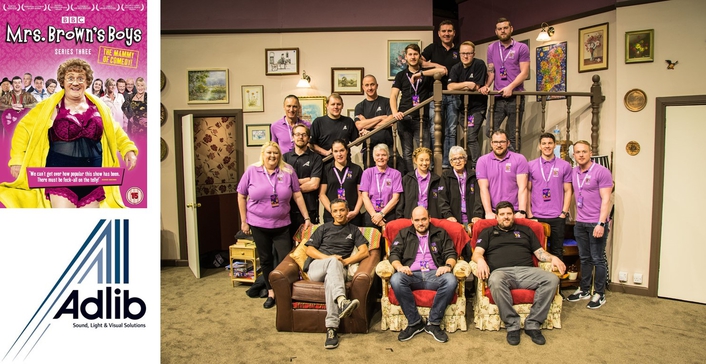 The show has continued to invest in production values and technology to keep everything moving forward along with the humour. Adlib’s director and account handler Dave Jones looked after the Audio elements alongside senior account manager Dave Eldridge who oversaw the Lighting & Video requirements. Jones comments, “We are immensely proud to have worked with Brendan and the cast over the years and to see the concept grow and develop. We’ve enjoyed a fantastic, very honest relationship for over a decade and it has been an amazing journey”.

The opportunity of a long-term relationship has also given the chance for a fluid dialogue to develop, and for Adlib to be very much in tune with the client’s requirements, the show itself and exactly what’s needed in terms of cutting edge production technology.

For this latest run of arenas, Adlib’s project manager Kevin Byatt returned to oversee the team. 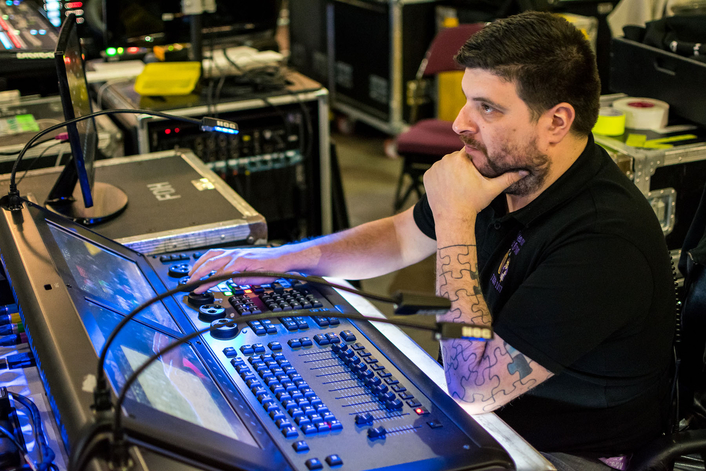 Lighting was again designed by Mike Summerfield, who has been on the Mrs. Brown production team for some years, each tour creating something new and original.

This time he was also lighting for the video cameras as well as the live audience, so wanted to use powerful lights to get the full stage wash effect, and also be able to approach lighting the stage from several different physical angles.

For this reason, and for their excellent CTO, he chose Martin MAC Viper Wash and Viper Profiles for the primary moving lights. These gave him both the tungsten emulated warmth that suits elements of the show and all the features needed to create additional dynamics.

There were three main overstage trusses - front, back and mid.

The back truss was loaded with MAC Viper Washes and profiles plus Claypaky Sharpy Washes which were used to hit a 24 inch mirror-ball rigged on its own personal truss and flown in and out at strategic moments.

The mid truss contained a row of Viper Washes to fatten up and enrich the overall stage wash, and then on the front truss, 14 more Viper Washes were added, together with four Viper profiles for keylight and specials.

A tab-track truss was flown in line with the downstage edge of the set carpet with returns on each side, so the tabs could draw open and then be concealed from view. An ‘offstage truss’  then mirrored the line of the tab-track along the front and around the sides, which provided positions for another 9 Viper Washes and two Viper profiles. These fixtures were invaluable to help with extreme side lighting.

So, it was a case of good all-round placement of fixtures for the maximum coverage.

Atmospherics for the final scenes were supplied via two DF50 hazers left and right of stage. 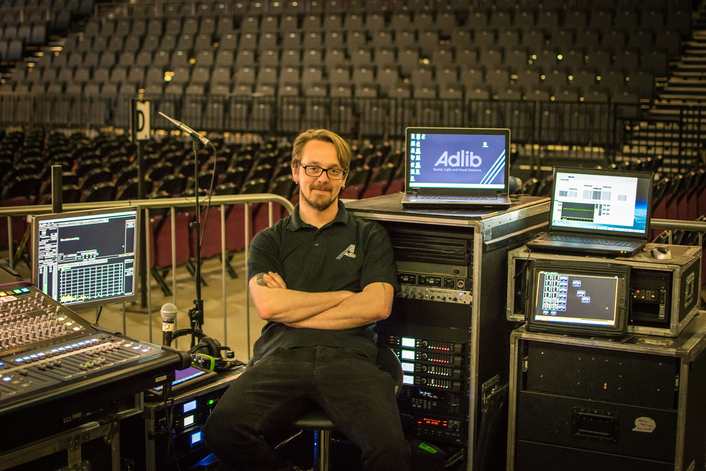 A Road Hog Full Boar was Mike’s console of choice, fully networked with a second desk for backup, and Mike also controlled six set practicals (wall lights) powered from an Avo ART2000 dimmer, together with all the stage lighting.

Mike loves going on the road with Mrs. Brown’s Boys, commenting that they are “unique in the way that all the cast and production are like family, a vibe that’s generously extended to all the crew”.

The video factor of the tour expanded dramatically with the 2015 shows, a trend that has continued. Taking what is basically an intimate theatre presentation concept into arenas means that the IMAG screens are crucial to conveying all the facial expressions and punch lines that deliver the comedy so brilliantly.

With the screen direction they also aimed to bring some distinctly televisual touches, as they were effectively shooting a live sitcom.

Two cameras were stationed at FOH with the other two house left and right, closer to the stage. The FOH cameras primarily picked out group shots, character movements and specials, while the left and right ones captured more of the close-up action, focussing on those essential facial expressions and ensuring that they remained key to delivering comedy successfully in a large venue.

Eric used a Blackmagic design Atem 2m/e switcher to process the camera channels and output them to screen. In addition to feeding the three IMAG screens – left, right and delay - feeds were sent to the green room and dressing room areas and to a series of small monitors deployed around the back of the set to allow cast members to see what’s happening and fine tune the timing of their entrances.

Behind the main set was the ‘cinema’, a seated area with sofas and a large plasma screen allowing cast members to gather and follow the action.

A new addition for this tour was the pre-show Fan-Cam, which worked well as an audience warmer and allowed the video team to capture some truly hilarious moments and great characters in the audience. They could key in graphic images designed by Conor Gibney over the live picture from the console’s on-board media library. 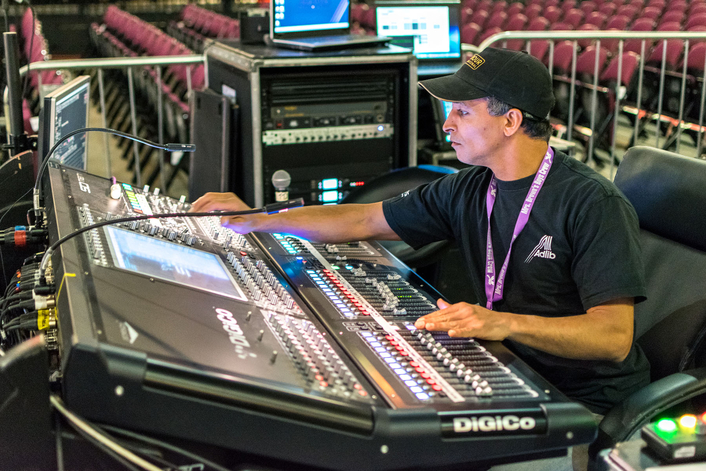 There was also a pre-show VT package comprising a soundtrack and a mash of behind-the-scenes footage from Mrs. Brown D’Movie, TV show and previous tours, played out from a Mac running PlaybackPro.

The screens themselves were looked after by Adlib’s Rob Bickerstaff and were made up from Adlib’s Absen 3.9 mm A3 Pro HD product.

The biggest challenge for Kev and the crew has been the load ins. With a lot of infrastructure having to be in, up and running the same day whilst factoring in an elaborate set build all happening simultaneously, Adlib supplied additional techs for the ins and outs who assisted Rob with the screen builds and de-rig, while Ian and the touring video crew looked after the rest of the video set-up. It is a formula which has worked extremely efficiently.

Lighting & Video Manager Dave Eldridge commented, “It has been an exciting challenge to devise a plan that ties all disciplines together and can be delivered efficiently. The speed of the process is a testament to Kev and the team”.

Getting the right sound for comedy shows is as vital as lighting them correctly … it’s all about the vocal delivery, the tones, nuances, enunciations, etc., and that’s why Alan specified Coda Audio. The products are “astoundingly clear, detailed and with less distortion than I have ever heard” he said, adding that coverage is extraordinarily predictable and will throw for miles.

All these combined to provide a “beautifully smooth, homogenous, highly intelligible sound across the whole arena” says Alan … so what Hassane is hearing … is exactly what the audience are hearing.

Alan also mentioned that it’s near-impossible to make the Coda feedback … even with 14 DPA headsets onstage! “I’ll be honest” he insists, “There is literally no other speaker type we would want to use on this show!”

Two 16-deep Coda AiRAY arrays made up the main hangs, with 8 x Coda LA12 / 4 ViRAY downs for the side hangs plus a centre cluster of four Coda ViRAY. They used TiRAY in / outfills and eight SCP-F subs, with two hangs of 8 ViRAY a side for delay, (three of 6 in Glasgow), completing the system. 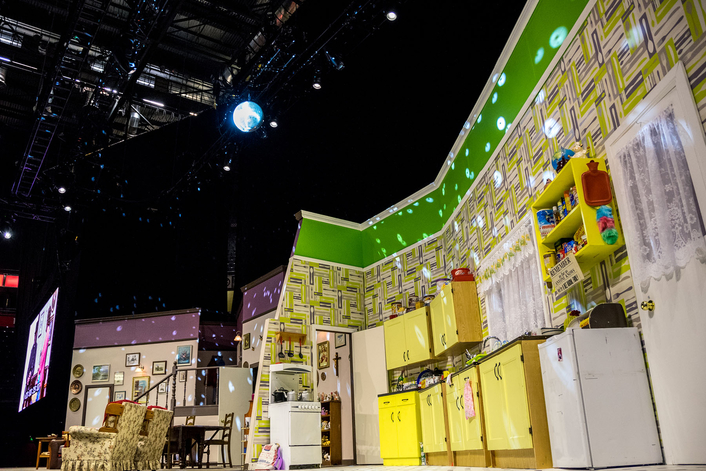 As well as delivering the usual superlative quality audio, there are a few sonic brain-teasers with this show.

No speakers onstage, both for the overall show aesthetics and for sightlines … hence the use of the centre cluster to fill the triangle between the main stage hangs and the front of the audience.

The system was powered by 36 x Coda Linus 10 amps with inbuilt DSP. Alan describes the speaker presets on these as ‘insane”, explaining, “they are phaselinear right down to the  sub / low crossover area, so although there are multiple speaker types, achieving a seamless transition between all of them is super easy”.

They are also low latency, another given for a spoken word show, especially where cameras will expose any lag in audio processing!

For zonal and EQ control they utilised 3 x Lake LM44s at FOH feeding a pair of LM26s and a Focusrite Rednet. These were networked with redundant Dante for audio over TAC-4 fibre. The stage rack streamed AES into the Linus amps which utilised AES over Cat5 up to 96kHz, and the whole system was clocked at 96 via an Apogee Big Ben to preserve the full clarity and detail from the DPA mics … which the Coda speakers excel at delivering.

The FOH control, a DiGiCo SD10 with SD rack, was also clocked by the Big Ben at 96kHz, with a Lake LM44 for EQ inserts, a fully redundant dual QLab system for cues and stings and a MacBook at front of house using a DAW to perform virtual soundchecks.

The SD10 is Hassane’s console of choice for a number of reasons. It’s a familiar surface that makes it easy to create a powerful snapshot system (there are 120 snapshot cues in the show) and audio processing which he reckons is “sonically perfect”.

The monitor console was a DiGiCo S21, taking post mute stems from FOH of the Boys, the Girls and Mrs. Brown’s mics, blending these with various QLab stings, VTs, etc. 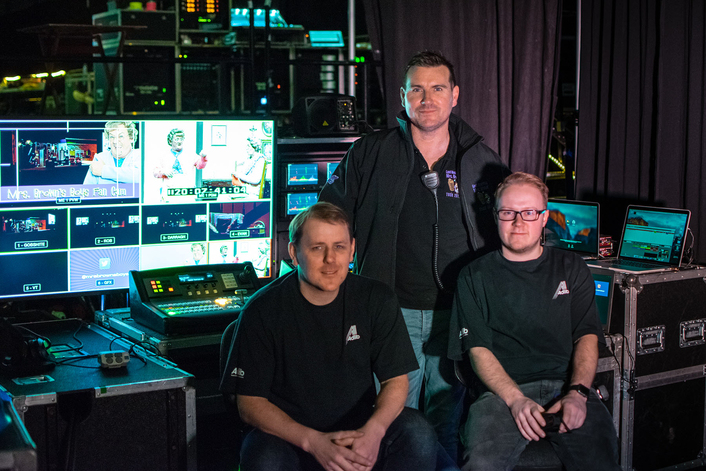 The monitors comprise two flown L-Acoustics ARCS per side … a legacy going back to the start of the show’s touring history, allowing the cast to receive precisely the fold-back they are used to.

Backstage are four Adlib AA61 speakers to relay the programme feed to the waiting cast.

Alan, Hassane and the team all enjoy various sonic brain-teasing challenges of the show and solving them, which can be really satisfying.

There’s a lot of improv in the show, so everyone is kept on their toes night-to-night, but the one constant is that through the years of working on the production team for interesting and hilarious production … it is the overriding and hugely welcoming family atmosphere that makes it a real pleasure to work hard and do the gig!