ADLIB Gets in the Mix At Creamfields 2013

There is a strong local and regional affinity between Adlib and Cream, the night club that began as a cool house music experience in the heart of Liverpool in 1992 and grew into the vibrant, global brand it is today which includes staging the legendary annual Creamfields UK event.

Chris Neary designed lighting and co-ordinated visuals for all four Arenas based on the fundamentals of offering an amazing visual experience; the rigs being flexible enough  to look different throughout long periods of operation … and accommodating specials and the additional requirements for specific artists.

Cream Arena
This was the biggest tented space on site and the starting point for visuals was trying to make it appear bigger and wider still, extending the lighting into the auditorium to envelop the audience and further involve them in the action.

Three ground supported goal-post structures were installed and hung with video – supplied by XL Video – extending the sides of the stage right and left out to the edge of the tent. Neary took full advantage of these as hanging points for lighting as well, attaching Showtec Active Sunstrip fixtures on the goalposts, together with 12 x Martin MAC Aura LED wash fixtures to break up the blocks of video screen. 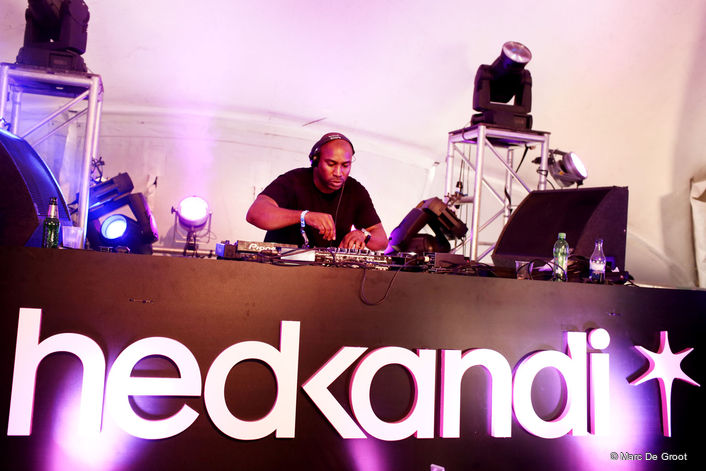 Onstage there was a large video wall behind the DJ booth, so Adlib rigged three trusses over the stage, and on the back two of these installed a total of 12 x Martin MAC Vipers profiles and 12 x (of their new) MAC Viper Washes. Neary wanted bright high-impact fixtures that would hold their own against the very bright LED screens. Two Atomic strobes also graced each truss.

On the front truss were six MAC Auras for front wash onstage and three 8-lite Moles for audience illumination.

Above the audience two trusses were rigged from the tent king poles running across the width of the space, each fitted with a total of 16 x MAC Vipers, 16 x Viper Washes and 8 x Atomic strobes.

The operators in Cream were Adlib’s Andy Rowe and Nathan Harrison using a Road Hog Full Boar and an Avolites Pearl Expert to offer any visiting LD a choice, both consoles running expansion wings.

The main challenge was accommodating a large visiting lighting and visuals package based around a substantial circular truss that came in overnight on Saturday for Sunday night headliners, Sub Focus.

With this in mind, Neary’s ‘house’ rig was designed to leave the space as clear as possible and make the process as seamless as was practical.

The design was based on stage left and right off stage trusses each hung with a set of Pixled F-30 panels together with six MAC 301s, complete with four MAC 700 Profiles ground rigged a side.

At the back was another truss rigged off the ground support with five vertical columns of F-30 panels dropping down to about 6 ft off the deck. A row of MAC 700 washes were rigged along the top of the truss and underneath and the deck-to-screen gap was filled with a row of Mac 700 profiles sat on flightcases. In between the six gaps in the screens were two MAC 301s on 2ft drop bars … so at a quick glance, the back wall could resemble a solid wall of visual material and pixels – which brought massive versatility to the party.

The operators were Neil Holloway and Neil Smith, using an Avolites Pearl Expert for the lights and a Catalyst media server running all the video content, which was specially prepared by Adlib’s media team for the weekend.

Skream & Benga
The original visual concept for this space involved ‘shards of video’ for the environment  so Neary created an apex-down triangular LED centrepiece onstage from 17 panels of  Pixled F-30, which was flanked by two trusses making V shapes either side, loaded up with Clay Paky Sharpies, MAC Auras and 2-lites Moles to delineate the architecture. 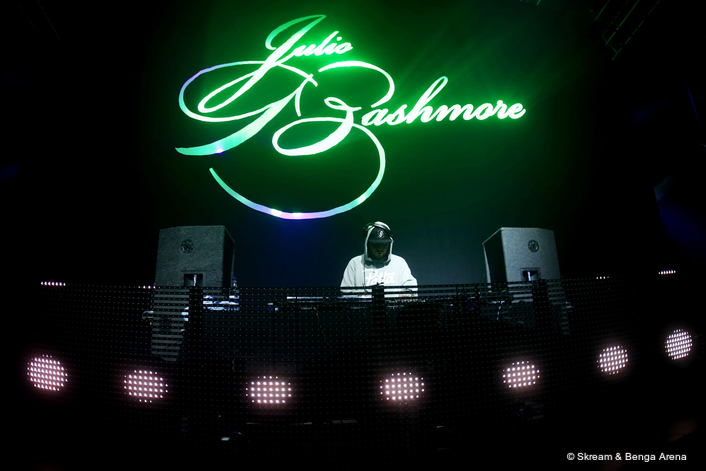 Beneath each truss on the floor were another six pieces of F-30 staggered in a 3-2-1 format from the stage edge into the centre.

Above the main triangles each side were another four MAC Auras and four Sharpies.
They used a ground support system in here and onto the legs of this rigged MAC Auras, Sharpies and Atomics, and augmented the top edges of this structure with 2-lites and Atomics – the idea being to get a flexible and full-on face of lights in all directions.

They used a ground support system in here and onto the legs of this rigged MAC Auras, Sharpies and Atomics, and augmented the top edges of this structure with 2-lites and Atomics – the idea being to get a flexible and full-on face of lights in all directions.

The flown front truss featured 12 x MAC700 Profiles and Washes plus 2 x Atomics, and the same fixture count was repeated on the audience truss which, as in Annie Mac Presents, traversed the space flown above the FOH position.

To widen the stage aperture, six MAC 700 Profiles were sat on flight cases each side of the stage wings, which also cut nicely across the stage and skimmed the audience with  dramatic low-level sweeps.

The Road Hog Full Boar with Playback Wing and Avo Pearl Expert with touch Wing were operated by Charlie Rushton and Chris Richardson, and Adlib supplied another Catalyst media server for the video … again with tailored content for the event.

One of the beauties of providing both lighting and visuals for Skream & Benga and Annie Mac was the ability to produce a beautifully choreographed and coherent visuality across the entire space.

Hospitality
The set up of this area was three conjoined tents and a central area, in which Adlib flew a circular truss and installed an attractive LED sculpture.

A small stage was lit with ETC Source Four Junior Zooms and the main room lighting fixtures were attached to the tented structure, comprising MAC 350 Entours and MAC 301s in pairs, picked for their small size and light weight as well as the effects – they were an ideal fit for creating mood lighting in all three rooms.

MAC 250 Beams on truss towers provided some effects and jazzy stuff for the DJ sets onstage and PixelPAR 90s were also used for stage lighting and toning the truss towers.

This busy area was looked after for Adlib by Jeff Bond and Phil Woodridge.

Chris Neary also Crew Chiefed the project on site and he & his eight operators were joined by six extra crew for the in and the out.

The challenges on the physical side were the long days and operating stints from around 2 p.m. each day until 4 a.m. the next, although the operators also worked a shift system to ensure there was always someone relatively fresh on the desk.

The creative challenge was to design four completely diverse systems for the different environments, all with enough latitude to look varied and completely different to people coming into the tents throughout the operating hours. 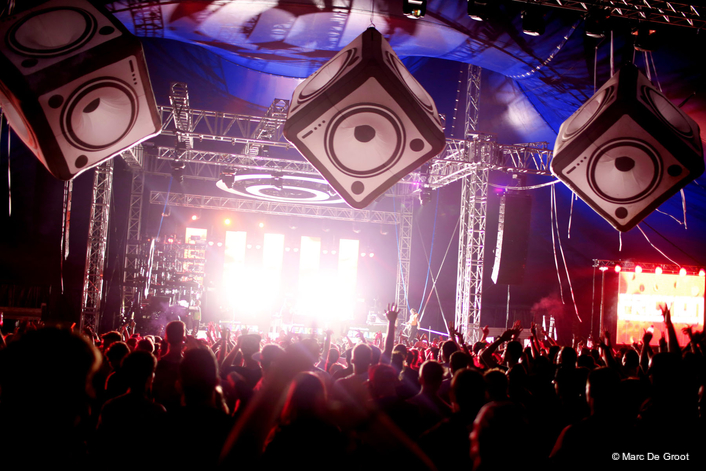 The key aural requirements for electronic dance music are even coverage from the front to the very back of each arena to bring dance-loving festival goers right into the heart of the ‘live experience’. Heart pumping bass is absolutely essential and the music should always match the power and vitality of the visuals.

In the Cream Arena Otto Kroymann and Rhys Roberts looked after a large JBL system which supplied the power, oomph to fill out the enormous tent with fabulously smooth, rich, even coverage.

20 x JBL VT 4889s a side formed the main hangs with six 4889s per side for the delays and a sub-tastic array of 24 x JBL VT4880 VerTec subs combined with eight L-ACOUSTICS SB28s. Monitoring was via 8 x Adlib MP3 low profile wedges and the DJ fills were four L-ACOUSTICS ARCs – two a side - on top of a single SB28 a side – for full-on sound Ecstasy - all run via 2 x Yamaha PM5D consoles.

Keen to showcase the adaptability of the Coda systems Adlib deployed these in three areas – Skream & Benga, Annie Mac and Hospitality.

For monitoring, they utilised Adlib’s own FD / DF speakers for DJ fills, together with eight Adlib MP3 wedges.

In Annie Mac, there were another 20 x Coda Airline LA12s and 16 x Coda SCP-F subs for the main system with DiGiCo SD10 and Soundcraft Vi1 consoles, Lake processing and speaker management and Adlib proprietary DJ monitoring. This was looked after by Dave Ryan and Tom Geoghegan.

Coda again proved an ideal solution for Hospitality with 8 x Airline LA12s and eight Airline LA8 infills for the main stage and area together with four Adlib 1214e infill speakers for the side tents. Engineers Mark Johnson and Vidmantas Baleisa utilised a Yamaha LS9 for mixing.

The compact and versatile Coda ViRAY is an ideal PA for this gig where the flying & weight limitations of the Arenas/Tents make it vital to have a lightweight box and ensure the PA is powerful enough to get maximum coverage & intelligible SPL to every part of each Arena.

Says Adlib Director Peter Abraham, ““Expectations are high at any event but here working with the Cream brand, LarMac LIVE and delivering to the very high expectations of the client & to their audience …. is Adlib’s ultimate challenge”.

ADLIB is Top Of The Pops With Radio City Live
ADLIB Go To Wembley Stadi...apital FM Summertime Ball
ADLIB Gets It Better with Guetta