ADLIB Gets It Better with Guetta

.
Leading UK sound company ADLIB continued its reputation for further sonic enhancement of the hottest dance music on the planet, amping it up for the world’s most popular DJ, David Guetta at his recent high-energy London Alexandra Palace show, over the Queen’s Jubilee Weekend.

Account handler Phil Kielty commented , “With The Queen’s Jubilee Celebrations going on, an England FC football match and two huge David Guetta shows - London was THE place to be for the weekend & David’s shows didn’t disappoint . Will-i-Am did a guestspot which amazed the Chelsea FC guests. The sound, visuals and entire production were breathtaking … with  Alan and the Guetta team bringing a little piece of Ibiza to London at the other well known Palace that weekend!”

For this gig, the audio system was collectively specified by a combination of Es Siahi and Guetta, together with ideas and input from one of ADLIB’s A-Team combinations – systems engineer James Neale and Carlos Herreros. Neale and Herreros were joined by another ADLIB crew member Jay Petch to complete the team. 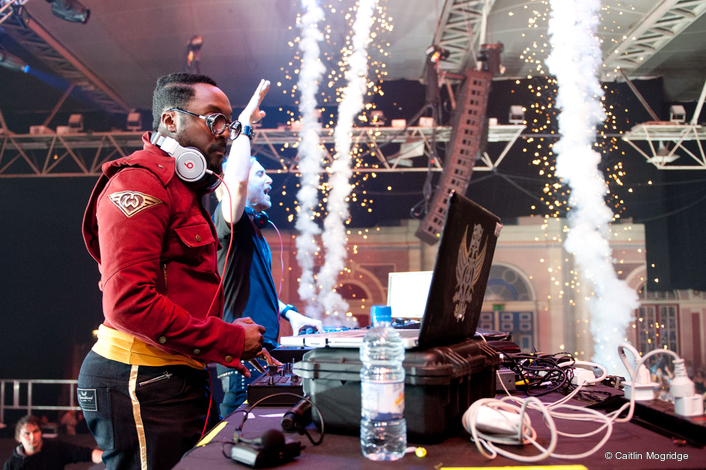 They chose L-Acoustics K1, which provides exquisite toning for Guetta’s rich multi-layered mixology. Apart from the quality of the audio, Guetta has always been very loyal to the premium French brand.

Eight K1 speakers were used for the main left and right hangs to fill Alexandra Palace’s Great Hall, which has a capacity of 10,000, together with two side hangs each of 6 x L-Acoustics Kara boxes. Two further hangs of another 8 x K1s a-side were used for delays, positioned level with the FOH mixer.

Rigging the hangs precisely - a key to getting the sound absolutely spot-on in the room - was a challenge requiring some fairly complex bridling to get the motors precisely where needed.

To ensure voluminous bass around the room, eight L-Acoustics SB28 subs were ground stacked each side and run in cardioid mode to clean up the backstage area and keep the energy focussed well into the audience.

For in-fills, they used L-Acoustics ARCS speakers– three per side with two centre-stage.

The monitors consisted of two stacks of one dV-SUB with three dV-DOSC speakers on top, which is Guetta’s favourite combination. 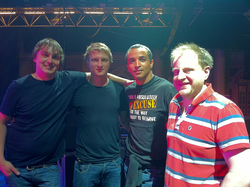 The monitors consisted of two stacks of one dV-SUB with three dV-DOSC speakers on top, which is Guetta’s favourite combination.

Es Siahi engineered the show using a Soundcraft Vi1 console and one of ADLIB’s standard control racks containing Lake LM 44 and 26 processors – two of each.

He also used a couple of external Millennia valve preamps and compressors inserted across the raw mix which is crafted by Guetta onstage and sent as a left and right mix to Es Siahi’s console for outputting through the main system. Guetta mixed his own monitors straight from his mixer to the amps via the Lakes.

James Neale’s knowledge and experience of the venue was also invaluable in optimising the system to get the very best sounding show, ensuring that ADLIB played its part in another fantastic night of superlative dance production.

Production Manager Alan Green stated, "What a fantastic couple of shows that was. The ADLIB guys really nailed the sound for me, they are definitely my ideal team for Guetta's shows. Superb audio combined with our thrilling one-off lighting design (by Jonathan “Leggy” Armstrong) for Ally Pally and the Pilot Vision’s bespoke really made the audience's night".