ADLIB Gets on a High with All Time Low

.
Lively US pop punk band All Time Low recently played an incendiary show at London’s Wembley Arena - one the biggest gigs of their career to date – that was also recorded for a future live DVD.

Immediately beforehand they undertook a 7-date European tour for which they hired a control package from Liverpool based Adlib, who also supplied the full audio production for the highly charged Wembley show.

Adlib has enjoyed a long term working relationship with All Time Low’s FOH engineer Phil Gornell, who confirms that it was imperative that he worked with a company he “trusted completely to ensure the job was done absolutely properly”.

An Adlib Team of Alan Harrison, Jay Petch and Hassane Es Siahi headed to Wembley with an L-ACOUSTICS K1 system which was rigged and fine-tuned to perfection for the show, complete with all those Adlib magic touches that produce such a great sound.

The subs were a left-centre-right configuration with 16 x SB28s running in standard mode.

The system had to deliver the band’s powerful and distinctive sound throughout the whole arena so for front fills, they used four ARCS boxes a side with four dV-DOSCs across the lip of the stage.

The console was the same Midas PRO2 that they used on the tour. Alan Harrison comments, “Midas definitely had the ‘heritage’ to deal with a full-on punk band like All Time Low. It sounds full and big, and can produce plenty of level with maximum precision”.

Phil Gornell stated, “Adlib and I know one another really well now – they know my style of  mixing and I trust them inherently to select the right PA system for the job in hand”. 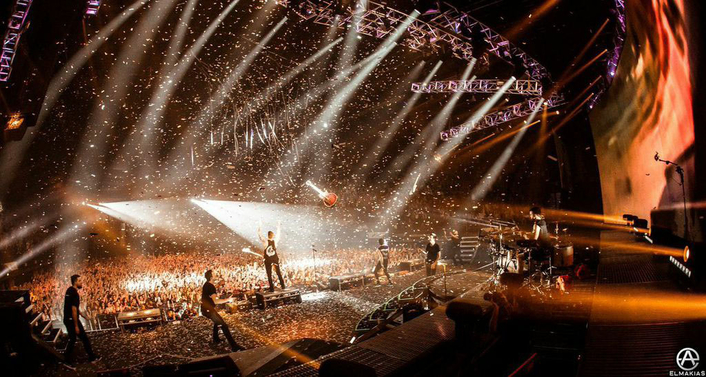 He adds that – with the show completely sold out – they needed something that was “pristine and clinical” as well as potent and with a bit of attitude. “Using K1 also meant there was ample low end floating around the room already, so we needed less subs”.

Phil ran a Waves MaxxBass enhancer plug-in and a Soundcraft Realtime Rack to run a number of assorted UAD plug-ins.

Adlib provided one of its standard Lake LM 26 / 44 racks to deal with all the system EQ and processing, which was run in conjunction with L-ACOUSTICS’ Network Manager.

For monitors, five band and three technical IEM mixes were provided, all run through a Midas PRO2c by band monitor engineer and Production Manager Daniel Nickleski, again a console picked to produce that classic very reliable known-and-loved Midas sound … and with an incredibly small footprint. This was exceptionally useful for the European venues which were smaller than Wembley.

There were no wedges but the side fills comprising an ARCS box and an SB28 per side brought plenty of sonic atmosphere to the stage and left the site lines nice and clear for the camera shots.

Daniel Nickleski commented “I chose to work with Adlib for the first time on this tour due to meeting Phil Kielty and Dave Jones. Both came across as guys who are genuinely interested in not only seeing the band go somewhere, but helping in the process. Mix that with the fact that they have great gear packages … and my decision became a no brainer!

“The Wembley show was a huge success. A lot of that success was due to all of our vendors, including Adlib Audio. The crew at Adlib were always waiting right by our side to make sure everything was perfect for the show. They made a very busy day for me a lot easier.”

One of Adlib’s Soundcraft Vi3000s was used as a separate recording console, run by Jay Petch. This was one of three fully redundant recording systems used for the gig.

One recorded through the Vi3000 running on Dante; another recorded from the direct out of the Vi3000 via the MADI card and a Focusrite Red 6 mic preamp / equaliser (which converts digital audio to assorted protocols) and the third recorded via Dante from the network bridge of the Midas PRO2 stage rack …. Just in case there was an issue with any of the hard drive recorders! Happily … the contingency wasn’t needed, but all felt it was a good work practice to follow!

On the Adlib crew, Phil Gornell enthuses,”Alan Jay and Hass were brilliant and on-point the whole time!  The rig sounded amazing, our 48-input patch was handled effortlessly and Adlib even assisted with our 3-way record rig for the DVD shoot. Our time at Wembley just would not have been possible without them! Nor would it have been possible without Dave Jones, who co-ordinated all the kit, crew and logistics from the office in Liverpool with his usual self-effacing methodical thoroughness.”

Phil Kielty, Client manager added, “We’ve waited probably six years to work with All Time Low and it was most definitely worth it. The band are very exciting live and their crew bring a real family warmth to the working environment which rubbed off on everyone. Daniel Nickleski has been amazing to deal with as were all of the staff and crew at Wembley Arena.

The B-Stage idea worked brilliantly, with an appearance by Cassadee Pope. Phil really gives a warm CD-like quality to the entire mix, and as a fan, their Wembley show ticked every box for everyone there”.