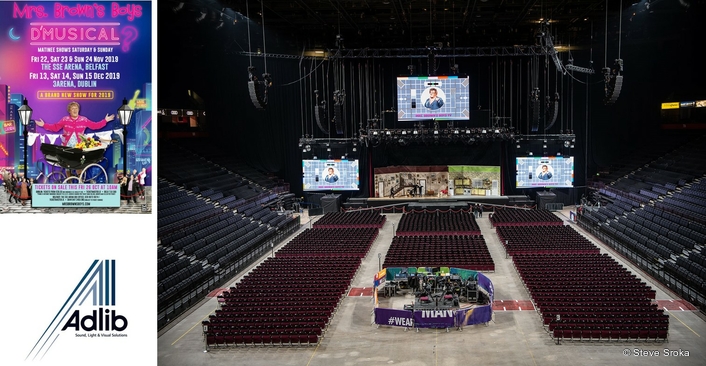 Continuing an excellent working relationship that stretches back nearly 20 years – to 2000 to be precise – Adlib is supplying full technical production - sound, lighting, video and rigging with over 100 points - to the ongoing 2019 arena tour by Brendan O’Carroll and his Mrs. Brown’s Boys phenomenon. Presenting its first ever musical tour, “Mrs Brown’s Boys D’Musical!” the show has just finished the first of three one-month segments, each covering four major cities where they play for a week.

Hassane es Siahi is the FOH engineer, the Adlib systems engineer is Alan Harrison, Steph Fleming is the monitor engineer and Shona Steadman is looking after mics and RF. Lighting has been designed by Mike Summerfield. Fiona Gibney & Gareth Woods are the producers.

With up to 18 people onstage at any one time as the cast and creative elements push the envelope, as a technical solutions provider, Adlib ups the ante for this most technically complex Mrs Brown’s touring show to date.

Once again, a comprehensive CODA system was chosen to deliver sound for the tour. Alan Harrison is a big advocate of the brand, especially for theatrical style shows like this.

He’s worked on the last four tours dating back to 2012, and it’s always been CODA since then … providing a winning formula of power, clarity and handleability.

As with any comedy show, precision is the mission so people can hear the enunciation and intonations very clearly, getting every punch line and gag effortlessly and comfortably … and the challenge is delivering these levels of intelligibility throughout large cavernous arena spaces.

The cast members all use a variety of DPA headset mics which are sensitive and very transparent sounding. The stage design includes a thrust, another potentially tricky dimension needing careful audio consideration and positioning, so a key for this system design was to have multiple smaller speaker arrays around the rooms, including left-centre-right delays halfway down.

This ensured that enough energy reached all the right places without getting bounced back and reflecting around the place.

The two main PA hangs were smaller than normal – with (max) 12 x CODA AiRAY a side, flown slightly further downstage than the standard positioning. 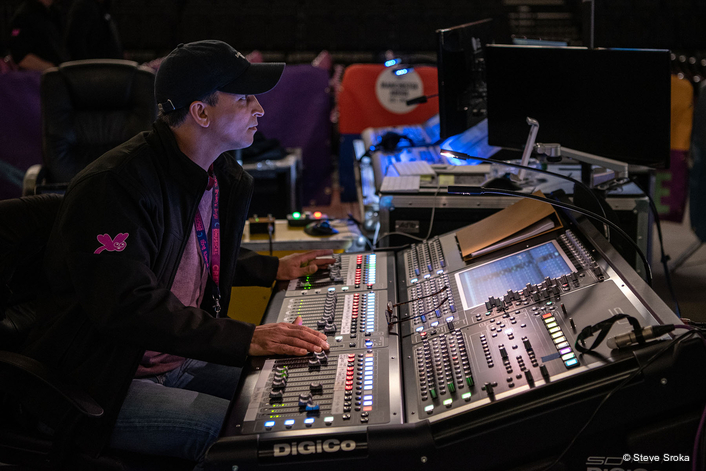 Hassane at FOH on DiGiCo SD10

The subs were 12 x CODA SCPs, positioned six a side on the floor.

The side hangs were kept as discreet as possible – both for acoustics and sightlines – these comprised of up to 8 x AiRAYs, with four ViRAY downs depending on the venue.

A flown centre cluster of six ViRAY covered the first rows of audience.

CODA APS (array point source) speakers were attached – via special brackets – to the lighting trusses just above the corners of the thrust. These, coupled with more HOPS on brackets on the stage, allowed the focus of the audience in the first rows to be drawn directly towards the actors, keeping the immediacy of the humour.

The delays comprised 8 x ViRAYs each on the left and right, with eight of the little 5-inch TiRAYs in the centre which Alan comments “pack a real punch” for their tiny size.

Getting it right is something of a black art requiring those multiple fills plus some magic from Alan and Hassane’s combined fund of sonic expertise and experience!

All of the flown speakers and those attached to the trusses were powered by 18 amplifiers – 9 a side – and with TiRAYs, APS’ and HOPS’ being run passive / 1 amp channel each and the AiRAY and ViRAY bi-amped, so 2 channels … making an extremely efficient amplification footprint for an arena show, but with absolutely no compromise on the SPL.

The cable infrastructure was also very expedient with one Socapex to each hang, enhancing get in speeds which had to be optimised! With the amount of scenery, props and stage set, the PA crew were under pressure to get all their flown elements floating super-quickly so all the other departments - apart from rigging - could go in ‘underneath’.

Alan reports proudly that this stage of the audio get in – also assisted by CODA’s well known quick-rigging capacity – literally flew in and up in around 30 minutes from when they were handed the points!

Shortly after this, their speaker arrays were at trim, ready for the next stage of positioning the speakers on the lighting trusses. The efficiency and smoothness of this prompted many compliments from local crews!

Onstage the cast use side-fills for monitoring rather than IEMs which is proving a better solution for their specific brand of musical comedy. These were an array of 3 flown HOPS each side working in conjunction with two more HOPS on the upstage rail of the front lighting truss, pointing down. 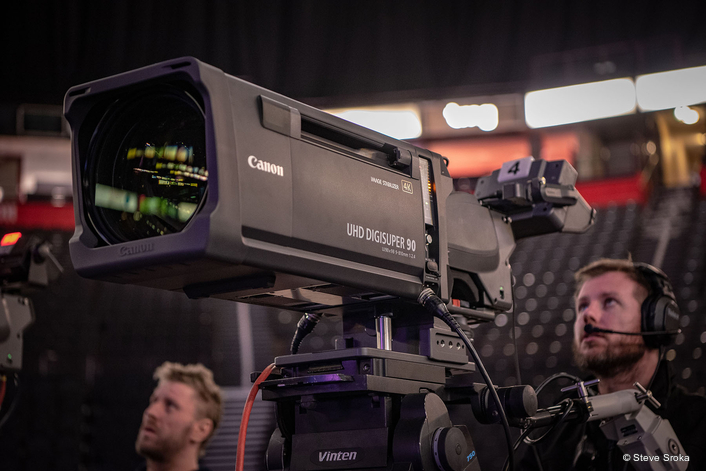 The front monitors were also HOPS attached to the front of the thrust via more custom brackets, and slightly angled up!

Being a musical, the monitoring is loud, especially with multiple cast members onstage.

Alan comments that the gain-before-feedback of the CODA system is “astounding … I have never found another product that is this tolerant”, and in a month of daily shows, they had only one feedback tweak!

The consoles were both DiGiCo’s – an SD10 for Hassane at FOH, Steph used an SD12 for monitors, and Shona utilised a DiGiCo S21 to monitor the RF channels.

The cast sing live to playback with the tracks stored on a fully redundant 16-channel QLab system which is at the heart of the performance. Musical director Andy O’Callaghan and Hass spent considerable time on perfecting the transitions and programming during cast rehearsals at LS Live.

A DiGiCo Optocore network was used to connect and deal with all the track signal routing from the QLab, the FOH and monitor consoles and racks.

The QLab rack was built by Adlib and sat at FOH, with lighting for the musical numbers (not the spoken word parts of the set) timecoded, the tracks were triggered by Mike Summerfield at FOH, upon which the QLab sent timecode into his consoles.

Mike Summerfield is another regular and long-term member of the Mrs. Brown production team, and he created a fresh look but with some concept continuity from the previous tour, and this time was also considering the needs of a lively, action-packed musical performance as well as a side-splittingly funny comedy extravaganza!

“The idea was to keep the feel and basic look of the previous show and when it suddenly bursts into a song, we needed extra ‘WOW’ in terms of lighting and effects, snapping from the intimate sitting-room feel of Mrs Browns lounge to a big open live musical performance … then back again!”

Lighting and video were project managed from base by Jordan Willis who worked as a lighting tech on the last tour in 2017, so he is familiar with the team, and like everyone, loves and appreciates the proper family atmosphere of this highly successful operation. 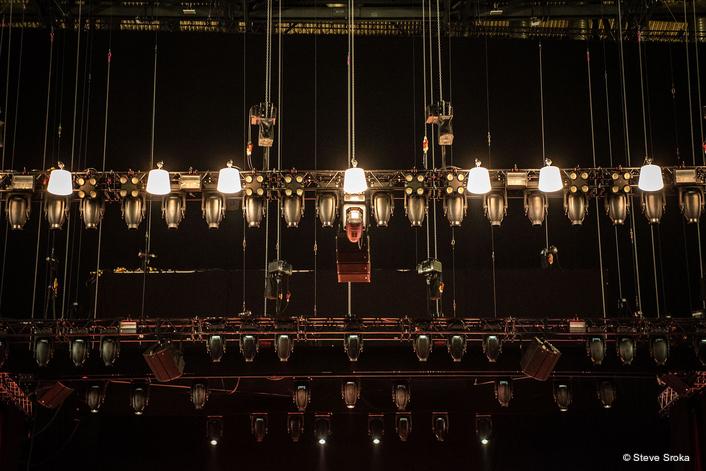 Some of the Lighting used

Video is another essential element for arena comedy – as important as getting clean sound to every seat in the house, it’s imperative that they can also see the action and appreciate the facial expressions and nuances.

Adlib supplied two large IMAG screens each 7.5 metres wide by 4 metres high made up from their Unilumin UPADIIIH5 5.9 mm product, together with a 5-metre-wide by 3-metre-high delay screen of the same surface plus and a four-way camera / PPU package.

The cameras, all Sony HXC-100s, were deployed two at FOH – with the new Canon UJ90 broadcast lenses, and two on stands in the stage wings in line with the edge of the set which were fitted with HD40 lenses.

Mike sent in his lighting plot to Jordan and the team at Adlib’s new HQ in Knowsley, Merseyside, built the rig to his spec.

The lighting design was a re-work of the 2017 tour with lots of extras. The fixture count jumped up from 32 x Martin MAC Viper Washes and 10 Viper Profiles to 38 x Viper Washes and 24 x Profiles. For the extra effects lighting Mike added 14 x Claypaky Stormy LED strobes and 10 Chauvet Strike 4 LED blinders, plus two 32” mirror-balls on rotators and 19 large white lampshades. 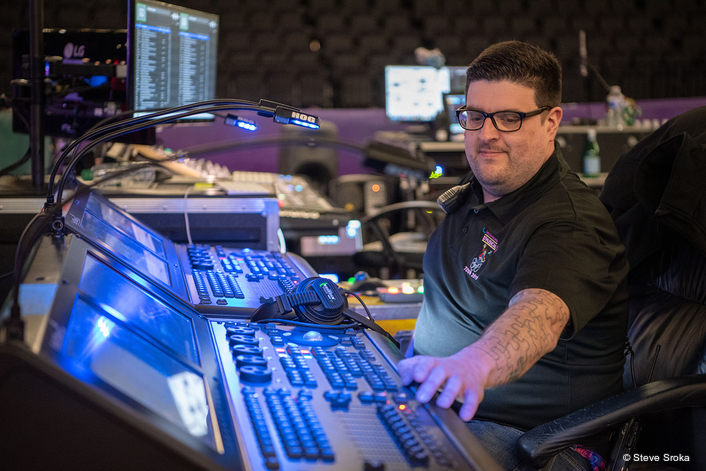 Over stage were three LX trusses - the front at 20 metres, the mid and back at 15 metres and two 10-metre-long side (wing) trusses - with a 15-metre advanced truss slightly out into the audience, all made up from Prolyte sections.

The moving lights were divided between all the trusses.

The Claypaky Stormies were dotted around the advance, front and side trusses, together with the Strike 4s which were on the advanced truss.

For safety and convenience, they utilised a 3-way Robe RoboSpot system, with three BMFL WashBeams on the front truss picking up the principals, which were remotely operated via three separate BaseStations located in dimmer world.

When Mike heard it was going to be a musical, the subject of follow spots immediately came up, and it was the “perfect opportunity to bring some nice new toys on the road” explained Mike on the RoboSpots.

Touring ‘traditional’ follow spots isn’t easy, it consumes a lot of local crew at each gig and can be challenging to keep consistency with the placement and distance, which would in turn effect the cameras delivering the look and texture of the IMAG that is so fundamental to the live show, so “a ground based system was the logical step for us to take”, explained Mike on why they chose to go this route. “It paid off really well and we had the same show every night”.

The two 32-inch mirror balls – each flown on its own small truss – stage left and right were ready for any bling-tastic disco moments.

Far upstage was a 15-metre-wide LED starcloth, and immediately in front of this Adlib provided the motors, trussing and rigging for four custom neon-style LED scenic signs which were commissioned and sourced by production.

Adlib created a rigging solution for the special pendant lights which were fitted with domestic bulbs and scenic lamp shades and suspended on variable length mini-steels – 5 from each of the two side trusses, and 15 - all at the same length - off the advance truss. 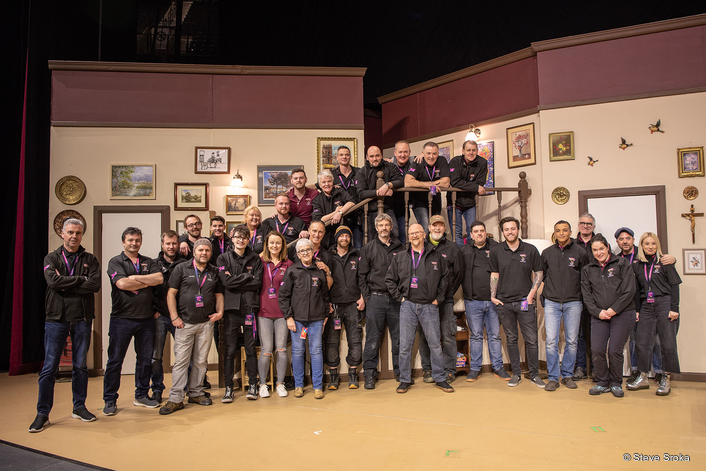 LED tape around the lamps was controlled via the lighting console so Mike could change the colour of the lampshades at certain points of the action, and having these opened the lighting concept and enabled the creation of bigger looks.

Mike operated the show via his Road Hog Full Boar and as mentioned above, also triggered the QLab machine running the music tracks with an Akai MPD218 which sent timecode to his console.

This production set up required very high levels of interdepartmental co-operation especially between lighting and audio, all aided by the full technical requirements coming from one company – which also offered a cost-efficient option to production.

Account Manager Jordan Willis commented: “it has been brilliant for me, firstly working on the actual live shows on the road last time to now project managing, which brings a whole new perspective. It’s great to have those relationships and trust in place from everyone in production, as we all have the same goal – to make Brendan’s shows the best they could possibly be.

The genuine friendship I enjoy with everyone involved makes the whole thing an absolute pleasure.”