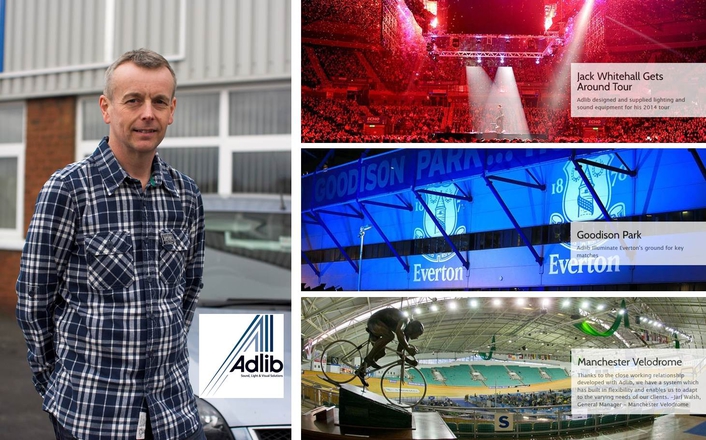 Andy Dockerty: Liverpool based Adlib celebrates a landmark 30 years at the sharp end of the audio production and rental market!
The time has flashed by since Andy Dockerty established the company in 1984, taking  the first steps in building a brand that would grow steadily and diversify to become one of the most successful and respected technical production solutions providers in the UK and internationally.

“Everton won the FA Cup beating Watford 2-0 in the final,” he reminisces about the Orwellian tinted resonance of 1984. At that time the embryonic Adlib was just Andy with a small PA system together with a VW Van that he had gradually built up engineering for local bands whilst working full time as an electrician at a local firm. The original ‘Man-in-a-van’ sound system.

When made redundant from his job and against the backdrop of mass unemployment across the UK, and particularly in the North West, Andy founded Adlib on one of the then Conservative government’s famous Enterprise Allowance Schemes. Of the 325,000 start-ups that the scheme funded, Andy went on to join a few other notable successes  including Creation Records guru Alan McGee, Superdry founder Julian Dunkerton, artist Tracey Emin and the founders of Viz Magazine.

Driven by Andy’s passion for music, sound engineering and the industry he loves, Adlib has grown and blossomed into a dynamic multi-faceted operation, currently employing 90 full time staff and a small pool of trusted freelancers. They are headquartered in large premises in Speke near Liverpool Airport.

It’s built up a formidable respect as one of the best and most competent sound rental facilities and is still driven forward by that same dedication with which Andy started the company.

In addition to sound rental, Adlib now also has very proactive Lighting, AV, Sales and Installation departments as well as a Design division, and is an authorised L-Acoustics and Coda ViRAY distributor.

Recently, the Adlib Speakers name was re-launched to market their very successful own-brand of specialist ‘Made in Liverpool’ speakers – already utilized prolifically for their own projects for over a decade - to international markets.

Defining moments over the last 30 years have been numerous.

2003 was definitely one of them. Adlib won the contract to supply audio to the UK and European sections of David Bowie’s ‘A Reality’ world tour via Bowie’s FOH engineer Pete Keppler. This involved a massive investment in equipment which was a huge leap at the time, but paid off enormously in the long run.

Another highlight is the fact that Adlib has always remained an ‘independently’ owned company. This has kept the management structure streamlined and the decision making process agile and helped preserve its unique atmosphere and approach to business. In thirty years, Adlib has never sold its soul!

Adlib is most definitely a people company and Andy is the first person to salute his key management team – the skills, enthusiasm and characters they bring to the mix - underlining that another high point is seeing just how many of the significant individuals like Marc Peers, who joined the company in its first decade, are still there today.

The directors include Dave Kay, Mark Roberts, Dave Jones, Phil Stoker, Peter Abraham and John Hughes, the ‘youngster’ of the family with a mere eight years of service. “Their dedication and expertise has helped build and shape our reputation for excellence as well as being friendly and accessible,” says Dockerty with huge pride.

Continuing on the people note, Adlib has also developed some extremely productive and fruitful long term relationships with clients and suppliers. “I can hand-on-heart say that this industry is responsible for many of my nearest and dearest friends,” declares Andy.

The company is currently investing heavily year on year – it will be pushing a £million by the end of the May so far, for 2014 alone – to ensure they can offer clients and a diversity of projects the best and the most appropriate technologies.

The company is – and always has been - committed to providing active and practical training opportunities and apprenticeship schemes for young people wanting to learn their craft and have a chance to make a serious career in the technical production industry.

While heading Adlib and driving it in 2014 consumes an enormous amount of Andy’s time, he’s still not lost his first love which is mixing sound. He still keeps hands on the board when possible including as FOH engineer for Texas.

Looking forward to the next 30 years, Andy is really hoping that there will be some more time for him to do less administrating and more live mixing, “I would really like the chance for more time to return to what I was doing when I started it all!”

Adlib has an extremely busy few months ahead, with Liverpool hosting the first International Festival for Business (IFB) for which Adlib is a technical partner to Liverpool Vision - plus numerous regular festivals, a healthy string of tours and plenty of other projects … so we can all expect that some serious 30 year celebrations will come later in the year when everyone there has time to draw breath.