Adlib Brings The Noise to Creamfields 2017 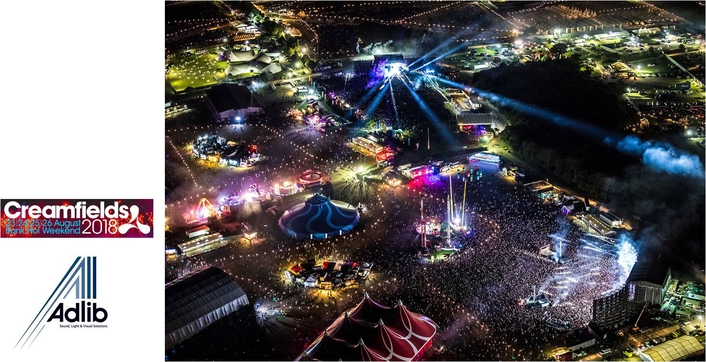 Adlib answered the classic DJ siren call of “Make Some NOISE!!!!”  at Creamfields 2017 … one of the world’s most famous and popular electronic music festivals - supplying sound, lighting and rigging to two main arenas  -  CF03 (Armada / Mega) and CF05 ‘The Curve”  - plus CF10, the all-important VIP and Hospitality area where beautiful people clamour to be.

The four day festival was staged at its regular site on the Daresbury Estate near Warrington. Adlib was working directly for creative production specialist LarMac LIVE, and was delighted to be involved again with the brand that defined the energy and positivity generated by the city of Liverpool with legendary dance club Cream which burst onto the scene in 1992.
On site, the Adlib crews were led by Hassane Es Siahi (Hass) who also designed the audio in CF03 and Adlib’s Kevin Byatt who was project manager over all of the disciplines.

Sounding Off
CF03 (this year co-hosted by Armada and Mega) is a large tent built on a slope presenting immediate topographical challenges in getting even sound coverage. Added to this, the tent skins were swagged - hammock style - over the king poles, creating further reflections, so dealing with the sonic detractions involved conscientious detailing.
Hass has worked as FOH engineer for leading international DJ and superstar David Guetta  for several years and in that time built up an extensive knowledge and understanding of the nuances of dance music and DJ performance, and the finesse involved to make it sound awesome for audience and artist.

Unsurprisingly to anyone familiar with the environment, bass is the key … but we’ll come to that shortly!
The main PA in CF03 comprised 12 a side L-Acoustics K2 hangs … and 32 of the new L-Acoustics KS28 high power subs – a left-centre-right array of these all running in cardioid mode.
The twelve subs on house right (stage left) were stacked in a 4-4-4 configuration, with the bottom elements reversed. 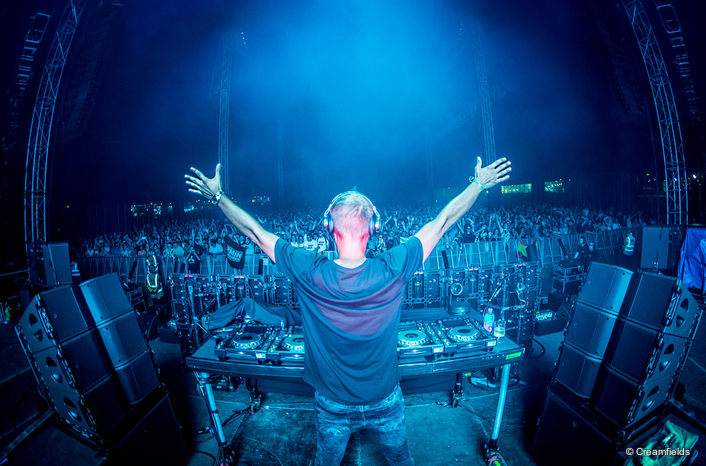 The centre cluster was made up of eight subs in four columns of two - 2-2-2-2 - with the bottoms on the first and the third stacks (when looking from the house) reversed.
The stage right / house left stack mirrored its counterpart on the other side, again with the bottom cabinets reversed.
This proved a winning formula in terms of throwing bass to the back of the 75 metre long space, as Hass explained that it was essential to get the subs physically high enough to create a big wave of low frequencies at the front that self-propels itself down the length of the room.

He chose cardioid mode because of the quantities of KS28 subs and the fact that they needed minimal output sneaking out behind the stage.
The minimal rejection of these new subs however means that they are uber-quiet at the back, so in fact he probably could have used less and gone for a non-cardioid set-up after all, but decided to go with what he knew would work in a venue rocked by some of the greatest names in dance like Armin van Buuren (A State of Trance set), Above & Beyond, Alesso, Duke Dumont and many more.
Four-a-side ARCS II speakers provided front fill, and for the outfield, Hass positioned three KARA a side ground-stacked on flight cases, plus a delay stack on the tent king-poles at the back of the FOH position directly facing the main entrance.

The psychology there was wanting people walking past to be able to hear the DJ perfectly through that entrance gap … before they decided whether to squeeze their way in!
This delay also compensated for any sound interference that might be coming from the open air stage directly opposite across the site.
It was the second time that Hass has designed audio for this tent and he was very pleased with the results. 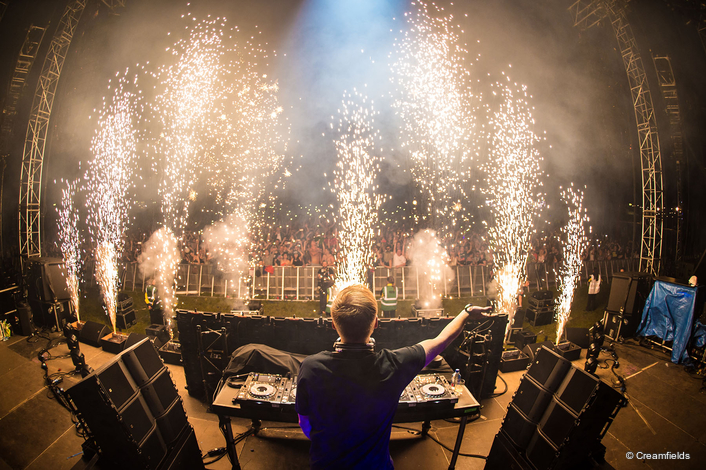 He used a Soundcraft Vi600 console, chosen because it is “straightforward and simple”. Being DJs there wasn’t a need for multiple plug-ins and other magical tricks, “It’s all down to tuning, EQ’ing and controlling the system” confirmed Hass, for which he extensively used the LA Network Manager.
“You have to be genuinely interested in the music to hit the spot with a dance artist” he states, “It’s hugely more than two faders …. What the DJ is playing changes second-by-second, it’s a completely dynamic audio space, and the sound is like any musical instrument ... you have to listen properly to how they are playing it!”
This is one reason why many dance artists will have their own engineers on-board even from an early stage in their careers.

At the stage end, the role of the monitor engineer is equally important to ensure that the artist hears and feels all the right things, because without that, they can’t connect to the crowd and that relationship is right at the core of the electronic music experience - DJs don’t sing or chat to the audience, they build up their rapport entirely through the music..
Hass notes that audiences are also educated in what they want to hear at events, which is a big part of why they are into specific genres of dance music … the subs need to be sweet and strong and the low-mids are also important to bring a good, clean assertive punch.
That’s why it’s so fundamental for the sound to be right!

In CF03 they specified a ‘classic’ DJ monitor set up with two L-Acoustics SB18s per side and three KARAs sitting on top … mixed by Adlib’s Matt Gadsby using a Soundcraft Vi1.

Hass mixed most of the artists on CF03, only Armin van Buuren brought his own engineers. His favourite set of the weekend was Above & Beyond, who headlined Saturday night’s Mega line-up and absolutely smashed it!

In CF05, a Coda AiRAY sound system was spec’d, which has been used before in the space and proved ideal for delivering the clarity, detail, low end and general sonic excellence required for this tent, sponsored by Pepsi Max, which saw high energy performances from Paul van Dyk, Ferry Corsten, Sander van Doorn, Timmy Trumpet, Rob Harnetty and loads more leading and emerging artists. 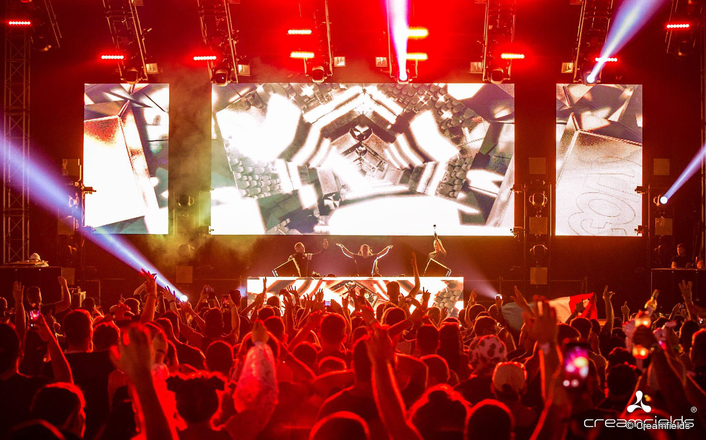 Four ground stacks of six AiRAY cabinets were positioned around the curvature of the arena, two either side of the DJ with another two further out along the wings, ensconced in the LED video panel design that visually defined ‘The Curve’.
Twelve Coda TiRAY were used for infills and 22 subs comprised 10 x Coda SC2-Fs and 12 Coda SC-8s. The DJ monitors were a mix of L-Acoustics dV-DOSC speakers running with 3x15” dV-SUBs for plenty of oomph!
The console was a DiGiCo SD9 and Adlib also supplied a Shure radio mic package, as was the case in the other arenas.

Lighting - Ready for a State of Dance
Lighting and visuals are an equally important part of the technical equation when it comes to creating a comfortable, stimulating, fully immersive dance music vibe, and whether its 8 lights or 800, the positioning has to be perfect, the programming spot-on and the operation skilled and naturally rhythmic.

Adlib’s own Ian Tomlinson – an expert in the genre, and LD for the Swedish House Mafia who trail-blazed the idea of DJs having large and exciting productions to augment their performance - designed lighting for all three arenas in which the company was involved.

In CF03 Adlib’s Tom Webber operated, working alongside crew chief Ian Wood and techs Jon Barlow, Jeff Bond and Chris Little using a grandMA2 full size console for control with a grandMA2 light for backup.
Over the stage a full ground support system was installed by Prism, complete with PA wings, and into the roof section of this, ADLIB flew eight pre-rigged truss fingers of different lengths, all raked, the shortest offstage and longer ones onstage.
In the audience, two 42 metre heavy duty trusses were flown running the length of the centre three of five pairs of tent king-poles which were utilized for cable management. Each pair of king poles was 20 metres apart. Level with the three middle pairs, six 6-metre vertical trusses were flown off single motors in the roof.

Over 200 lighting fixtures were utilised in total in this arena to ensure the stage and the audience areas were really well covered.
Creamfields has a reputation for upping the production values each year and “this year we concentrated on ensuring that there was more audience lighting to add to their overall festival experience” said Kevin.
The lighting included Claypaky Mythos 2s and Stormy LED strobes, Ayrton Magic Blade Rs and Magic Bursts, Martin MAC Auras and MAC Viper Profiles – all dotted around on the pre-rigged fingers and audience trusses. Chauvet Slim PARs provided front light on the DJ area.

The Magic Bursts were rigged to the legs of the ground support, and Mythos 2s and Stormies positioned on the pre-rigged fingers and attached to four vertical trussing towers positioned upstage, all of these surrounding the DJ in a dynamic array of lighting.
Upstage there was one main LED screen flanked by two smaller ones … so strong and powerful lighting was needed to ensure a good balance between the two medias.
Eight Chauvet Strike 4 LED blinders and 28 x Martin Quantum Washes were deployed on the six vertical audience trusses which threw plenty of light and effects around the space.

Atmosphere was kept pumping for the weekend with five machines, two Jem ZR44 smokers, a couple of ProFusion DF 50 hazers and an MDG theONE hazer.
In CF05 James Betts Gray was the main programmer / operator, Jordan Willis was the crew chief and Peter Lea the tech.
The nickname of ‘The Curve’ came from the spherical shape of the tent, which is a 4 king-pole circus style space with a Layher scaffolding system installed by Acorn around the inside edges to provide rigging points for a multiple LED panel sculpture and the lighting design which takes a similar approach.

The shape accentuates the intimacy of the space … enveloping the audience without it becoming claustrophobic. A grandMA light was specified as the main lighting console with an onPC system running as backup.
In between the four tent king-poles four LX trusses were flown in a square formation for audience lighting positions, with the rest of the lights rigged to the Layher structure.
Lights included Claypaky Sharpies and Stormy CC LED strobes, 4-lite Moles, Chauvet COLORband PiX LED battens, Robe LEDBeam 300s – chosen for their small size and punch – Martin Rush MH7 hybrids and a pair of Chauvet Colorado strips for illuminating the DJ.
Serious atmosphere was created courtesy of the combined efforts of two ZR44 smoke machines and two ProFusion DF-50 hazers.

The Hospitality area, CF10 was created from three saddle-span tents butted up together at the apex points, on which Adlib flew an 8 metre circular truss picked up from two points on the ‘eyebrow’ of each stage.
This facilitated lighting positions for Chauvet NXT-1 LED matrix moving lights to highlight the interiors of all three tent spaces … which were white, pristine and begging to be lit!
A small stage was built at one end and on the saddle-span structures around the room were a selection of Rush MH 1 Profile Plus’s, ProLights Solar RGBWs, CORE ColourPoint 2 battery-powered uplighters, Chauvet SlimPARs and ETC Source Four Junior profiles, together with some pipe-and-drape to make it all look neat and streamlined.

The exterior of Hospitality was lit with 400W HQI flood practicals mounted on telegraph poles, and these enabled guests to see where they were going and find their way around after dark.
Kevin Byatt comments, “We always love working on this event – being a Liverpool brand, popular, friendly and very well organised, we are very proud it’s earned its place as one of the best loved dance festivals worldwide.
“We have a great relationship with LarMac Live, and Creamfields always involves a lot of suppliers collaborating and working together, with plenty of inter-company camaraderie and teamwork. I think this is one of the things making it a truly unique festival production phenomenon.”