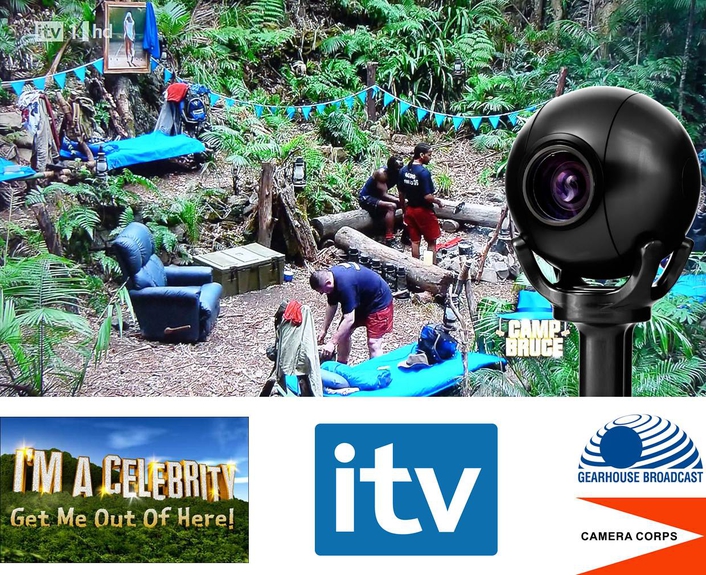 Q-Ball, one of the 75 Camera Corps HD cameras providing round-the-clock video of the camp in the Australian jungle
Seventy-five Camera Corps HD cameras plus a large inventory of remote control systems, motorised mounts and jungle-proof covers are now active in the Australian jungle, covering the 10th series of I'm a Celebrity...Get Me Out of Here! The series is being produced by ITV on a round-the-clock capture basis with equipment supplied by Gearhouse Broadcast.

"Outside broadcasts often involve working in tough environments," states Kevin Moorhouse, Gearhouse Broadcast’s Chief Operating Officer. "High mid-summer temperatures combined with torrential rainfall and extreme humidity make the Australian 'I'm a Celebrity...Get Me Out of Here!' location exceptionally challenging. David Sisson and Steve Lintern from Camera Corps are working with Gearhouse Broadcast staff from October through to December, using remote-controlled cameras to provide round-the-clock video of the jungle camp and walkways. This is the first time the Australian series has been produced in 1080i. Picture quality is so good that you can easily believe you are actually there. The Camera Corps Q-Balls provide excellent daylight and infra-red-illuminated night shots with full control over pan, tilt and zoom. Motor acceleration and deceleration are very precise, allowing camera-angle and zoom ratio to be changed in mid-shot. Q-Ball's sealed housing is ideal for keeping out stray insects as well as moisture."

"The Q-Ball cameras are a mix of black-finished and silver-finished heads," David Sisson adds. "They are being used in various roles including 'coffin-cam' mode where contestants share a confined space with whatever the show hosts choose to send in with them for company. We also have 17 infra-red-capable HD Minizoom cameras, most of these alongside Hitachi DK-H32 cameras mounted on Minishot remote heads. The Minizooms are used primarily for night shots."

'I'm a Celebrity... Get Me Out of Here!' is a reality television series in which contestants compete to become King or Queen of the Jungle. Originally developed in Britain by Granada Television for ITV and first shown in 2002, it is produced by ITV Studios and licensed globally. Viewers vote by phone for a chosen contestant to complete a Bush Tucker Trial and money is raised for charity with a donation being made from every call. The last remaining contestant, after others have been evicted, is declared the winner.

Gearhouse Broadcast Deliver I’m A Celebrity... Get Me Out of Here! Technical and Production Facilities
Camera Corps Makes Television History at
Camera Corps Q-Balls Circumnavigate the Globe with