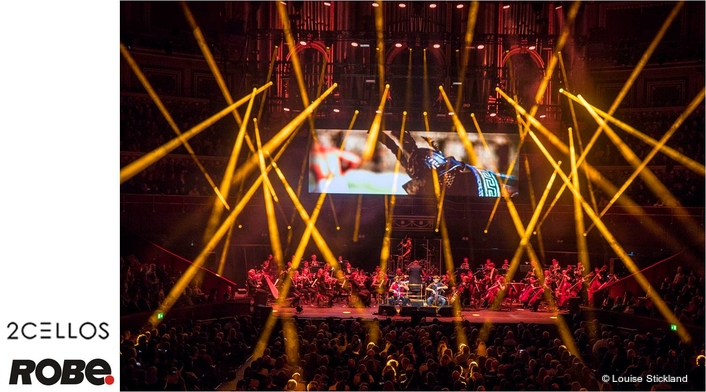 Robe MegaPointes are making their presence felt on the current European tour by Slovenian / Croatian duo 2CELLOS - Luka Šulić and Stjepan Hauser – with another jaw-dropping lighting design by Crt Birsa.

The kit, including the 24 touring MegaPointes plus another 8 for the London show at the Royal Albert Hall, was supplied by Colour Sound Experiment who were one of the first UK rental companies to place their order immediately after Robe’s newest moving light was launched in September. 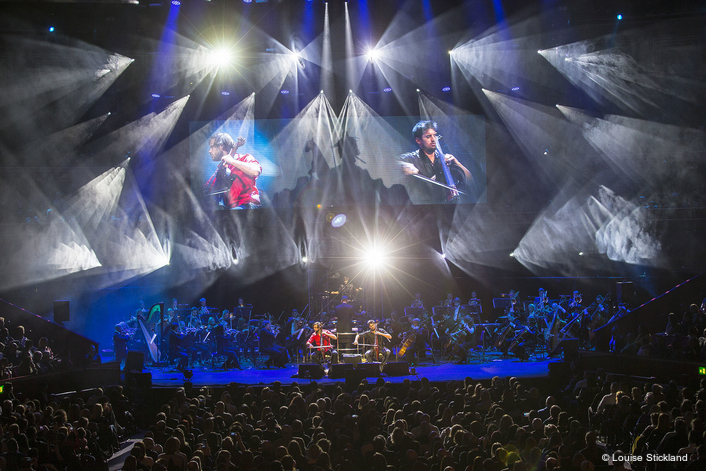 For the London gig, 2CELLOS expanded their standard 12 piece touring orchestra including drummer Dušan Kranjc, and played with the Royal Philharmonic Concert Orchestra, bringing a new richness to their unique crossover style, which encompasses multiple musical genres reimagined with cello at the core.

Crt is a big Robe fan, and the brand is always his first choice of moving light, so he was very excited to be putting the MegaPointes through their paces on a tour. “It’s great to use new technology and I really appreciate Colour Sound making them available”.

The fixtures were literally new and went straight out on the tour immediately after delivery to Colour Sound’s west London warehouse. Crt’s lighting design also utilised 20 x Spiiders and five BMFL Spots, together with a selection of 2 and 4-lite blinders and strobes, so Robe were the only moving lights, and the three types of fixtures were rigged across three 14 metre touring trusses. 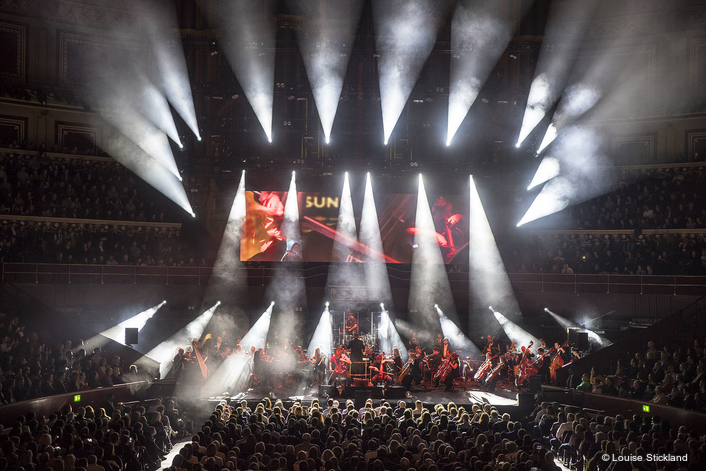 Anyone going to a 2CELLOS show expecting the decorum of an orchestral performance would have been shocked … just like the Baroque audience in one of their most-watched viral You Tube videos, ‘Thunderstruck’!

While the classically trained artists first enthralled the audience with their take on some well-loved cinematic and TV theme music from their ‘Score’ album, they were clearly itching to get onto the louder section of the show, where they truly rocked the RAH, rambunctiously showcasing some of AC/DC’s finest! This was complete with Stjepan Hauser donning red flashing electric devil’s horns and charging manically around the stage brandishing his cello … as fans danced in the aisles and jumped in their seats!

Angus Young would have been proud!
Crt has been working with 2CELLOs for three years and experienced their career trajectory go totally supersonic. They are hardworking, in demand as live performers, and for the last few years have played across all continents. They are very down-to-earth as people, and mainly leave him to come up with ideas and suggestions on the lighting front. 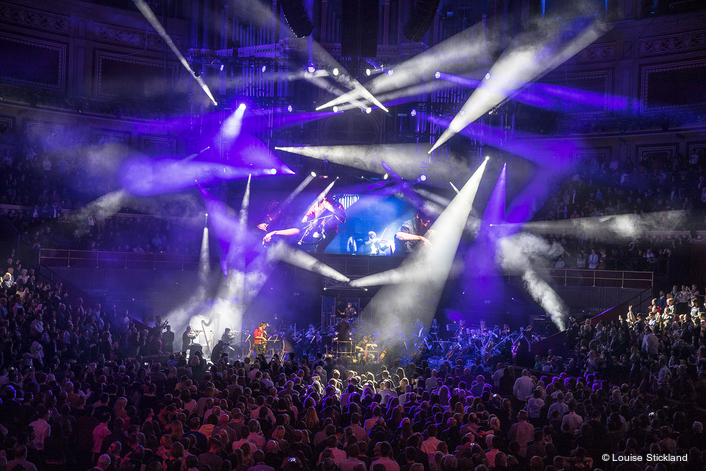 His challenge is capturing the many styles and huge dynamic range of the set, and being ready to enhance anything from a refined filmic theme or an epic stadium rock song … with the unique 2CELLO treatment.
This touring rig is a lightly scaled down version of that used for another arena tour earlier in the year, and as always, Crt was on a mission to create the best lighting show possible without busting the budget.

It was an expedient amount of moving lights for an arena tour, but Crt was greatly aided by the power and features that the MegaPointes brought to the bigger picture.
“They are fantastic lights and worked really beautifully alongside the Spiiders and the BMFLs which provided the key-light,” he stated.

“From now on, I do not need a “beam” fixture anymore. Having MegaPointes and a good wash fixture in the rig can cover a lot of situations where both Spots and Beams are needed,” underlined Crt.
He likes the colours, the streamlined mixing and the smooth dimming amongst other features, and he used the MegaPointes extensively but without being too cheesy or clichéd when it came to effects! The most important task for lighting was that it carefully and respectfully harmonised with and underlined the music. 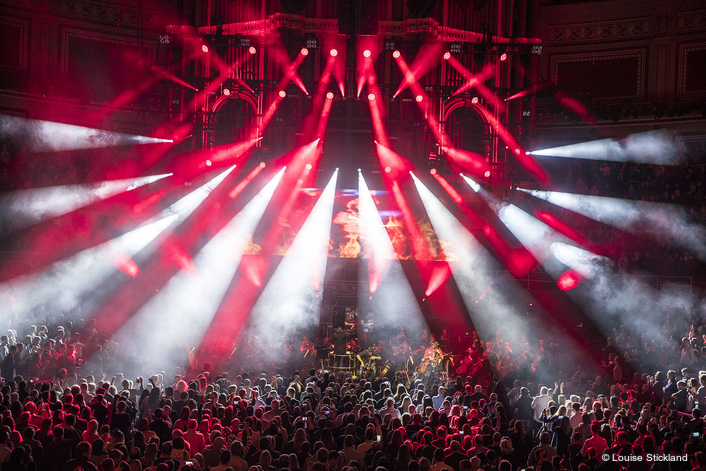 The MegaPointe’s 8-sided prism was an immediate hit as a useful tool, but that was just the tip of the iceberg,
“The gobos are outstanding and the new prisms are awesome,” he stated, also liking the fact that the six prism effects are on two different wheels so they can be overlaid and combined giving rise to “some very complex and intricate 3D aerial effects”.

Crt is an ultimate exponent of minimalist lighting and neither is he big on gratuitous movement cues, so for the first half of the set he created plenty of gorgeous, big, sumptuous largely static looks with occasional bumps and accents in tune with the relaxed ambience of this part of the performance.
Full unadulterated rock-out mode followed for the second half, which he relishes along with the band!

“When it’s an AC/DC or Rolling stones track, then the show needs to be a classic ‘big rock show’, supporting the music and putting out that specific vibe and energy,” he says, for which the strobes and blinders played a vital role.
He has used his own ChamSys MQ80 console to run the lights on the tour and once again worked closely with 2CELLOS’ video director, Zaor Kolar. 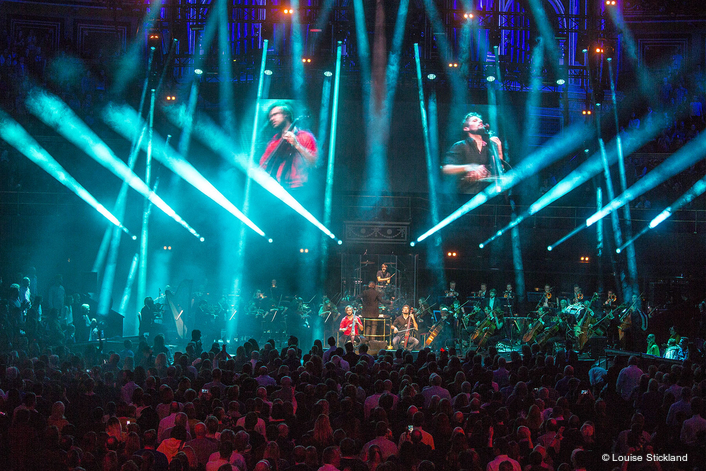 Crt enjoyed working in the prestigious environs of the Royal Albert Hall, although it was a pressured day for him and his Colour Sound crew who were chiefed by Kester McClure with an extra truss of lights to be accommodated and the three touring trusses all having to shift positions due to the central PA cluster position. So there was plenty of extra programming to fine tune everything.
To complete all the outstanding looks he also utilised the RAH’s ambient house lighting, which consists of many Robe PARfect 100s and other LED fixtures.

All of this paid off as everyone delivered a vibrant, colourful and hugely memorable show for the band - and the MegaPointes – made their debut in this premium UK venue … which also features a substantial Robe house lighting system!