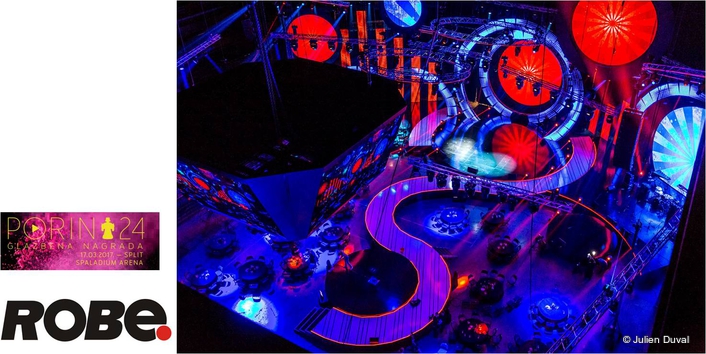 The Spaladium Arena in the stunning Croatian coastal town of Split was the venue for the 2017 Porin Music Awards (AKA 'the Porins'), a glamourous, high profile evening which honours the achievements and talent of Croatian artists across a diverse mix of genres and 30 categories and is broadcast live on the national HRT network.
Lighting designer for this year was HRT's Marko Foretić who chose to work with a moving light rig of over 160 Robe fixtures, supplied by one of the leading Croatian rental companies, Promologistika. He worked closely with Promologistika's Miro Hrg who designed the set and video elements.
Marko's ideas for the lighting were developed following in-depth conversations with Miro and the event's director, Danko Volarić.

The set was based on a series of circles – originated from the idea of spinning vinyl records – six round trusses of different sizes were flown and filled with either LED screens or projection surfaces and the main and B stages were connected by a stylish S-shaped runway.
Once they had established optimum positioning for the trusses based on the shape of the stage, size of the hall and other parameters like the position of tables for the nominees and the audience seating, he started deploying lighting fixtures.
The Robe count was 58 x Pointes, 34 x MMX WashBeams, 24 x LEDWash 600s, 24 x BMFL Spots and 20 x Spiiders. 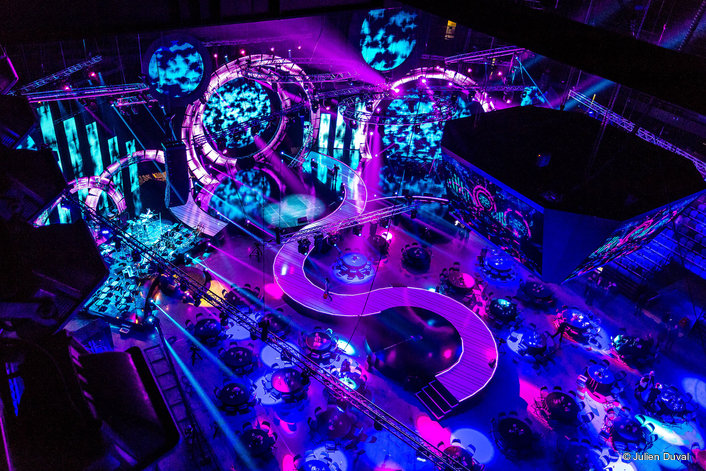 Sixteen Pointes were arranged around the set on the deck with the rest distributed across the circular and other air-based trusses, and they were utilised for powerful and eye-catching effects that they do so well.
The BMFL Spots were rigged upstage where they produced super-bright looks on-stage as well as lighting the audience and musicians.
Marko thinks the BMFL is a great device because of the sheer range of creative possibilities, “from the beautiful gobos to the very strong fat beam, numerous features on this unit really impress me” he declared.
The MMX WashBeams were placed unobtrusively on the circular ramps above the stage and used for aerial eye-candy to compliment and support the Pointes. 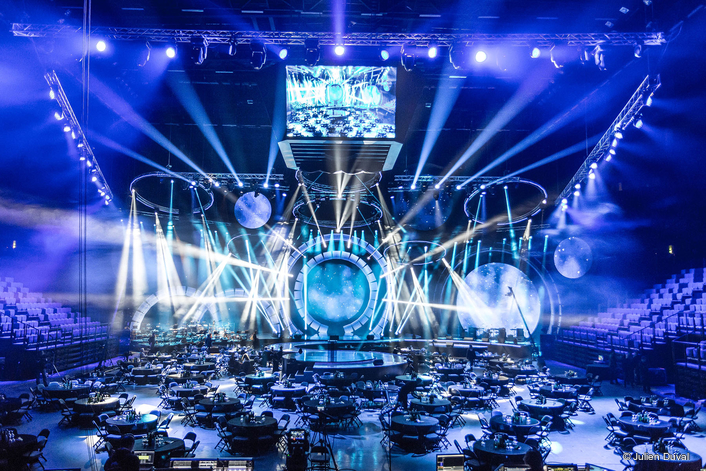 For the first time, he tried Robe’s new Spiider wash beam on a major event, which proved excellent for lighting the room and front washing the audience. He enthusiastically reports being “very satisfied with its strength, the amazing colours and the fact that it is easy to use. I got everything I wanted from them”.
He thinks the flower effect is “fantastic” but on this occasion, it wasn’t effects that he needed.
Marko, Miro and the rest of the creative team collectively decided on the content for the screens and projection, and many of the lighting colour mixes took their lead from the video footage “As these (video feeds) were all abstract, creating a harmony and a fluidity between the colours and the lights was essential” reports Marko
Lighting and video playback was all run through an M6 controller programmed and operated for the show by Branimir Vorberger 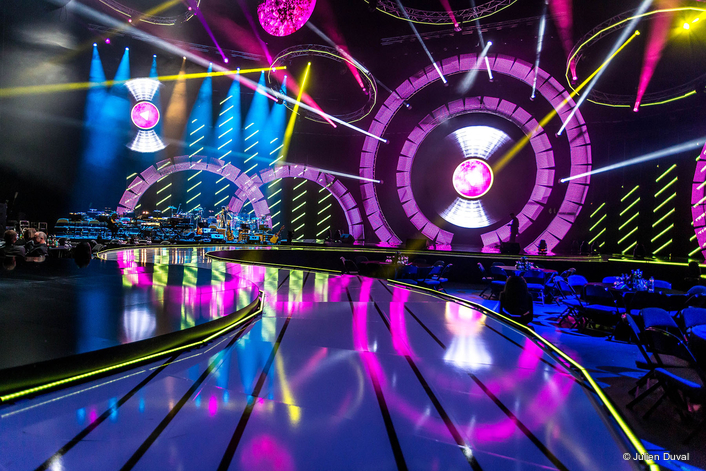 The biggest challenge, Marko recalls is - always - the short time period allotted for technical preparation and programming the whole show, which entails a lot of kit being installed and realising a complex design.
However the hard work all paid off  … as the results were another stunning Porin event and an ambitious production to be remembered. Promologistika delivered the full production including staging, rigging, audio and video.
The event usually shifts locating every year, keeping everyone fresh and on their toes together with the excitement of live TV which always brings that extra resonance.
Marko sees Robe moving heads, especially Pointes, being used increasingly on HTV shows, and others on which he’s personally worked and used them include The Voice of Croatia
He also thinks that, right now, Robe “is among the best lighting equipment available and it is always a pleasure to work with the brand”.

Marko Foretić started working with HRT as a lighting designer and DoP (director of photography) 20 years ago, after finishing his studies at the Academy of Fine Arts in Zagreb. Since then he has been involved in lighting numerous shows and events of all types in many locations … including at least five Porins.

A Little Night Music for Robe at RADA
A Lucid Decision to Buy Robe
A Pointless Achievement For Robe LEDWash 600s!