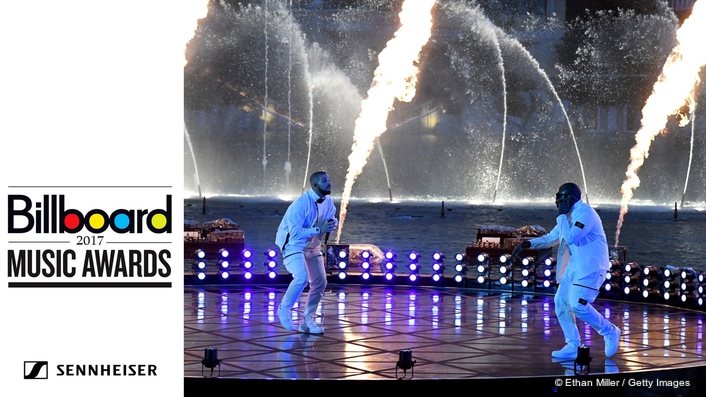 The T-Mobile arena in Las Vegas was packed during the 2017 Billboard Music Awards, for a star-studded evening punctuated by riveting performances from the music industry’s top contemporary talent. Drake, Beyoncé, Blake Shelton, Camila Cabello, Miley Cyrus, Céline Dion, Bruno Mars, and Nicki Minaj were among the artists to grace the stage with gripping renditions of their hits, all using Sennheiser wireless systems.

Nicki Minaj opened the show singing through a Sennheiser SKM 5200 transmitter, coupled with an ME 5005 capsule, for a medley that included her single “No Frauds” and a special guest appearance by Lil Wayne. After that, it was all digital — with former Fifth Harmony member Camila Cabello utilizing her Sennheiser Digital 6000 series wireless for the live debut of her solo singles “I Have Questions” and “Crying in the Club.” Miley Cyrus performed her country-tinged comeback single “Malibu” live for the first time as well, utilizing her new Digital 9000 wireless system.

Céline Dion then took to the stage to reprise her groundbreaking hit, “My Heart Will Go On", from the movie Titanic, in honor of its 20th anniversary. She utilized a Digital 6000 wireless system to deliver an inspiring rendition of the classic tune. The digital wireless from Sennheiser continued as Bruno Mars, hot on the heels of a series of show-stopping awards show performances, delivered a passionate performance of his latest single “Versace on the Floor” on his own Digital 9000 wireless system.

But it may have been Drake who stole the show — not only for winning 13 awards during the evening including "Artist of the Year", but also for delivering a marquee performance of his single “Gyalchester” from a stage in the middle of the fountains at the Bellagio hotel. Relying on his new Sennheiser EM 6000 wireless receiver paired with an SKM 9000 transmitter and MD 9235 capsule, Drake’s performance was as captivating visually as it was sonically, a feat only possible with the power and reliability of Sennheiser digital wireless.

Conveniently positioned within the receiver rack, the modular L 6000 charging unit recharges up to eight transmitter batteries. The four modules can be chosen according to the required battery type – BA 60 for the handhelds and BA 61 for the bodypacks

For Drake’s sound engineer Demetrius Moore, the sound and rejection of the MD 9235 combined with the durability of the SKM 9000 transmitter and the reliability of the EM 6000 receiver were the recipe for success for this unique staging. “The wireless had to be reliable the way this was set up,” Moore said. “The man was out on an island in the middle of that fountain, so there was no way to get to him if something went wrong.”

Fortunately, Moore was already familiar with the performance of the EM 6000’s Long Range Transmission mode from his use of the Digital 9000 system, from whence this functionality originates, from touring with Drake over the last two years on that system. “On tour Drake loves to perform in the crowd, 100 feet away or more at times, and we’ve never had an issue,” he said. “In this case he came in all the way from the Bellagio loading dock to get to the stage and as soon as he was out the door we had signal.”

Reliable in Any Environment

Past experience also made Moore confident that the SKM 9000 transmitters could hold up to some moisture amidst the roaring fountain. “We were using the SKM 9000 sticks on the Jungle tour, and in part of the show there would be a downpour of rain,” he said. “We never had a problem because the durability of the SKM 9000 is so good. Some mics will cut out if you drop them hard or something, but with these you just pick it up and keep going.” With a second transmitter and capsule hidden on stage and a second transmitter on hand, Moore had plenty of redundancy even though he was confident he would not need it. 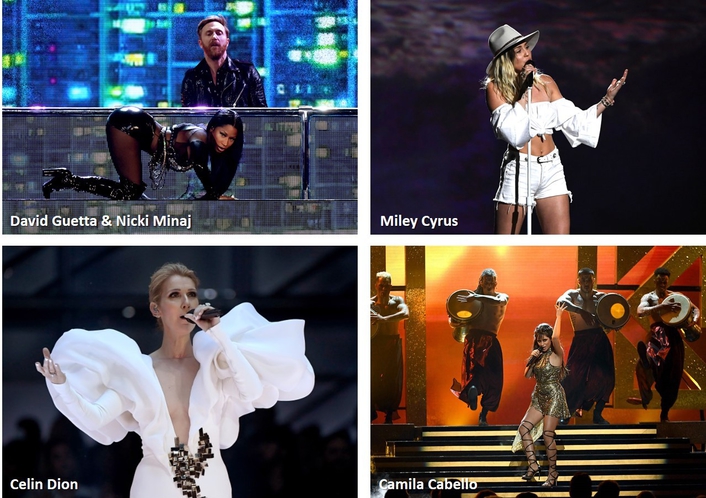 Camila Cabello, Miley Cyrus, Céline Dion, and Nicki Minaj were among the artists to grace the stage with gripping renditions of their hits, all using Sennheiser wireless systems

Great Sounding Vocals and Nothing Else

When it came to capsule selection for the event, off-axis rejection was a priority and the MD 9235 delivered. “We did a test with the capsule to see how much sound from the water bursts it would pick up,” Moore explained. “The rejection was great. Nothing overpowered the vocals, not even the pyrotechnics.” Moore also appreciates the mix-ready sound the MD 9235 provides on Drake’s voice. “It picks up the natural quality of his voice,” he said. “I’m not EQing a lot to get it. It’s a clean sound and even flat it sounds good.”

The result was an unforgettable live music moment that capped off an exciting evening and banner year for Drake. “It was definitely a major look, it sounded great, and everything went flawlessly with the wireless gear,” Moore said.

Audio specialist Sennheiser is one of the world’s leading manufacturers of headphones, microphones and wireless transmission systems. Based in Wedemark near Hanover, Germany, Sennheiser operates its own production facilities in Germany, Ireland and the USA and is active in more than 50 countries. With 19 sales subsidiaries and long-established trading partners, the company supplies innovative products and cutting-edge audio solutions that are optimally tailored to its customers’ needs. Sennheiser is a family-owned company that was founded in 1945 and which today has 2,750 employees around the world that share a passion for audio technology. Since 2013, Sennheiser has been managed by Daniel Sennheiser and Dr. Andreas Sennheiser, the third generation of the family to run the company. In 2015, the Sennheiser Group had sales totaling €682 million.