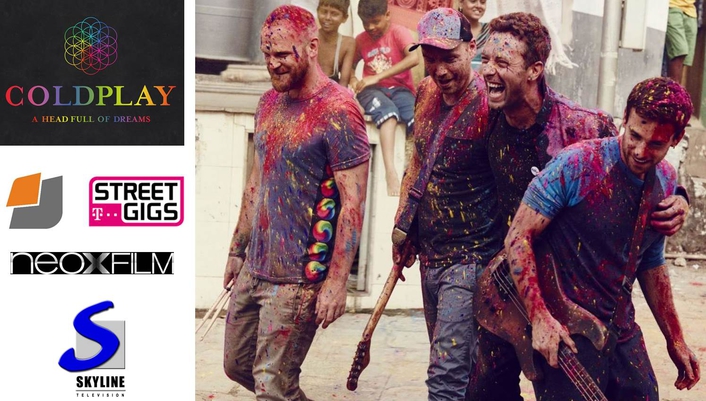 On December 8, 2015 the German TV viewers who didn’t switch channels during the commercial break were rewarded with a special commercial: at prime time, precisely at 8.13 p.m., the Telekom switched to Coldplay’s Street Gig in Offenbach, Germany, on eight of the highest-rated German private broadcasters – in time for the performance of their new single “Adventure Of A Lifetime”.

Additionally to the on site concert experience at the Capitol in Offenbach and to the numerous live commercials on television, the concert could also be followed via the live stream on YouTube, Facebook and Twitter – for free!

The broadcast of the German premiere of the new album “A Head Full Of Dreams” and the only Coldplay concert in Germany in 2015 was carried out by the production company Neoxfilm on behalf of 2Bild GmbH in cooperation with the technical service provider TV SKYLINE. 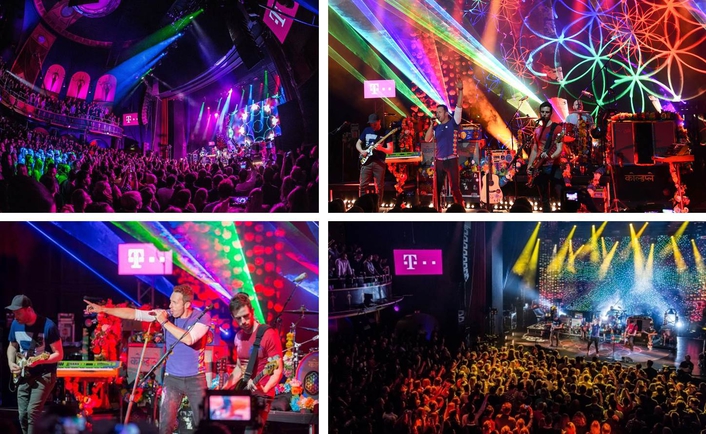 To optimally reproduce the event for the viewers in front of their TVs, computers and portable devices, a total of 10 Ikegami HDK-97A camera systems, a crane and an e-dolly were deployed. The live production of several streams and the digitisation of eleven different signals for the following postproduction was carried out by the TV SKYLINE team inside its OB truck Ü7, which was inaugurated in 2014. The Ü7 accommodates mobile editing and graphics and – thanks to its flexible layout – offered enough working space for the high number of editors and technicians, also from additional third-party users. For the digitalisation of the signals TV SKYLINE relied on the new 12-channel EVS XT3 server. 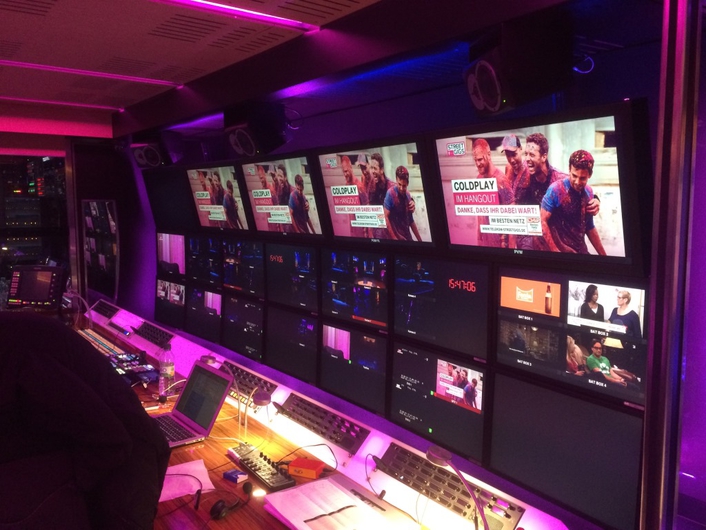 The small concert venue Capitol in Offenbach quickly became cramped due to the stadium band’s density of technology – including a 10-metre wide and four-metre high LED screen. Director Schütrumpf therefore opted for the compact e-dolly version from TV SKYLINE, which can also accommodate an Ikegami broadcast camera thanks to a GENTLE:MOTE remote head. Two pumps were additionally placed on the right and left of the rail. With its vertical motion it ensured that the band’s dynamics were perfectly captured on film. The sound was multi-track recorded by Peter Brandt Remote Recording and mixed live by Rik Simpson, Coldplay’s Sound Engineer.

On behalf of 2Bild, the production company Neoxfilm met all of the production profile’s high demands regarding television technology and directing. Additionally to the live stream on Facebook, Twitter and YouTube these included a Google Hangout as well as simultaneous live commercials on all eight private broadcasters. Additionally to the concert, the band made itself available for a Google Hangout, where fans could speak with the band members in an interactive interview chat using their own webcams.

In close consultation with Ben Miles, the band’s Visual Producer, numerous cameras and their operators were integrated into an on-site communication system using dual connections and specifically programmed intercoms. This way the operators received both the most important cues for the broadcast and for the breathtaking visuals of the show.

Branded content, which was produced especially for the stream, was additionally shown for example on the LEDs. To have as much material available as possible for TV station Prosieben’s Coldplay special programme post production, the director selectively added these branded signals to the stream. This programme was shown in excerpts during the final of the German TV show “The Voice of Germany” and broadcast in its full length directly after the show.

Marc Schütrumpf, director of the TV production and owner of Neoxfilm, has been involved in the broadcast production of the Telekom Street Gigs since the very first Telekom Street Gig with Billy Talent in 2007. Since then he has realized over 50 further Street Gigs – for example with Deichkind, Mando Diao, Fanta4, Depeche Mode, Linkin Park, Placebo, Cro and Ed Sheeran. Marc Schütrumpf: “This Street Gig was a special production not only due to Coldplay’s huge reputation but also due to the complexity and the requirements set for the audiovisual usage. A lot has changed since the first Street Gig in 2007 with Billy Talent. What started as a classic one-way live stream is now a multi-tracked production in which the synergies of TV partners, social networks and live web portals are interlocked and optimally used.”

The production company Neoxfilm realises TV live entertainment for its customers from the music, culture, fashion and industry sector. Neoxfilm has also made itself a name in the cinema segment by implementing numerous live events with Keane, Cro and Laura Myula as well as high profile classic events. Neoxfilm offers the full range of demanding, camera technological services and ensures the realisation of complex production demands. The wealth of experience gained during over 50 Telekom Street Gigs and numerous live DVDs naturally flow into each complex production. In this case, the challenge was to unite the band’s high demands regarding their lighting and stage design with the diverse utilisation requirements of the TV station and the live streams as well as the tightly packed TV operation.

Robert Kis, Managing Director at TV SKYLINE on Neoxfilm, commented: “The challenges set for the TV production were very extensive and required a very close and trusting cooperation with all groups. Marc is one of the most experienced directors in the music live segment and thanks to his experience especially with numerous live broadcasts on the big screen he can see exactly which technology can best be implemented in the venue in question. Additionally, he is extremely well prepared and has a very concrete idea on how each venue can optimally be equipped with perspectives. In the last years of our joint collaboration the production company Neoxfilm has developed extremely well. With increasingly complex and international music productions with unique artists we have grown together and have continuously expanded our portfolio so that today we can benefit from a large common wealth of experience, from opera to rock and pop concerts as well as fashion events, beauty contests, festivals, open-airs and DVD productions.” 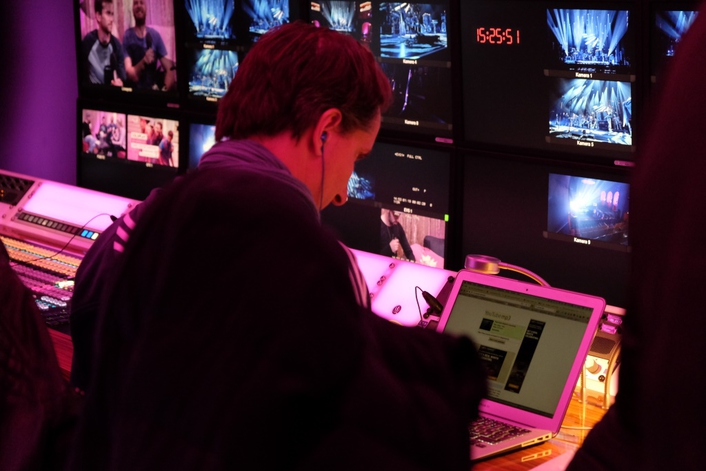 For 25 years TV SKYLINE has played an important role in the outside broadcast industry in Germany. Active worldwide and offering the latest HD, 3G and UHD broadcast technology, TV SKYLINE ensures top quality for its customers from the fields of sports, show, music, event and industry. TV SKYLINE is additionally one of the world’s leading producers and suppliers of special-purpose cameras, of which for example 180 systems were deployed during the football world cup in Brazil. Own studio operations as well as capacities in the field of digitalisation and postproduction complete TV SKYLINE’s service portfolio.

Marc Schütrumpf on the cooperation with TV SKYLINE: “We have worked together very successfully with TV SKYLINE for over ten years both nationally and internationally. The reason for this is that in my experience TV SKYLINE is the largest, independent OB truck provider in Germany and can therefore react in the most flexible way to all the requirements that the markets presents to us. With their two new large OB trucks Ü7 and Ü8 and in combination with the flight pack, smaller OB trucks, 35mm chip cameras and a lot of special-purpose camera proprietary development we can develop and realize optimal concepts for nearly every enquiry.”

The Telekom Street Gig was surely also a new experience for Coldplay and band leader Chris Martin as they usually play in front of thousands of fans in sold-out venues and the Telekom logo and the colour magenta are not part of their usual lighting show. 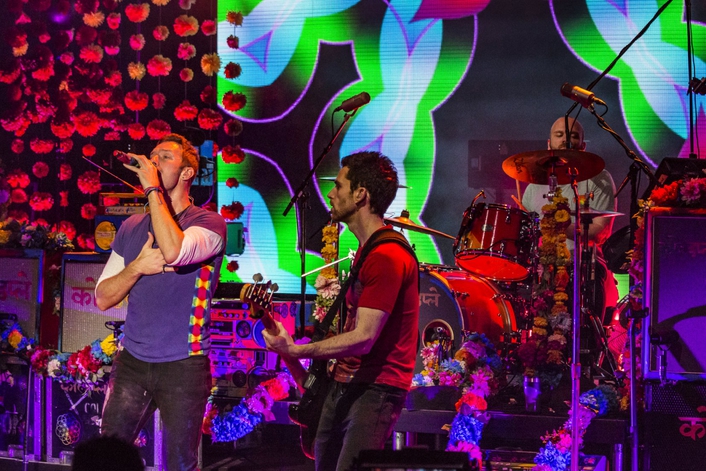 For the Telekom however this was not the first experience with live marketing. For example, commercials had already been produced during Cologne’s Carnival and broadcast on the same evening last year. Additionally a live commercial was broadcast from the Telekom Street Gig with German singer Adel Tawil in August 2015.

The large media attention that the concert received on different platforms confirmed the Telekom in this marketing strategy: „Together with Coldplay the Telekom was successful in creating a live event that delighted the whole of Germany digitally“, says Philipp Friedel, Head of Market Communication Telekom Germany. Already shortly after the announcement of the event, fans expressed their trepidation online, hoping to win one of the sought-after tickets, shared their joyful anticipation with their friends and commented on the show. This was “interactivity entirely in the spirit of our brand promise ‘experience, what connects’,” commented Friedel.

And the resulting viewer numbers will surely make competitors jealous: According to the Telekom, the Street Gig was viewed live by 12 million fans. Despite its broad coverage, however, the event was the most exclusive live concert that was played by Coldplay 2015 in Germany, with only around 1,200 fans experiencing the show live in the Capitol in Offenbach. 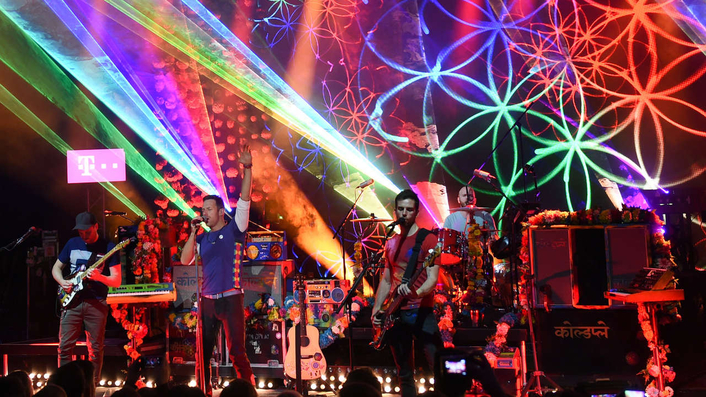