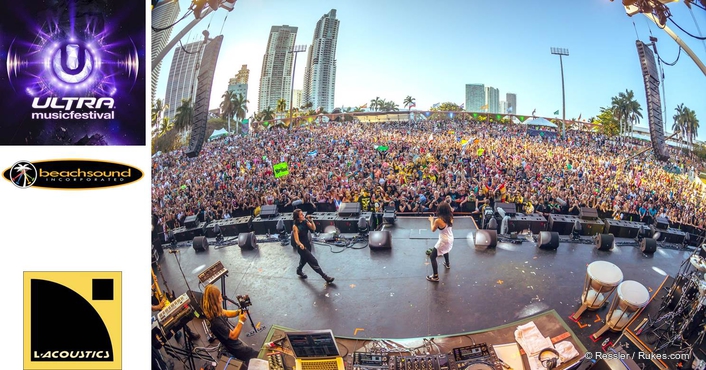 Krewella performing on Ultra Music Festival’s Live Stage, which featured a full L-Acoustics loudspeaker system
“Hot, hot, hot!” That’s what you get when you put the Ultra Music Festival in Miami during Spring Break. But “cool” is the sound you get when an artist lineup that includes EDM legends like Krewella, Bassnectar, Porter Robinson, Die Antwoord, Big Gigantic, Chromeo and Gorgon City performs onstage through an L-Acoustics K2 line array sound system.

Ultra Music Festival 2015, which took place Friday to Sunday, March 27 to 29, drew thousands of music fans to Bayfront Park in downtown Miami, which has hosted the event since 2012. But not since the festival debuted in 1999 has the sound been this good. “We’ve been doing the Ultra festival for a long time and have become very familiar with what a system needs to be able to do this kind of show right,” observes Andre Serafini, founder and president of Beach Sound, the Miami Gardens-based sound reinforcement provider for Ultra over the past decade. “Bayfront Park can be a challenging venue for this kind of music, but the L-Acoustics systems handled it without a problem, and even overcame some of the venue’s special challenges.” 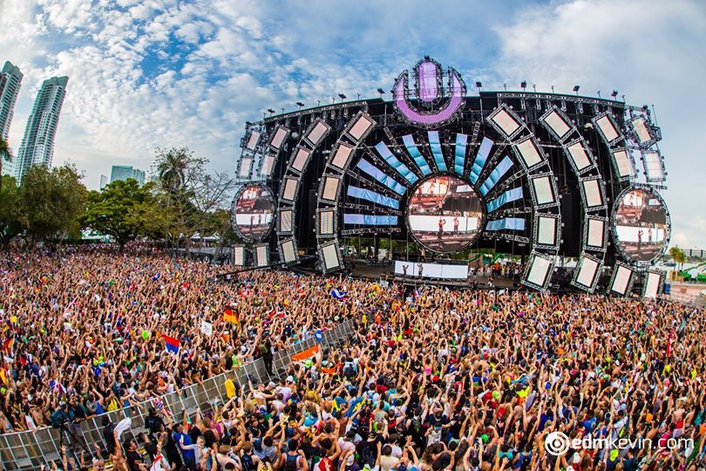 Those challenges included keeping the sound for each stage contained within its area and avoiding overspill into nearby stages. For the Live Stage, Beach Sound assembled a K2 sound system whose main array consisted of 24 K2 enclosures flown 12 per side.

“The K2 has very precise, incredibly accurate off-axis performance, which enabled us to keep the sound on the crowd and away from any of the other nearby stages,” Serafini explains, noting that they used L-Acoustics’ Soundvision 3D acoustical simulation software to precisely map out the sound field. “That kind of predictability is critical for a loud outdoor show like this.”

Atop each main array were four K1-SB high power subwoofers per side. “Flown subwoofers were the key to being able to overcome the unique bass null that was created by this sort of concrete moat area in front of the stage,” he says. “It was an architectural challenge that we were able to overcome with the right speakers.”

Along with a total of 32 SB28 stacked subs, the Live Stage had all the low end it needed and then some. In addition, two ARCS II constant curvature line source loudspeakers were used as side fills under two SB28 subs per side; six ARCS Wide enclosures were deployed as front fills; and, finally, 24 Kara enclosures were used for outfills. 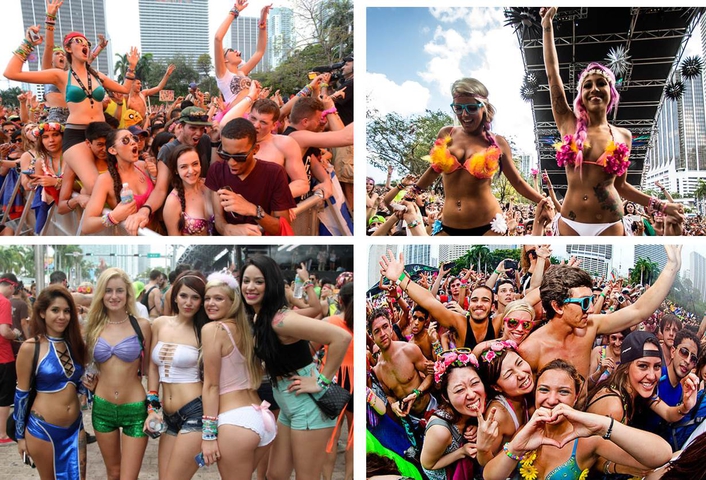 L-Acoustics speakers, such as the SB18 subs, were found as part of systems on all of the stages at Ultra, but it was the K2’s first star turn as the Live Stage PA, and Serafini says its performance was magnificent. “It had the power we needed, but it was also a beautiful-sounding PA system,” he says. “That’s the word that comes to mind first: beautiful. It’s a sound you never get tired of hearing.”

About L-Acoustics
Founded in 1984 near Paris, France, L-Acoustics is a leading manufacturer of turnkey solutions for the professional sound industry. With 250 team members, 20 percent of whom are dedicated to R&D, L-Acoustics is present in over 75 countries either through subsidiaries or via a network of certified distributors or providers.Recognized throughout the industry for pioneering the modern line array, L-Acoustics offers a total system approach for both the touring and fixed installation markets, and a product line responding to the needs of venues from the most intimate club to the grandest arena. L-Acoustics sound systems can be heard in places like the Hollywood Bowl, the NBA Houston Rockets Toyota Center, or the Philharmonie de Paris. L-Acoustics solutions have been used at five of the world’s ten top-grossing festivals*, the London and Sochi Olympics, and on the Justin Timberlake 20/20 Experience World Tour, among others.