“Flexibility is key”: grandMA2 goes along with Harry Connick Jr. 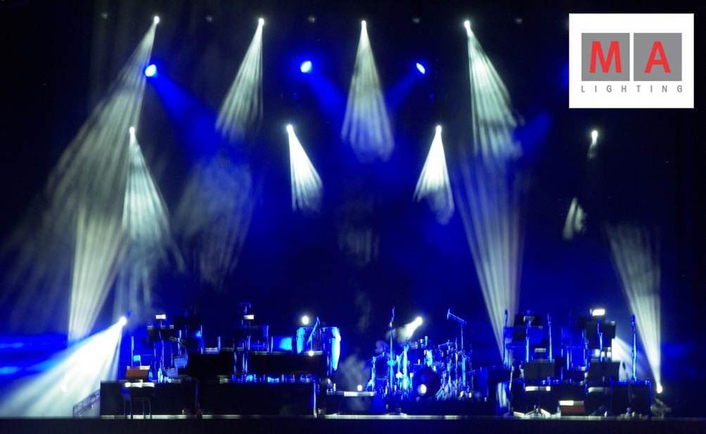 The complement of fixtures used for Connick’s Broadway performances included Martin and Vari*Lite Moving Lights
The grandMA family of consoles demonstrated their versatility when lighting designer Tom Halpain selected them for multi-Grammy Award-winning Harry Connick Jr.’s current US tour which included a sold out 15-performance Broadway concert engagement, his first in 20 years.

The “Your Songs” tour is crossing the world in support of Connick’s eponymous album released last fall. He brought the tour to Broadway’s Neil Simon Theatre in July where the last two performances were recorded live for television.

Halpain, who has worked with Connick on tour since 2003 and has an extensive credit roster of tours with other artists plus TV shows and special events, began the tour with a grandMA full-size then migrated to the grandMA2 full-size when vendor MAS Lighting acquired the new model. “The grandMA was a great console, but we fell in love with the grandMA2 when we had to reprogram the show for Broadway,” Halpain explains. “And now we’ve taken the grandMA2 light out for the rest of the tour.”

Halpain, who also serves as lighting director and programmer for the tour, notes that Connick has no set list for his concerts. “He hates being confined. We know the first song, then he calls them out as he goes along. We need a desk that’s flexible so we can easily jump from song to song.”

To accommodate Connick’s on-the-fly approach Halpain treats each of the artist’s songs as its own page. “He calls them out, I hit the page and away we go. We can have eighty active songs on a tour, and I need to be able to access any of them at a moment’s notice. Sometimes it’s just Harry and a trio or quartet with improv, which means I may have to busk completely. I have to be able to take a trio look and build on it quickly. Flexibility is key.”

Halpain points out that Connick likes to keep up with the latest technology for every aspect of his show. “The band members have computers using the proprietary Connick Viewer™ for their sheet music – they’re in the same boat we’re in where the ability to move around quickly is of the utmost importance. We’re not using any conventional fixtures for Harry – only moving lights and LEDs. It’s a smaller rig but very well laid out and utilised.”

The complement of fixtures used for Connick’s Broadway performances included Martin and Vari*Lite Moving Lights plus Pixel Line LED-fixtures and Elation Elar 108 PARs. All were supplied by MAS Lighting.

Halpain’s grandMA2 experience has been so positive that he says, “I don’t see myself using anything else in the near future. I definitely believe the grandMA2 will become the industry standard.”

Lighting designer Ted Wells was brought in to help design the lighting for the multi-camera recording of the Broadway concert for TV. George “Chip” Davis was head electrician and John Robison the tech for the “Your Songs” tour and Broadway run. A.C.T Lighting is the exclusive distributor of the grandMA in North America.

Middle East got all that jazz: grandMA went with Skywards Dubai International Jazz Festival
A consummate fusion of old and new: The Fugard Theatre counts on grandMA2
Art and History: “Concert of Light” and grandMA enchant Jerusalem