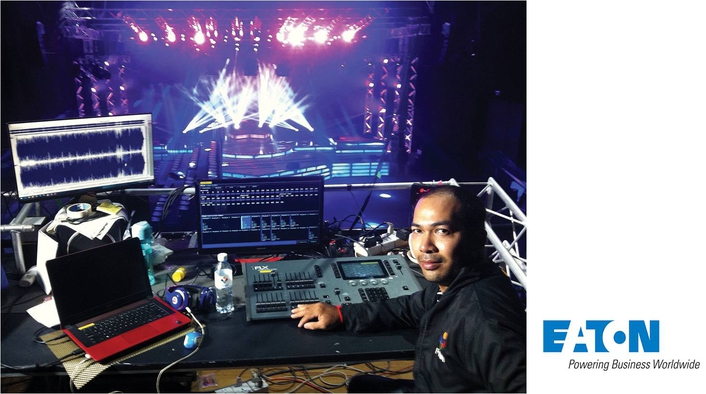 Johnny Strife, head of lighting and lighting designer at PNN TV in Cambodia ... has been announced as the lucky winner of Zero 88’s popular ‘In Control’ competition … and he’s chosen a Zero 88 FLX console as his prize.

Johnny is absolutely delighted! He could hardly believe it when he opened his FB page and found Zero 88’s congratulations message, “I was so excited!! I will use the new console to control many more performances,” he declared.

The competition was extremely well received and open to anyone working with, using or owning a Zero 88 lighting control product – desks or dimmers - or even anyone even thinking about it!

Entrants snapped a photo of their Zero 88 product ‘in control’ in a real lighting environment and submitted this together with a short caption to the Zero 88 team via social media or Email. The entries were examined closely by a panel of experts … and then the winner announced.

Johnny has been using a Zero 88 FLX console at PNN where he heads the lighting team and lights a wide variety of shows from sporting events to entertainment and news programmes to music shows of all genres … so he has an ultimate need for flexible lighting control!
He captioned his photo "Zero 88 in control… at PNN Sunday Super Concert Live, Khmer Battle Boxing Live, Chit Chat Show Pre-Record”, and apart from the caption itself being animated and lively, the judges liked the composition, showing a stage set in the background with equipment around the console.

“The judges felt this was a perfect expression of an operator “in control” in a modern lighting control scenario; surrounded by the tools of his trade, with the stage  ready in the background the operator still looks cool and relaxed as he also prepares his next show during the downtime,” stated Eaton Zero 88’s General Manager, David Catterall.
Johnny has been a lighting professional for the last eight years in the Cambodian media sector - a dynamic and constantly moving environment currently attracting lots of private sector investment. Technically this gives rise to lots of multi-tasking, so a lighting designer needs to be highly adaptable and have a good understanding of how light works in many different scenarios.

With this goes the need for the most flexible control equipment! So he was very pleased to start using a FLX console around 6 months ago when he joined PNN which was launched in 2015 with the largest studio in the country in Phnom Penh and nationwide broadcast coverage.

Before then Johnny worked in a similar role at the Cambodian Television Network (CTN) where he used Zero 88’s Solution control platform for around four years and was very familiar with the brand’s intuitive programming architecture. A typical PNN studio show will utilize around 26 moving lights, 20 LED PARs, around 30 dimmed sources, four hazers ... and maybe a few more fixtures if there’s enough programming time! He really likes numerous features of the FLX including the one touch colouring function which makes colour selection quick, easy and accurate.

Working at PNN ensures there are a great variety of different shows to light and every day he can learn something new. His work schedule is extremely busy, but when he does get any time off, he enjoys being with his young family and engaging in online geekery to find information on the latest and most interesting lighting technologies and trends.